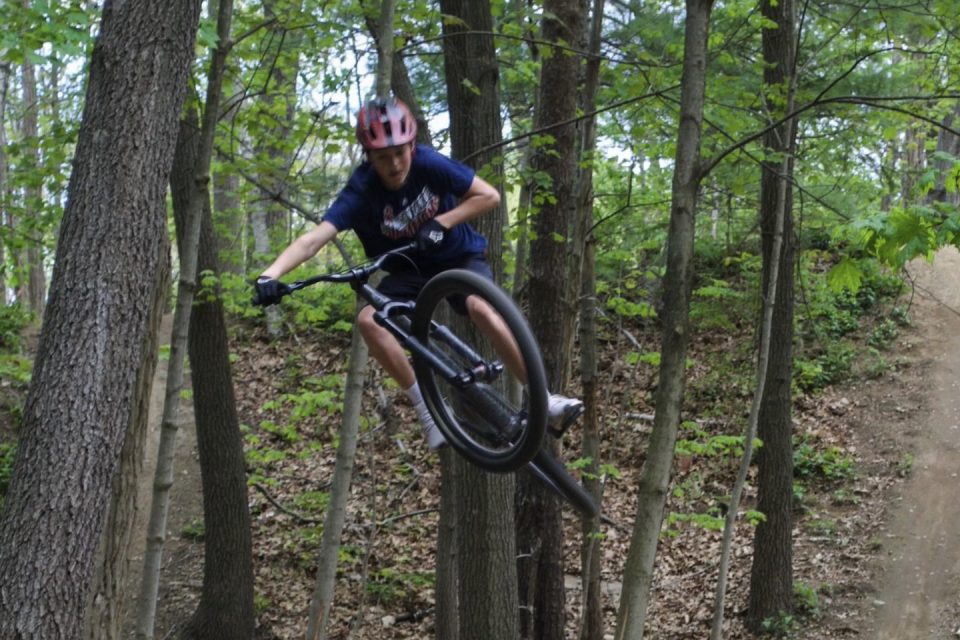 Photo provided by presentation to the Parks Commission. A biker using one of the jumps at March's Hill Park.

The move comes when the Parks Department and Parks Commission faced several tough challenges – the battle with residents over a series of bicycle jumps, built by middle schoolers, in the March’s Hill woods and one with the Pioneer League over building four pickleball courts beside its baseball-softball diamonds at Lower Atkinson Park.

The Parks Commission will continue dealing with these issues, although it was not clear which department would have jurisdiction over them.

“As parks director, it has been my distinct honor and pleasure to serve the residents of Newburyport for the past 16 years,” Reid wrote in a statement. “I wish Mayor Reardon and DPS Director (Tony) Furnari the very best and pray for the future of our city’s parks. We have accomplished so much since 2006.”

Reid was named the city’s first full-time parks director in 2014 after being a part-time employee for eight years. Her department, which has eight employees, managed the approximately 100 acres of parks, including the Clipper City Rail Trail and Harborwalk.

The Community Paradigm Associates of Plymouth in an independent study, commissioned by the city last year, recommended that the parks director position be eliminated to streamline operations and cut costs.

The study recommended that the Parks Department maintenance crew be moved to the Department of Public Services and adult recreation programming be combined with the Youth & Recreation Services Department.

“The city has a highly effective team of department heads, but it is always helpful to have a professional, outside review with a fresh set of eyes,” Reardon said Friday.

In recent weeks, Reid has come under attack from at least one member of the Parks Commission over her handling of youths building a series of wood and dirt jumps in the hilly woods of March’s Hill.

The commission, after listening to more than an hour of arguments from the young bikers, their parents and the neighbors, postponed approval of a proposed pump track that would be built at the base of a city water tower at March’s Hill. Commissioners promised to look for a solution to the already existing mountain bike system of track and jumps in the woods nearby.

The tracks and jumps were built and used by the bikers themselves with little supervision and questionable approval from the Parks Commission.

Reid was sharply criticized for a lack of supervision over the bikers’ construction of the tracks and jumps.

“This is not about what the kids have done wrong. It is about what the city has not done,” said a neighbor Steve Mullen, who complained that the bikers’ activities “are totally out of control.”

Parks Commissioner Paul Swindlehurst said, “I think we could have done a better job.”

In a move that did not endear her to the commissioners, Reid shot back that it was the commission, not the parks department, that approved the bikers-built trails and jumps in 2020.

The Pioneer League and neighbors of Lower Atkinson have strongly opposed construction of the pickleball courts on an unused basketball court next to two baseball and softball diamonds. The league with hundreds of members maintain those diamonds for the city although it currently does not have a lease.

The league and neighbors objected to the noise created by the sport of pickleball. It also questioned whether there was enough parking space for another 16 to 20 cars along Merrimac Street.

The mayor may present the recommendations by Community Paradigm to the city council this week.