Electing Kelcourse’s Successor May Be Complicated 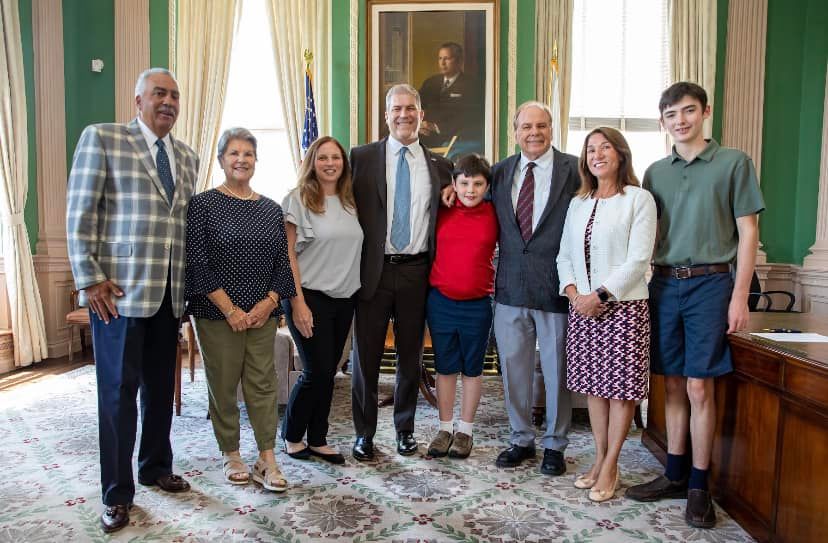 Photo provided by Jim Kelcourse. Jim Kelcourse with his family and Frank Cousins, far left, at his swearing in.

REGIONAL — Jim Kelcourse resigned last week from what he described as “the best job I’ve ever had” as the state Representative for the northern Essex County communities of Amesbury, Newburyport and Salisbury.

But replacing the popular state legislator will not be easy – for several reasons.

Kelcourse, who was sworn in Wednesday as member of the state Parole Board, is already on legislative ballots that have been printed for the September primary. And no one is running against him.

The municipal clerks, who oversee elections, have been scrambling to figure out how his successor will be elected.

“I’m going to let the clerks work that out,” Kelcourse said, who was already at work at the parole board headquarters in Natick and will be presiding this week over meetings to determine the fate of prisoners.

The plan now, as outlined by Newburyport City Clerk Richard Jones, who is working with Salisbury town clerk Melinda Morrison, is to have Kelcourse withdraw from the state House again after the September primary, in time for the November election.

To make this election even more complicated, the boundaries of the First Essex House district have changed. Newburyport and Salisbury are still in the district, but Amesbury has been split between two districts. And Merrimac has been added.

Because Kelcourse will win the primary because he is unopposed, the Republican Party in the First Essex House district will meet in the fall to choose a candidate to run in the November election, Jones said.

The Democrats will have to mount a write-in campaign for its candidate in the November election, he said.

“The more I think about it, the more it seems right,” Jones said.

Two people, Dawne Shand of Newburyport and Samson Racioppi of Salisbury, have already announced to the state Office of Campaign and Political Finance that they will form committees for a possible run for Kelcourse’s House seat.

Kelcourse said he is excited about joining the parole board. “I get to do public service in a whole different way,” he said. “I wake up every morning thinking about it.”

But he admits he will miss being a state legislator, where he brought in millions of dollars of state funds to help the district. He said he will miss attending senior center breakfasts in Salisbury and taking his sons to Yankee Homecoming events.

In his farewell address to his House colleagues, Kelcourse said, “I will miss this job and this body. I won’t miss running for re-election every two years, but I will miss going door-to-door to talk to people in my district, I will miss picking up the phone at my office and helping someone find a new apartment, or with their unemployment, or a small business with getting their utilities hooked up. I will miss how it feels to help in the way that all of us can and do in this role.”

He promised not to be a stranger on Beacon Hill. “I will also miss the everyday repoire we all had together these last eight years during budget week, on the golf course or at our favorite restaurant, the Kowloon.”

Kelcourse was known for enthusiastically saying ‘yes’ to a variety of events in his district. The former Amesbury High School athlete rowed the Merrimack River to publicize pollution, marched with a Dixie Land band to open the extension to the Clipper Heritage Rail Trail in Newburyport and crashed last winter with Newburyport Mayor Sean Reardon and chamber of commerce president Nate Allard into the Atlantic Ocean off Plum Island to raise money for programs at the Greater Newburyport Chamber of Commerce.

Born in Quincy and raised in Amesbury, Kelcourse served four terms in the House and was an Amesbury city councilor before. “I love this community,” he said.

He said he has built a lot of personal relationships in the district. One of those friendships was with Frank Cousins, the former Essex County Sheriff, who was also a legislator and president of the Greater Newburyport Chamber of Commerce. Cousins and other area dignitaries, including LINK House executive director Gary Gastman, testified for Kelcourse before the Governor’s Council.

The council elected Kelcourse to the parole board on a vote of five to three.

Kelcourse said he is passionate about public service. “Public service is a great gift,” he said in his farewell address. “For as much as I have tried to give it my all in the service of others, and to help whomever I could, I have received so much more in return.”

He said he wished the rest of the country could learn, as he has, from the friendships he has made serving in the House. “I think we would be in a much better place as a country if we all realized the virtues of respecting each other, learning from each other, valuing different views rather than denigrating or misrepresenting them, and making friends with one another. While we might not always agree, we don’t have to be disagreeable,” he said.

Kelcourse said he has always tried to live by words of wisdom from his grandmother. “My grandmother always taught me to treat everyone the way I wanted to be treated,” he said.