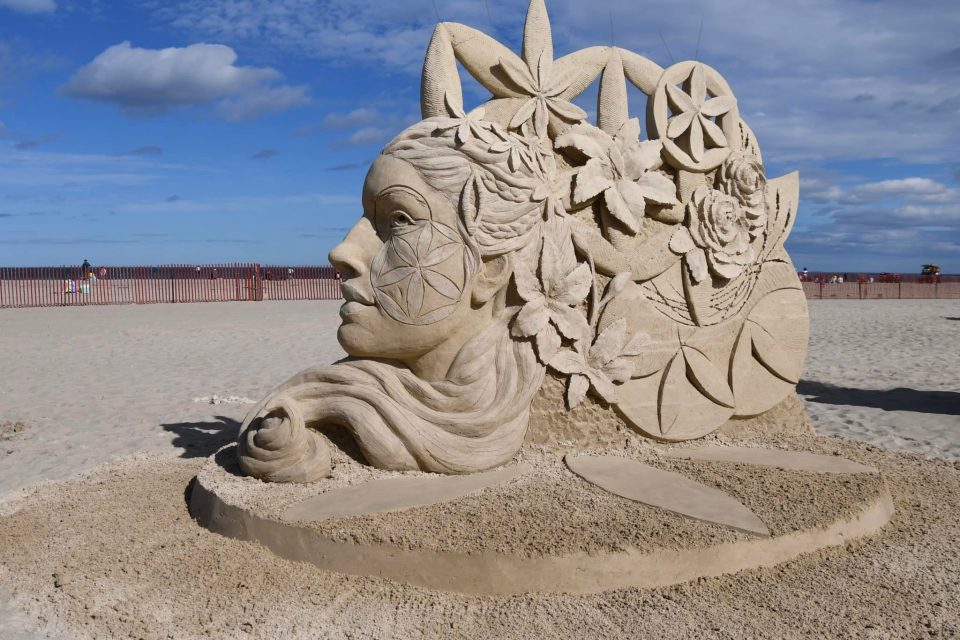 Oh my God this is amazing, Beauregard said.This is an awesome event, and you are always competing against amazing sculptors. It’s awesome just to be here.

For her sculpture entitled “I Am Life,” Beauregard took home $6,000 for first place and another $1,000 for the People’s Choice Award. Her two-sided sculpture shows life on one side and death on the other.

Mint’s release of the state’s New Hampshire Quarter. Local artist and master sand sculptor Greg Grady was commissioned by the Mint to create a larger-than-life replica of the new tail side edition of the New Hampshire quarter. It was made out of ten tons of sand during the Hampton Beach Children’s Festival.

The Hampton Beach Sand Sculpture Competition proved so popular, it has grown to be the largest Masters competition of sand sculpting in the northeast.

For 2022, 10 world-class sculptors competed to make their mark, creating astonishing works of art out of shapeless heaps of sand. The competitors, who competed for $25,000 in purse and entry awards came from Canada, California, Ohio and Hawaii. In addition to Grady, who lives in Derry, NH, two competitors were from the Northshore — Justin Gordon from Groveland and Darlene Duggan from Essex.

Third place and $3,000 went to Carl Jara of Lyndhurst, Ohio, for Entropy, and fourth place and $2,000 went to Rusty Croft, of Carmel, CA, for Transition.

Grady, the event organizer, won the Governor’s Award, selected by Gov. Chris Sununu, for his sculpture, entitled Wyvern Whisperer. He said his sculpture of a two-legged dragon was for his son, who loves superheroes.

For this year’s event, Grady, the event organizer, and his Grady Bunch brought in 220 tons of imported sand.

When completed, the sculptures are sprayed with windscreen (a solution of school glue and water) to protect them from the elements and remain standing for viewing through June 26. It is a free museum of master pieces on the beach, which is illuminated for night viewing.