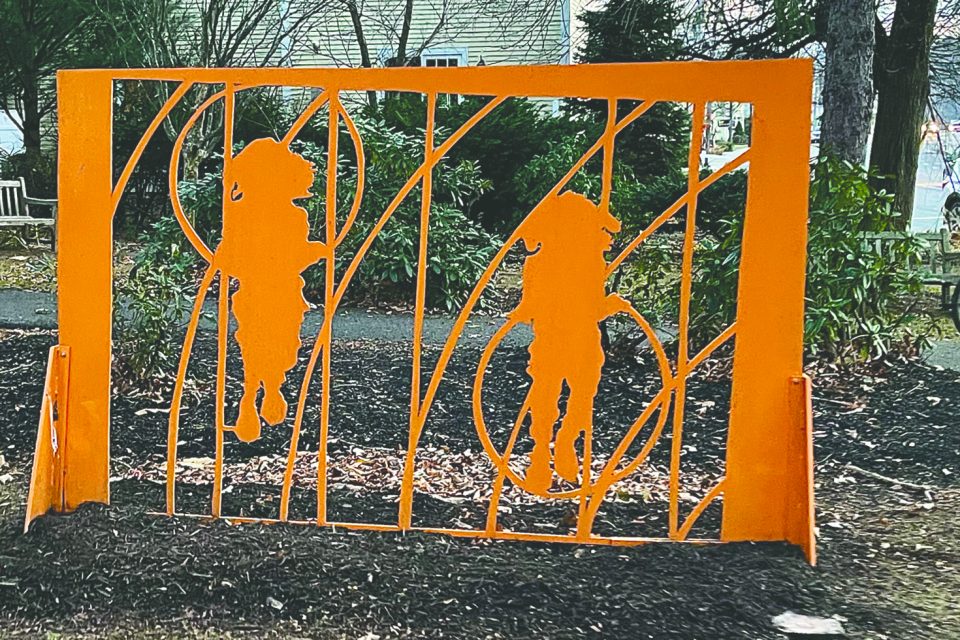 TOPSFIELD — The Topsfield Town Library hosts an impressive art collection within its walls, and recently, the library has expanded its commitment to public art with a temporary outdoor sculpture.

Last week, the library installed a painted aluminum sculpture titled “Piston” by the artist James Myer in front of the historic library building. The coming weeks will see the installation of two additional sculptures, “Full Bloom” by Jac Ouellette and “Tre’” by Shawn Farrell.

“The Town Administrator, Kevin Harutunian, started talking about outdoor art in February of 2020, but we put it on the backburner because of Covid,” said Topsfield Town Library Director Zalewski.

The library itself has a long history of being a center of the arts in Topsfield with paintings and sculptures on display throughout the building thanks in large part to a bequest from George Gould, an original contributor to the 1935 building. Gould’s will, which was revealed in 1988, expressed “his strong conviction that the Topsfield Town Library should not only be a repository of the printed word but also a cultural center promoting the aesthetic in the lives of Topsfield residents.”

While the onset of the pandemic in 2020 put a damper on any new projects at the library, the ensuing months only highlighted the fact there was a need and desire in the community for outdoor art and activities.

“Covid showed us that there were opportunities for the outdoors that we have never really taken advantage of,” said Zalewski.

After the meetings, Zalewski said the trustees believed they could get an outdoor sculpture exhibit up and running this year, and approached the Gould trust commissioners to see if the library could change its direction from indoor art to outdoor art.

“They were also very excited about the concept of outdoor art,” Zalewski said.

The library trustees also went to the Historic Commission and received a certificate of appropriateness allowing for the installation of the sculptures in the historic district.

“I think this is going to spark a lot of interest in the library and as a gateway to the downtown,” said Zalewski.

After all three sculptures are installed on the library grounds, Zalewski said there will likely be an event at the library marking the exhibit. She said hands-on events and programs featuring the three artists are also possible in the coming year.

Select Board member Boyd Jackson said he couldn’t wait to see all three sculptures in place.

“I think the library is the center of art in the town of Topsfield, and in my opinion, that is where (the sculptures) belong and where they ought to stay,” Jackson said.

The three artists involved in the exhibit all have long and impressive backgrounds in the arts.

Meyer, who is of Mexican heritage,attended the School of Visual Arts in New York City and became the studio assistant to Jasper Johns in 1985. He has exhibited his own work in New York City since the early 80s and has lived and worked in Connecticut since the mid 90s with his wife and two children. With his wife and other artists in the area, he developed the artgarage, an after school open art studio where students can work on long-term projects under the supervision of local working artists.

Ouellette’s love for metal started as a young child in her great great grandfather’s forge in Northern Maine. Later in life, while working in the medical field, she attended a blacksmith  intensive at Haystack Mountain School of Crafts in Deer Isle, Maine. She was then inspired to pursue formal studies in art and enrolled in the Maine College of Art. She graduated from MECA in 2002, earning her BFA with honors. Since then, her interests have evolved to include vibrant metal sculptures and colorful oil painted landscapes.

Farrell is an artist and educator living in Hamilton and received a BFA from Hartwick College where he specialized in glassblowing and bronze foundry. He honed his techniques on the West Coast working for artists from Alaska to Mexico. He has displayed his work in various galleries and done many private commissions. Farrell prefers to not limit himself to one medium, but finds himself continually drawn to working with glass and metal.