Who Will Pay to Rebuild Carleton Drive? 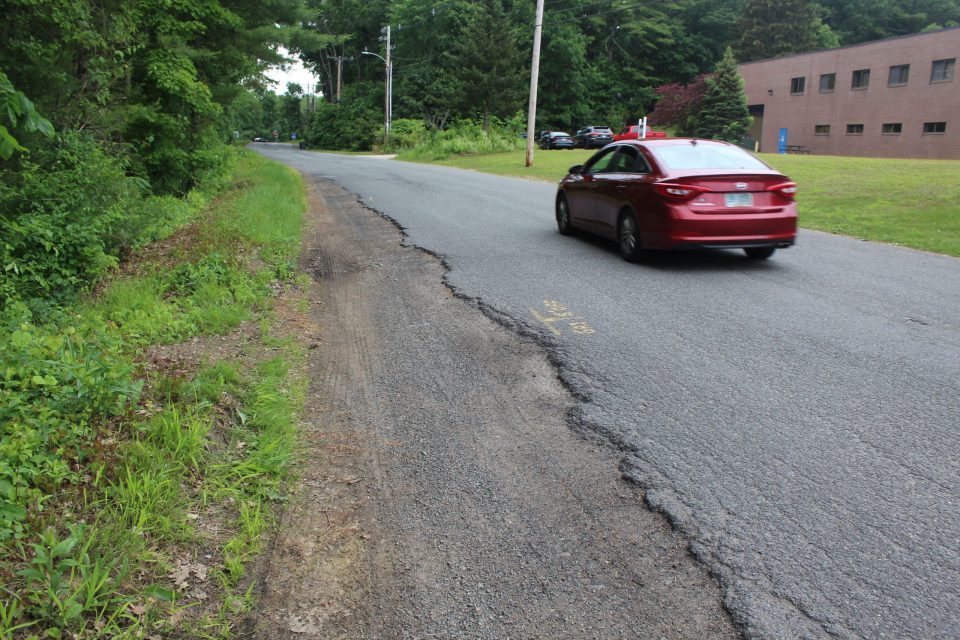 GEORGETOWN – Carleton Drive must be totally rebuilt if it is to support hundreds of new vehicles from tractor trailers and packer trucks to cars and pickups, handling trash at the proposed 500-ton transfer station, the Planning Board learned last week.

It is unclear who is going to pay for the new road. The Planning Board may ask G. Mello Disposal Corp., which wants to build the facility, to write the big check. Mello may want to share the cost with the taxpayers.

The 1,600-foot road, which is fraying on the edges, was tested in recent weeks with 11 core drillings to ascertain what is beneath the asphalt. Miller Engineering found a lot of sand and water. 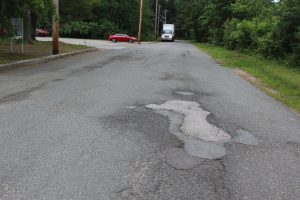 A total rebuild of the road would mean starting with 20 inches of gravel as the base, topped with 12 more inches of crushed gravel, 3 inches of binding material and 2 inches of asphalt on top, Miller Engineering’s report said.

The Planning Board is now asking what a new road might cost.

Mello has proposed that as a condition of receiving a permit to build the new transfer station, the company would resurface the road, laying down the 2-inch topping on the existing base. But when asked if the company would pay for the new base for the road, Mello’s attorney, Nancy McCann, reminded the board that other trucks use Carleton Drive.

“The applicant will accept a condition that requires it work with the town’s DPW (Department of Public Works),” McCann said. “Is that what Georgetown does for its roads?”

Town Planner John Cashell said municipalities usually require the developer to build any new or improved roads. And it would be the town’s Board of Supervisors, not the Planning Board, that accepts improvements of public streets, he said.

Georgetown does not have a public works department. Its streets are supervised by a highway surveyor.

The Planning Board meeting last week started off with fireworks when the private traffic engineers, employed by Mello, accused an opponent, Jon Samel, of manipulating videos he took of trucks entering Carleton Drive from East Main Street.

At the last meeting in May, the planning board members were presented with two different sets of videos. Mello provided ones its consultants shot from a drone, showing trucks could navigate the sharp turn into and exiting Carleton Drive without crossing into the on-coming lanes.

Samel, who owns a business on Carleton Drive, used a camera at ground level to shoot a series of videos that showed trucks entering and exiting Carleton Drive. Most of the trucks were fully loaded and crossed into the opposing lane of traffic.

If there had been exiting traffic at the intersection, there could have been an accident or one vehicle or the other would have had to stop and let the other proceed.

“I have hundreds of hours of tapes. You are welcome to review them,” Samel told Rebecca Brown, a traffic engineer with GPI, a contractor to Mello for this project. “They are raw tapes. They are not doctored. They have not been modified.”

Kristin Braun, a traffic engineer hired by the Planning Board, said plans to add center striping and a stop line near the entrance to East Main Street would help keep trucks and cars from colliding. She said MassDOT guidelines allow trucks to cross the center line when making a turn.

Board members questioned how that would work if cars and trucks were lined up at the intersection.

Brown conceded that some trucks would cross the center line in turning into Carleton Drive. She proposed that the board limit the hours of transport to the transfer station to off-peak daytime hours.

The Planning Board is also seeking a way to deal with potential backups in traffic at the intersection of Carleton Drive and East Main Street.

Traffic engineer Brown, who is working with Mello, said its analysis predicts there would not be more than six vehicles backed up to exit Carleton Drive.

Samel, who owns Cambridgeport, a business that is served by large delivery trucks, said there are more than six vehicles in the queue to exit Carleton Drive every day at shift change.

“If it does cause a backup, how do we deal with it then?” asked Planning Board chair Harry LaCortiglia.

The chair was echoed by board member Robert Watt, who said, “What could possibly go wrong? We’ll see is not good enough.”

LaCortiglia said he is “at a loss” how to write a condition to the building permit for Mello’s project that can deal with a backup at the intersection.

It was suggested that the police could monitor the traffic from a camera overlooking the intersection. When traffic backed up, a police detail could be dispatched.

McCann reminded the board that the applicant of this project is Jason Mello, who has done a lot to benefit the town of Georgetown.