Gibson Brothers at The Firehouse 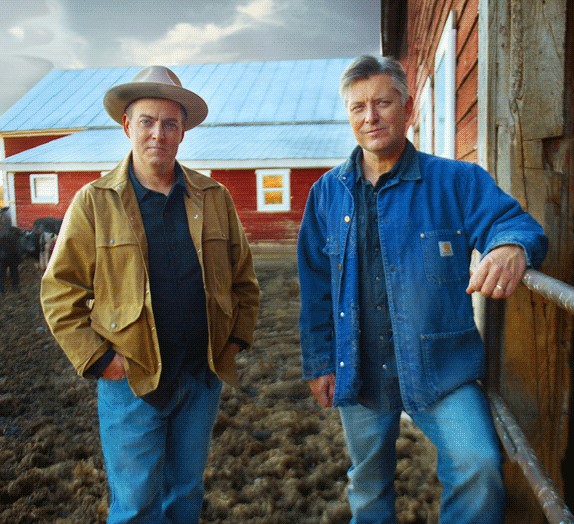 NEWBURYPORT – If you are a Bluegrass music fan, here’s some good news to help warm your winter.
You don’t have to wait to whet your appetite until the Steel Drivers arrive in late April for the Belleville Roots Music Series performance. The Gibson Brothers are making the Firehouse Theater one of their early stops on a tour to unveil the forthcoming album, Darkest Hour.
“It’s not every day that you get asked to be part of an Album Release Tour,” wrote John Moynihan, the Firehouse director. “On Jan. 29 at 7 p.m. that’s just what you’ll witness at the Firehouse. The Firehouse is one of the first stops on their tour in support of it.”
Two days after the award-winning Eric and Leigh Gibson release their latest album, the brothers will perform here with Sierra Hull, the 28-year-old mandolin player who debuted on the Grand Ol’ Opry at age 10 and played Carnegie Hall at age 12.
The Gibsons, who live in upstate New York, have played in Newburyport at least four times, recalls Ken Irwin, founder of the Belleville Roots. They have played at Belleville once and the Rhythm and Roots waterfront concert once plus another venue twice.
“It’s great stuff,” Irwin said. People in Newburyport are familiar with the Gibson Brothers’ music, which he compared to the Everly Brothers. The audience will also enjoy their brother-to-brother humor, which he compared to the Smothers Brothers’ banter, Irwin said.
The Gibsons will open their tour in Connecticut before moving to Massachusetts for two concerts. Newburyport is close enough to Boston, which has lost its top Bluegrass venue, to tap into fans there. After performing here, the brothers head to New York for three stops, then turn south, ending in Nashville, TN in mid-February.
The album, Darkest Hour, is produced by Jerry Douglas, who has won 14 Grammys and backed up Ray Charles, Paul Simon and George Jones.
The Gibson Brothers began making their latest album in March, 2020, after finishing a tour. Shortly Covid-19 stuck, shutting down recording studios and performance venues. “We were in Nashville the week everything was shutting down. It was surreal,” Eric Gibson said.
At Douglas’ suggestion, they spent the next few weeks selecting the best songs and cutting acoustic material. When things opened again after the Pandemic, they finished the album in February 2021.
Reviewers are calling the album, their best yet. The songs on the album feature Mike Barber on bass, Justin Moses on mandolin, Eamon McGloughlin on fiddle, Douglas and John Gardner on drums, Guthrie Trapp on electric guitar and Todd Parks on bass. Allison Krauss joins the brothers singing on one track.
Darkest Hour showcases how easily the Gibsons move from country soul to high-octane bluegrass, said one reviewer.
“That’s what I love about these guys,” Douglas said. “They are just great songwriters.”
Tickets are $30 for Firehouse members, $35 for non-members. Buy tickets at: www.firehouse.org/event/the-gibson-brothers/.