Redo of North End Blvd.: Not Yet 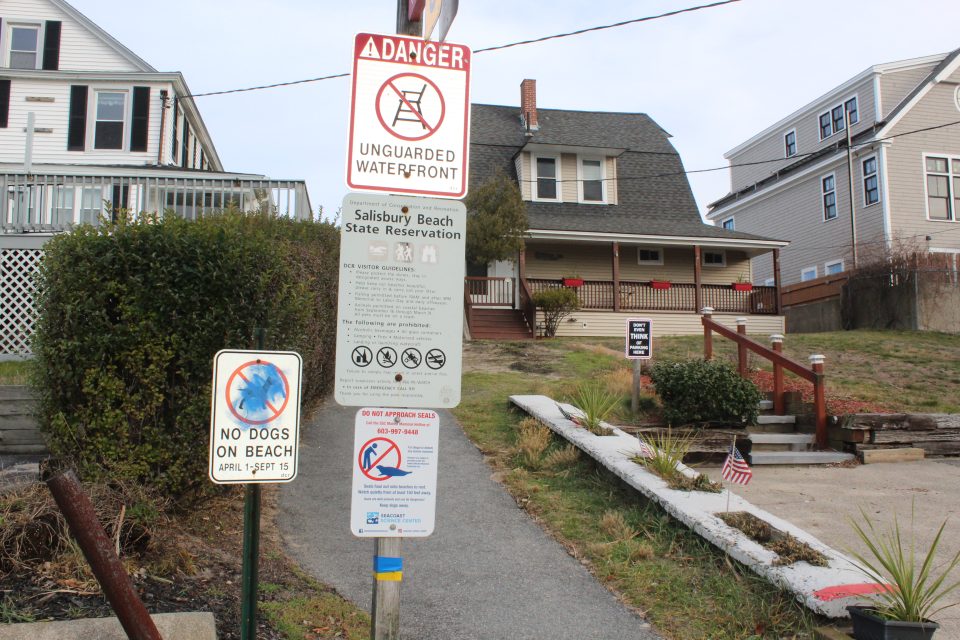 SALISBURY – Driving North End Boulevard, particularly in the beach-going months, is a challenge for cars, pedestrians and bicycles.
“North End Boulevard is a very, very dangerous roadway,” town manager Neil Harrington told a well-attended briefing by the state Department of Transportation last week.
Vehicles travel too fast on the straightaway road, forcing beachgoers and bicyclists to take risks crossing it. Water puddles on the road and the pavement is broken and cracking. Parked vehicles often stick bumpers well out into the road.
“No design in the world will solve all the problems,” Harrington said. “Slowing the traffic down will help.”
But Harrington, members of the Select Board and most of the 99 residents who attended the virtual briefing thought the proposed redesign of the popular roadway would be a significant improvement.
“I think you have hit a home run” with this design, Takesian said.
But not yet. The DOT officials could not predict when the reconstruction would start.
The design phase is still less than 25 percent finished and will include resurfacing the road, adding protected pedestrian and bicycle lanes and improving sight lines and water drainage from the roadway.
When it reaches the 25 percent design mark in the next few weeks, DOT officials said they can estimate the ultimate costs of the redesign and identify sources of funding for the construction project. They can also estimate when the reconstruction will begin.
Speed along the boulevard was a foremost issue. North End speed limits range from 35 to 45 miles per hour currently. But state officials, which do not set speed limits, maintained that several of the improvements, including narrowing the travel lanes and adding bump outs at crosswalks, will force vehicles to slow down.
“It won’t be an unimpeded, straight-away,” Harrington said.
The designer, Jacob Design Team, presented four options for the roadway, but said the consensus among beach residents and Salisbury public officials was in favor of building two 10.5-foot lanes on the east side of the roadway.
The 5-foot bike lane and 5.5-foot pedestrian walkway run side-by-side on the west side. There would also be a 7-foot shoulder for parking and will serve as a buffer between the travel lanes and the pedestrian-bike lanes.
Bump outs, which improve sightlines for motorists and pedestrians, would be built at 15 or 16 crosswalks along the roadway. Crosswalks would be repainted in bright yellow to improve safety.
Harrington said the practice of parking vehicles partially in the roadway would no longer be allowed.
On the west side, property owners would see their driveways extended pass the shared pathway and shoulder. Resident Joyce Smith said it is already difficult to exit her driveway because bicyclists “don’t stop for anybody.” She said the town should impose rules on the bicyclists to follow.
Don Egan with the Salisbury Beach Betterment Assn. said he thinks the 10.5-foot travel lanes will be too narrow.
DOT officials disagreed. The narrower lanes will force drivers to slow down.
Brian Fallon, DOT project engineer, said, “We don’t expect any issues with 10 and a half foot lanes.” Once construction is completed, the state will conduct a traffic study to see if is slowing down traffic.
The engineers are also working to square up the intersection with Central Avenue, which comes to the boulevard at a sharp angle that has proved dangerous for motorists.
To contact DOT, send your comments to Carrie LaVallee at MassDOT, 10 Park Plaza, Boston, 02116. Or email at projectmanagement@dot.state.ma.us. The project number is 607710.