A Special Chair to Honor POWs/MIAs 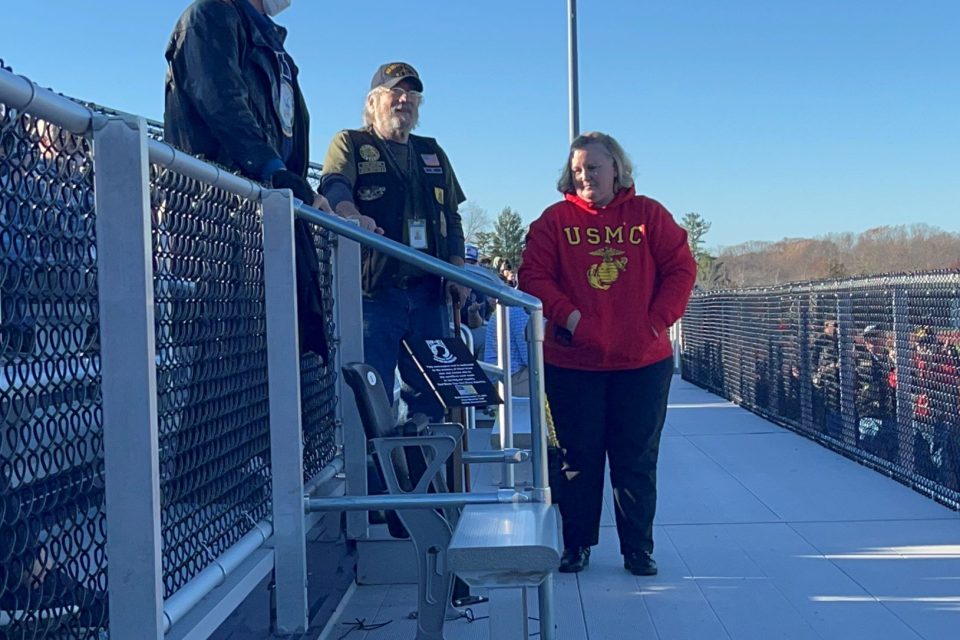 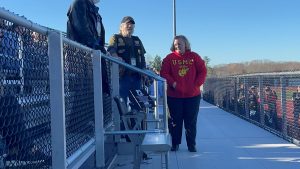 TRITON REGIONAL SCHOOL DISTRICT – Next Spring at the graduation of the high school class of 2023 or in the fall when Triton is playing a rival football team, the stadium on the Triton campus may have standing room only. People may have to lean against the fence because there is not a single seat in the stadium vacant – except for one.

But that seat is “sacred,” said Marine veteran Michael Vanderslice, a Triton Spanish teacher. The seat, cordoned off with a permanent sign explaining its significance, was dedicated by the administration, students and faculty the day before Veterans Day to honor the 82,000 soldiers who are never coming home after being a prisoner of war or missing in action in wars since World War II.

It is one of the few chairs that honor POWs and MIAs in high school football stadiums across the country.
“What you do today is critically important,” newly reelected state Sen. Bruce Tarr, who represents the Triton community and much of the North Shore, told the students. “It is inspirational. I am proud to be with you.”
Tarr said of the POWs/MIAs, “We express our love for them, our loyalty to them. We will never, ever forget them.”
The ceremony, organized by junior Douglas Aylward, who was the master of ceremonies, featured several students who read poems about the value of sacrifice, honor and loyalty, sang the National Anthem and closed the ceremony with taps. Students, faculty and the school’s grounds crew also set up the stage and brought the public address system.

On the Marine Corps’ 247th birthday, Vanderslice said, “We choose to say here is a special place, a sacred space.” He told the story of a sailor during World War II, who gave up his life in a damaged submarine so other sailors could continue to have oxygen.

In front of American, POW/MIA and Triton flags, the stage included a Missing Man table. As explained by students David Pugh and Parker Heritgan, the small table stood as a symbol for the solider who was alone and suffering an unknown fate and for their families who would never know their fate.

Don Jarvis, a Triton graduate and Army veteran of the Afghanistan and Iraq wars, donated the chair, working with Karen Taylor, the veterans agent, and Tracy Goodwin.

Aylward was recognized by Tarr with a proclamation from the state Senate recognizing his contribution to the event.