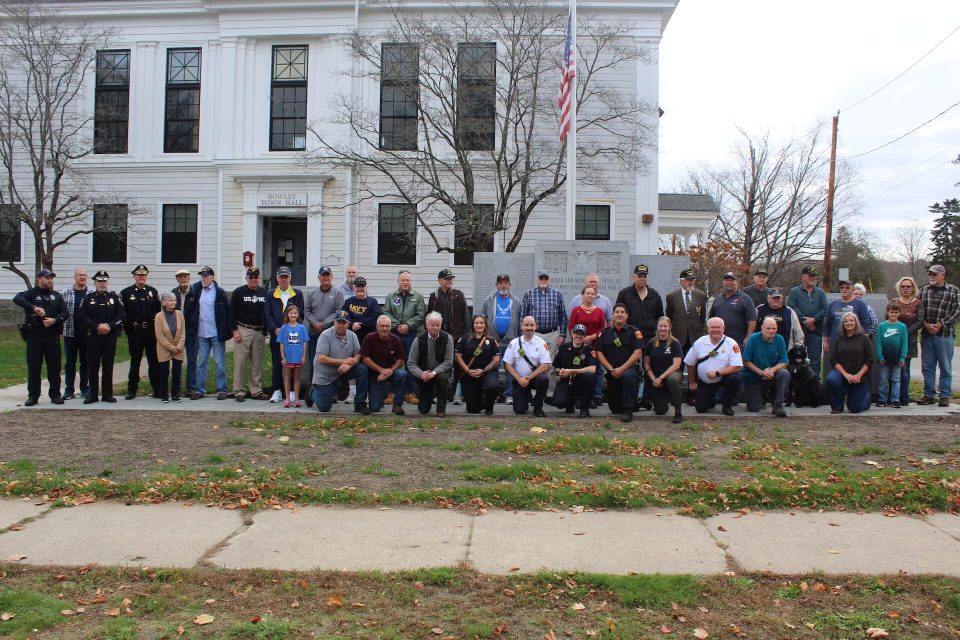 ROWLEY – At 11 a.m. last Friday, the 11th day of the 11th month, Bob Breaker, a Coast Guard veteran and chair of the town’s Veterans Committee, raised the American flag in front of Town Hall to fly above four newly cleaned granite markers honoring local veterans who served in the World Wars, the Korean Conflict and the Vietnam War.

The Veterans Day ceremony, which attracted dozens of veterans, their family members and public officials, showcased a new sidewalk that makes it easier to view the monuments.
On his daily walks with his dog, Breaker, whom town Select Board Chair Bob Snow called “the chief of the boat,” said he has seen people using the new walkway to get closer to the monuments so they could read the names carved there.

The project, which was funded by state grants, has made the Town Hall front yard more attractive. “It needed some work,” Breaker said.
After he received a request from Vietnam War veteran Gerald Kent to have his name added to the monument, Breaker worked with former state Rep. Brad Hill and state Sen. Bruce Tarr, R-Gloucester, to secure $50,000 as an earmark in the state budget. He combined that appropriation with a foundation grant of $25,000 from Secretary of State Bill Galvan’s office to pay for the stone walkway.

The next phase of the project is to honor those residents who have died in the War Against Global Terrorism. That would include those who died in Afghanistan and Iraq.
Breaker also wanted to have the stone honoring those who died in Vietnam redone. It and the Korean Conflict monuments are smaller, and about half of the 150 names on the Vietnam monument had to be on the rear of the stone. Breaker would like to replace it with a larger stone so all the names of the Vietnam War dead could be read from the front.
Select Board chair Robert Snow, a Marine veteran, used the event to express his concern about the number of veterans, who are suffering from war-related post-traumatic stress. Dozens of veterans every day commit suicides.

“Be the one,” he said. “If you see a younger veteran having problems, say something.”

The granite was cleaned by TJ Painting and Cleaning, who was assisted by Ron Garron, a member of the Veterans Committee. Ron and Tammy Garron head the Wreaths Across America program.

The Wreaths Across America ceremony is scheduled for 10 a.m. on Dec. 17 at the Rowley cemetery.