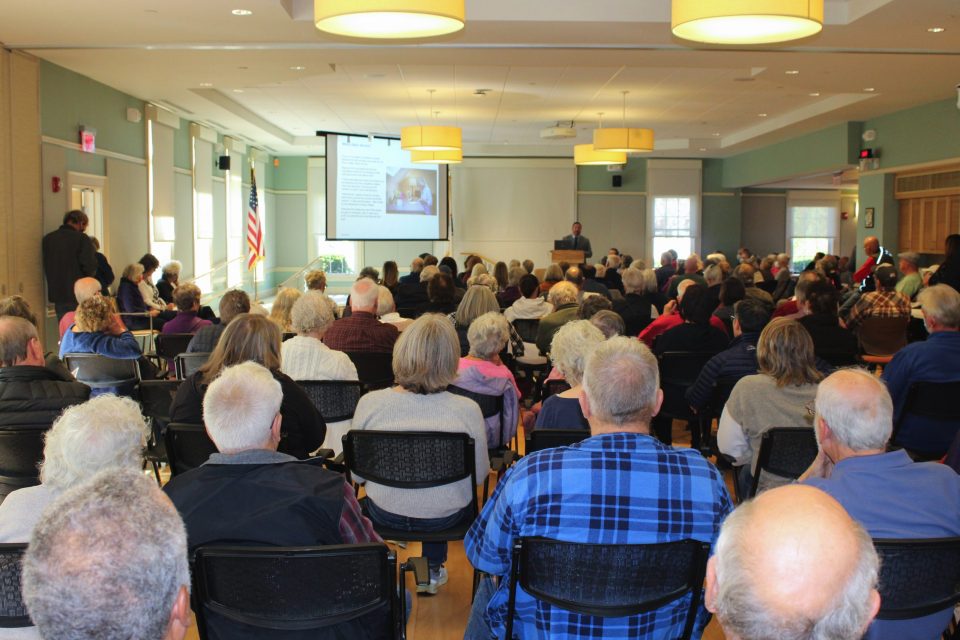 REGIONAL — In the wake of National Grid’s announcement that electricity costs are rising by 64 percent starting Nov. 1, the city of Newburyport expects to offer residents a lower rate through a new electricity aggregation program by January.

For National Grid’s 1.3 million customers in the commonwealth, the price of electricity will rise from 14.8 cents a kilowatt hour (kWh) last winter to 33.9 cents this winter, the highest level ever.

A typical customer using 600 kilowatt hours a month is expected to see the monthly bill jump from $179 to $293, an increase of 64 percent.

At a public information session that attracted a standing-room only crowd of politely angry Newburyport residents, Colonial Power President Mark Cappadona said he expects the rate the city’s aggregation company can negotiate will be in the low to mid 20 cents per kilowatt hour (kWh).

He said he hopes to present the fixed price for electricity to Mayor Sean Reardon and Energy Program manager Molly Ettenborough this week.

That rate for Newburyport is higher than neighboring Salisbury, where town manager Neil Harrington recently signed a three-year renewal of its electricity aggregation program for 11.134 cents per kWh.

In an aggregation program, the city buys electricity in bulk, which allows companies like Colonial Power (CPG) of Marlborough to negotiate for a lower rate. Unlike National Grid that is limited to buying electricity two days a year, Colonial can trade for a better price 210 days a year, Cappadona said.

“Electrical aggregation gives the city, residents and businesses more control over the supply of their electricity,” Reardon said earlier. “Contracting directly with an electricity supplier will provide the members of the community the benefit of city oversight and will provide price stability during the term of the contract.”

The city is planning to send residents a notice after the mayor approves the program, residents were told.

All residents will be included in the new program unless they opt out, Cappadona said.

Newburyport will allow residents to opt out and rejoin the program. Salisbury announced that residents who have opted out of its program will not be allowed to rejoin.

One woman at the meeting at the Senior Center criticized Newburyport officials for “not moving faster” in implementing an aggregation program.

The city has been working on an aggregation policy for several years, Cappadona said. In the past when electricity prices were lower and more stable, “there was no need” for the city to sign up for an aggregation program.

Ettenborough, the city’s Energy and Sustainability Manager, said, “We will work with CPG to provide educational information to the community as we progress through the process of selecting an electricity supplier. We hope to select a supplier in the coming weeks and launch the program at the beginning of 2023.”

Towns like Ipswich, which operate their own electricity companies, expect to deliver electricity to city customers this winter at a lower rate. Ipswich Electric Light Department manager Jon Blair said this year’s increases have already been layered in and will amount to about 25 percent.

“We’re actually in a relatively favorable position,” Blair was quoted.

Joe Muraco from National Grid told the Newburyport audience that the price spike, which his company does not control, is caused by constrictions in New England to natural gas production and distribution, due to environmental opposition. This winter, the Ukraine war and Russian cut off natural gas to Europe has turned the energy markets upside down, he said.

About 60 percent of power generation in New England comes from natural gas.

For residential customers, National Grid has not announced a significant increase in the price of natural gas.

What can you do to cope with the rising electricity costs?

In the interim before the city can implement its aggregation program, customers of National Grid can move to a more competitive supplier, Muraco said, although he warned that “there are sharks in the waters” of third-party suppliers.

Customers can also ask National Grid to put them on balanced billing, which levels out their monthly costs throughout the year.

If customers qualify, they can also ask National Grid for a discounted rate, he said.

Muraco urged homeowners to have a free energy audit and insulate their homes better.

To watch a recording of the meeting last week, https://www.youtube.com/watch?v=5BsuGeybvMM.