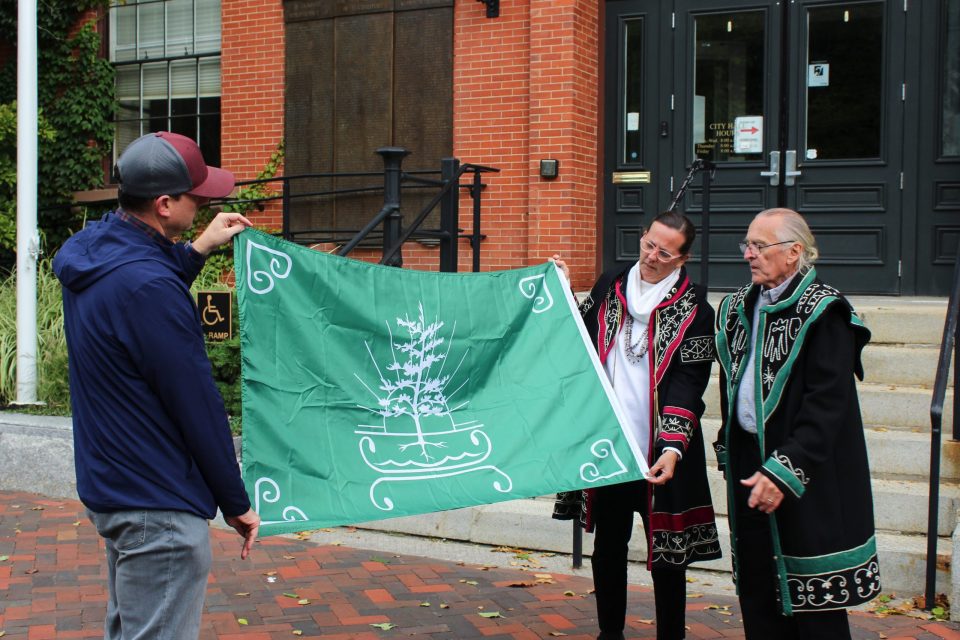 Chief Paul Pouliot and Denise Pouliot, head speakers of the Cowasuck band of the Pennacook Abenaki, hoisted the nation’s green and black flag on one of the poles in front of City Hall. It temporarily replaces the Newburyport flag. The American flag is on the second flagpole.

In February, the Pouliots collaborated with filmmaker Catherine Stewart to create a short film, Swimming Upstream: Indigenous Environmental Justice for Our Waterways, featuring the Great Bay Estuary on the seacoast of New Hampshire.

The ceremonies Saturday will honor the region’s indigenous nations, including the Pennacook, Wabanaki and Mi’kmaq and all Native Peoples. The Pennacook people were primarily fishers, farmers and hunters who lived in bark wigwams until inter-tribal warfare forced them to build fortified longhouses.

Originally, the Pennacook were estimated to have a population of 12,000 living in 30 villages.

The Indigenous Peoples Day festivities will be from 10 a.m. to 3 p.m. on Saturday, Oct. 8 at the Waterfront Park. Events will include:

White Wolf was VP of the “Red Road Foundation,” from 2005 through 2008, which was an educational non-profit organization in New Hampshire that provided programs in schools throughout New England. He taught pre-American history, cultural history, and provided programs in grade levels from grammar school through college, as well as public venues and retirement homes.

White Wolf is Lakota taught for decades, having grown up out west. He also was a member of the Keetoowah Society in NYC, a tribally recognized Cherokee group who performed traditional ceremonies in upstate NY. He was also a member of Hayna Second Sons Powwow Drum group who performed throughout NYC and was host drum for Queen’s Farm Powwow in Forrest Hills, Queen’s NY. He is a Pipe Carrier in both Lakota and Cherokee traditions.

White Wolf is a Northern Plains Traditional Dancer in the realm of the Powwow community. This choice came from his years of immersion in the Plains traditions. As Fire keeper for the Inipi (sweat lodge) and pipe carrier.

At noon, Seth J. Willey, a Cherokee storyteller and drummer from Amesbury will share traditional stories and songs for all ages.

Willey will be followed by students from the River Valley Charter School, who will speak on their thoughts about Indigenous Peoples Day.

Hawk Henries, a member of the Chaubunagungamaug band of Nipmuc, will perform. He is an artist, composer and flute musician. He expertly crafts Eastern Woodlands flutes through ancestral and contemporary techniques. His transformative performances create contemplative spaces for unity and meaningful reflection on how we each have the capacity to make change in the world. Through music, discussion, and a note of humor, he weaves a calm, engaging, and thought-provoking experience.

Mihku Paul is a Wolastoqey writer and visual artist who grew up on a wild Maine river. Her family is from Kingsclear First Nations. She created a one-woman exhibit at the Abbe Museum while a graduate student. Mihku is a fellow this year with the first inaugural Maine Literary Festival.

There will be a special exhibition of sculpture by Joseph Gray, who has been working with stone for four decades, creating pieces using the ancient, hands-on technique of hammer and chisel. As part Abenaki, Gray believes his Native American background plays a key role in his art. “It connects me with the earth and nature. When I am carving an ancestor or spirit animal, I do not know what I am carving when I start. I can feel my ancestors guiding me. It is a spiritual experience for me and I lose myself in every sculpture. I believe I will make an impact on the world with my stone sculpture. A smile and a warming of one’s soul is my goal as a sculptor.”

Gray’s sculpture, “Harboring Thoughts,” was carved for the city of Newburyport and is designed to be placed along the Merrimack River on the clipper city heritage trail.