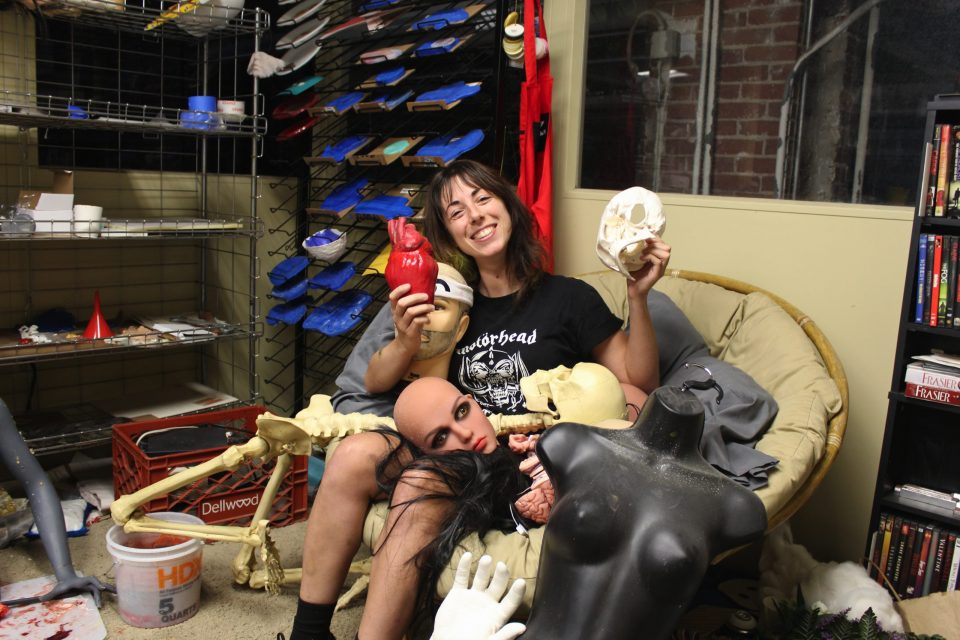 Photo: Stewart Lytle / The Town Common. Anna Belmonte with a few of her creations

AMESBURY – When Mark Haggett, a Gloucester-based actor, director and producer of small films, was looking for a location to shoot his latest Batman film, Riddle Me Batman, Anna Belmonte, who edited the film and supplied the special effect prosthetics, suggested his Deadly Sin production company shoot most of the scenes on the manufacturing floor of CIWorks.

The old mill building, where Belmonte has her studio making realistic looking body parts for films and fun, was the perfect backdrop Haggett wanted for the film.

“(CI Works) has the look,” Belmonte said. “Every floor is different.”

Once the home of a defense contractor, the former ARC Technologies, the building at 11 Chestnut St. is the ideal movie studio backlot, she said. With exposed piping in the ceilings, concrete flooring, metal staircases and much more, it offers filmmakers a lot of backgrounds to shoot.

When it is not acting as a movie studio, the building houses a variety of small and growing manufacturers which make a range of innovative products that, among other things, insulate homes, make 18-wheel trucks more energy efficient, create barn doors out of old wood and produce FlingGolf sticks.

It also has several floors with carpeted office space, conference rooms and a café for accountants, attorneys, mortgage brokers, sports associations and even a non-profit organization that monitors the winds for radiation from the Seabrook nuclear power plant.

For the film with a budget of $10,000, Belmonte also recruited her father, Steve Belmonte, another tenant at CIWorks, whose company, Patriot Vending, stores and repairs vending machines. He plays a Riddler goon.

The film, which stars Haggett as Batman, can be seen on YouTube and at film festivals.

Belmonte, who has helped make a dozen short films, including Summer, an award-winning dark comedy, spends most of her time making fake body parts which sells to movie productions from New England to Hollywood and on Etsy and her web site, Night Fire FX.

What started for her as a hobby now gets millions of views.

Her company, Just Add Water Prosthetics, is busy these days filling orders for Halloween costumes that include fake Cyborg jaws, realistic looking tattoos of lightning bolts and crosses and a variety of prosthetic bite marks for the neck and face. She also makes brains, hearts and hands.

Belmonte produces the fake body parts in her studio. Using a hot plate on her desk, she boils gummies and other candies into colorful liquids that she pours into silicone molds.

“I am always working on new body parts,” she said.

Her studio is a treasure trove of unexpected items from a skeleton in a black wig, whom Belmonte admits she talks to, to mannequins to a unique collection of heads, hands, fingers, hearts and brains.

As a child, Belmonte fell in love with film making. She remembers casting her brothers and friends in movies from the time she was eight, complete with storyboards and three-ring binders for plot twists.

Then someone gave her a make-up kit as a gift. That was a turning point in her movie-making career. With the makeup, “I could make monster movies,” she said.

She has been making and enjoying horror films ever since.

In college she studied art therapy, which she now applies to her films, particularly horror films, because they are the most expressive. “In horror films, they are always blowing things up,” she said. Or one of the characters is taking a bite out of someone’s neck or devouring a fake brain she has made in her studio in Amesbury.

To order your exotic Halloween costume or apply for a role in her next film, contact Belmonte at Night Fire FX.