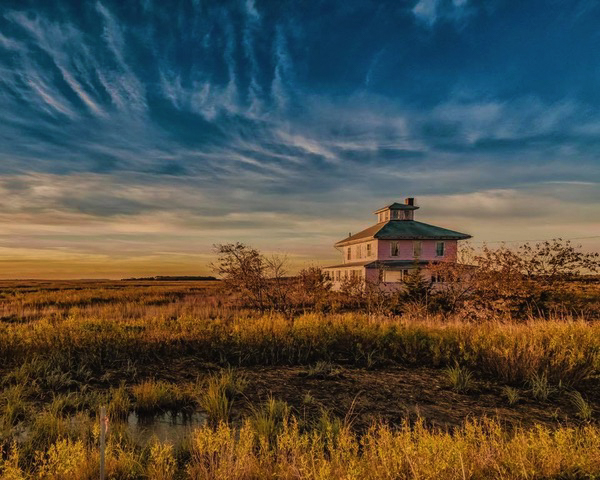 NEWBURY – Supporters of The Pink House (STPH), which is probably the most photographed and painted site on the North Shore, has taken a major step to preserve the iconic house with its pink color, historic roof line and unique setting.

With the help of historic preservation experts, including Eric Dray, a Cambridge consultant, and Stephanie Niketic, a preservation advisor to STPH, the six-year-old community organization is at work on the lengthy and complex process of procuring a perpetual Preservation Restriction that would protect the integrity of the house.

According to Rochelle Joseph, the STPH president, the first step is to achieve recognition with the Massachusetts Historical Commission (MHC) of the historical significance of the Pink House. That requires submitting a Form B, which is a building inventory used to record historically or culturally significant properties.

Form B outlines in minute detail the architectural features of the house and the property’s history, along with specific photographs. Thanks to funding provided by the Newburyport Preservation Trust, Dray completed the Form B for the Pink House and had it reviewed by the MHC.

Joseph said this is a key step accomplished by STPH in the preservation process. The next step is the creation of a perpetual Preservation Restriction, which must be accepted by the town of Newbury, then approved by MHC.

The U.S. Fish & Wildlife Service (FWS) originally purchased the property on the south side of the Plum Island Turnpike from the Stott Family for possible use as a guest house for visiting staff. But when FWS, whose mission involves marine and land-based wildlife, decided to demolish the house, it was met with strong opposition from the community.

The all-volunteer STPH was formed to save the house on behalf of the community. Bringing together organizations, officials and stakeholders, STPH worked together with FWS to find a solution to restore the house and give it a renewed purpose.

Since the federal government cannot sell The Pink House, the most likely solution is a land swap for equal value, which would allow the Pink House to be restored and maintained under new ownership.

The future use of the property is determined by Newbury’s zoning, which would allow it to be a single-family home again or utilized for an educational purpose.

With a perpetual Preservation Restriction attached to its deed, the Pink House can change owners without worry that the house, built in 1925, will be altered while being maintained.

Joseph said, the Preservation Restriction, which would govern the exterior appearance, not the interior, “would also prevent the house from becoming condos or a mansion, and keep it pink, with the signature silhouette that has grown to be an identifier of this region.”

“There will be a lot of eyes on it to help,” Joseph said.

The house sits on the edge of the Great Marsh, surrounded by mystery and beauty. Its isolation and pink color have fascinated children and adults on route to Plum Island for generations. It has also attracted loving attention from local artists and photographers, who capture it on canvas and film.

In addition to its mystery, beauty and location, The Pink House also has historical architectural significance. It is a Foursquare house, which was a popular style in the South and Midwest, but less so in New England.

Only five Fourquares remain in Newbury and only two of those, particularly the Pink House, have not been significantly altered. The other example of a foursquare is on a side street in Old Town Newbury.

The American foursquare is a two-story house with a rectangular footprint and a front porch that runs along the width of the house. The Pink House’s front porch was closed in by the Stott family in the 1960s for another bedroom.

The American Foursquare generally has little adornment inside or out — a direct reaction to the heavy woodwork of the Victorian era. It was also simple and cheap to build, according to an architectural description.

The Pink House, influenced by the Craftsman style with its deeply projecting eaves, is different from the other Foursquare in Old Town, which is Colonial Revival in style, Dray wrote.

“The Pink House has a feature unique to Foursquares in Newbury – its fenestrated cupola. It has also retained its eponymous pink color since ca. 1955,” Dray wrote.

The Form B clears up some of the mystery surrounding The Pink House. From the description, based on extensive research by STPH board member Sandra Tilton, with assistance from STPH founder and board member Alison Odle, the Pink House was not a “spite house,” as it has been called.

But it was not built for a loving family.

Gertrude Weatherbee Cutler, who lived at 252 High Street in Newburyport, bought the house from the Spencer-Peirce-Little Farm and built it for her son, Henry Cutler and his wife, Ruth. When the Cutlers moved in, the house had only towels and newspapers for curtains, no running water, no neighbors and no stores near it, according to the account.

Henry, who traveled selling shoes, left Ruth and their son, Henry Jr., for a week at a time with only two dollars for groceries. That lasted three weeks, when Ruth moved out and sued her mother-in-law for interfering with her marriage.

A judge ordered Henry to give Ruth 10 dollars a week, but did not grant him a divorce.

Through the years, the house was sold to new owners several times, until the Stott family purchased it in 1960. Decades later, the Stotts put the house on the market and ultimately sold it to the federal government in 2011.

According to one account, William and Julia DeHart, who owned the house in the 1950s, painted it pink. They were from New Mexico, where the color of houses is more commonly influenced by Mexican style.

The full history of the house can be found on STPH’s website. https://www.supportthepinkhouse.com

Read more about the STPH’s efforts to preserve the house at https://www.supportthepinkhouse.com/blog/is-the-pink-house-significant.