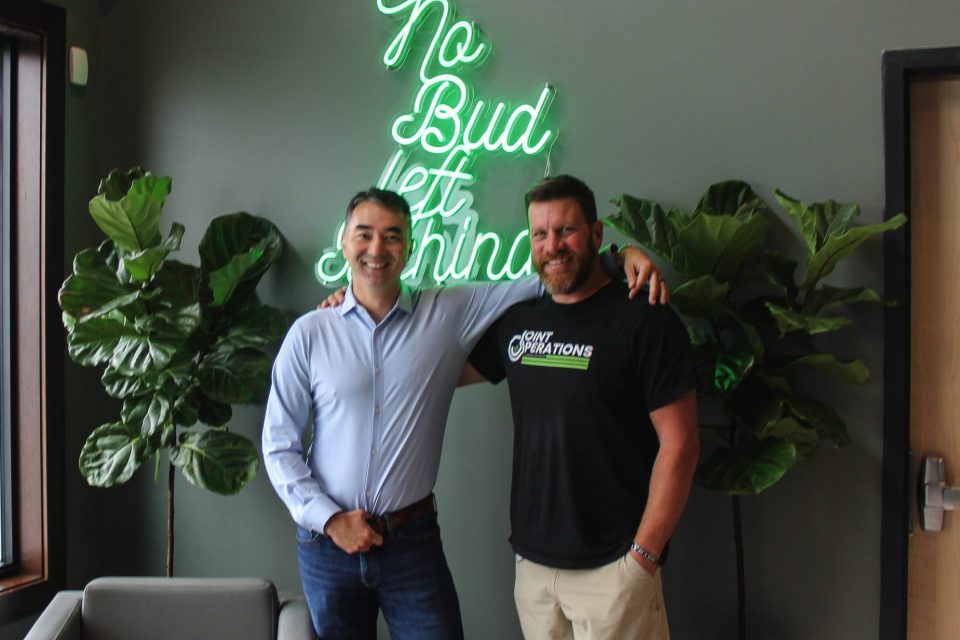 The Joint Operations Rowley Dispensary, which joins two other recreational cannabis shops within a mile of each other, is open to anyone 21 years old and older, but its co-CEOs Michael Scott and Bill Duggan devote special attention – as the shop’s name suggests – to serving veterans.

The shop at 264 Newburyport Turnpike is on the site of the former Allstate Auto Sales. Scott said he chose to locate Joint Operations in Rowley because the town is “cannabis friendly.”

Duggan himself is a veteran, having been a military police officer in Afghanistan. Staff members are veterans, and the shop employed a veteran furniture builder to construct wood and glass display tables in the front room.

“We are committed to giving back to the veterans’ community, who have given me so much over the years,” Duggan said. “We look forward to being an integral part of the vibrant business community in Rowley.”

The shop’s slogan is “No bud left behind.”

“By hiring more veterans, providing them with executive mentorship and giving back a portion of dispensary profits, we want to demonstrate our commitment to ensuring more veterans can play a vital part in the cannabis ecosystem,” Scott said.

Many of the brands of cannabis sold here are produced and marketed by veterans like former Marine, sailor and television talk show host Montel Williams, who has developed a cannabis brand, Inspire, to ease his symptoms from Muscular Dystrophy disease.

Scott, an entrepreneur who owns other Joint Operations on the East Coast, is not worried that the Rowley dispensary is entering a market that could be viewed as saturated with Cape Ann Cannabis just north of its shop at 300 Newburyport Turnpike and Fine Fettle about a mile south at 116 Newburyport Turnpike.

“They (the other shops) do not need to worry,” Scott said. He said the three shops will follow the adage that a rising tide lifts all boats. He believes the three shops in such proximity to one another will create a destination for cannabis customers.

Joint Operations also has a large, refrigerated display case that offers cannabis infused drinks, which Scott believes will be one of the shop’s best sellers.

“We consume caffeine by drinking coffee. We consume alcohol by drinking it,” he said. “I see cannabis drinks as the future of the industry.”

The grand opening, from noon to 6 p.m. on August 20, will feature Williams, who has already had Joint Operations on his podcase, and Kevin Harrington from the investor television show, Shark Tank.

Cannabis influencers on hand will include The Stoner Babe, Puff Puff Pray (The Cannabis Barbie) and Lil Dagga.

Scott and Duggan met while Duggan was serving in Afghanistan. Scott’s company regularly sent supplies to him and his fellow soldiers. Later, they worked together to help homeless veterans in the Boston area.

Duggan and Scott became close friends while training at their favorite recreation — mixed martial arts. When Scott heard Duggan speak about his passion for helping veterans, he invited him to join the business.

For more information on Joint Operations and its Grand Opening, visit www.jointoperations.com.