‘Give These Girls Some Courts’ 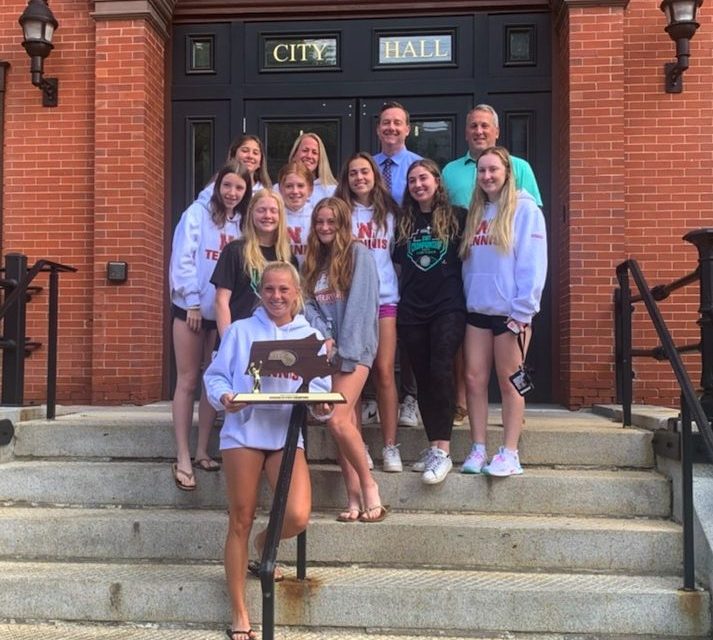 NEWBURYPORT – The Newburyport High School girls’ tennis team won the state championship this spring and may be among the top-ranked teams again next year because several star players, led by Caroline Schulson, are returning.

The only problem. Even though Newburyport is often the top seed in the playoffs and should host its playoff matches, the district does not have enough outdoor courts to qualify. It needs at least four courts in the same site to play the five matches.

That’s like the New England Patriots having the better record for the AFC Title Game, but has too small a stadium, forcing the NFL owners to move the championship against the Tennessee Titans to New York.

Last year, the Massachusetts Interscholastic Athletic Assn. (MIAA) ruled that a school could not host a playoff match unless it has at least four playable courts in one location. The city has only three courts at Atkinson Common.

The new rule appears to have passed because Newburyport’s lack of adequate courts. Teams, which play three singles matches and two doubles matches, were forced to play into the evening when they visited Newburyport.

And the three courts at Atkinson Park are so rutted and cracked that even recreational players prefer to play elsewhere to avoid point-ending bounces when the ball hits a rut or a crack.

Asked about the Atkinson courts, one player summed up the comments of others, saying, “They’re horrible.”

Mark DeKanter, an avid player, who raised the funds several years ago to repave the Atkinson courts, is planning a new campaign to repave the courts. Watch for details.

This spring, while Newburyport was on its way to the state championship, the girls’ team used Pentucket High School courts for its matches. But those courts are now closed because construction crews for the new Pentucket Middle School have taken them over.

Two new courts are being built on the Nock Middle School campus, thanks to the Community Preservation Commission (CPC) and the persistence of Rosemary Turgin and Greg Lynch, who worked for two years with city grant writer Nancy London to secure the funding to repave the courts.

The courts, which are being rotated 90 degrees to make them regulation length, are being rebuilt under the supervision of the school district’s facilities department.

Turgin and Lynch persuaded the CPC, a city agency that dispenses funds collected from taxpayers, to grant $170,000 to rebuild the Middle School courts. When the bids for the work came in $40,000 higher than expected, the CPC approved additional funding.

Lynch, who co-coaches the girls’ team with Jana Schulson, said the two additional courts are great, but they won’t solve the problem of having four courts at one site so Newburyport High School can host a match.

There have been discussions about building three additional courts on the Middle School campus. Discussions about adding more courts at the popular Atkinson Common have not been well received.

“Give these girls some courts,” said Lynch, whose daughter is on the team.

Two sites at the Middle School are under consideration, Lynch said.

An additional three courts could be built where a small softball field stands now. It is used primarily as a practice area for lacrosse.

The other site could be on the west side of the campus at the corner of Toppans Lane, where there are basketball courts.

Both sites are large enough for three courts, plus some stands for spectators. That would allow the tennis teams to host matches, played at the same time.

Ironically, Newburyport has some of the best indoor tennis courts in New England. The privately owned Newburyport Tennis Club on Low Street has six well-maintained courts that can be rented.

The teams use the indoor courts on rainy or snowy days, but those courts have not been used for playoff matches because the popular indoor courts are packed in the afternoons by youth tennis clinics, said Kelly Ouellet, director of the club’s tennis program.

Schulson, daughter of Jana Schulson, is the No. 1-ranked player in Massachusetts and the No. 4-ranked player in New England. This spring, Caroline Schulson went undefeated, 21 wins to zero loses. She did not lose a game until the team’s seventh match of the season against Ipswich, a match she won, 6-0, 6-1. In the state championship, she won her match against Austin Prep. 6-0, 6-2.

The team lost Katherine O’Conner to graduation, but will have a strong line up that includes Ana Lynch, daughter of Greg Lynch, who played the second singles position; Delaney Woekel, Sydney Gediman, Carly McDermott and Harper Bradshaw.