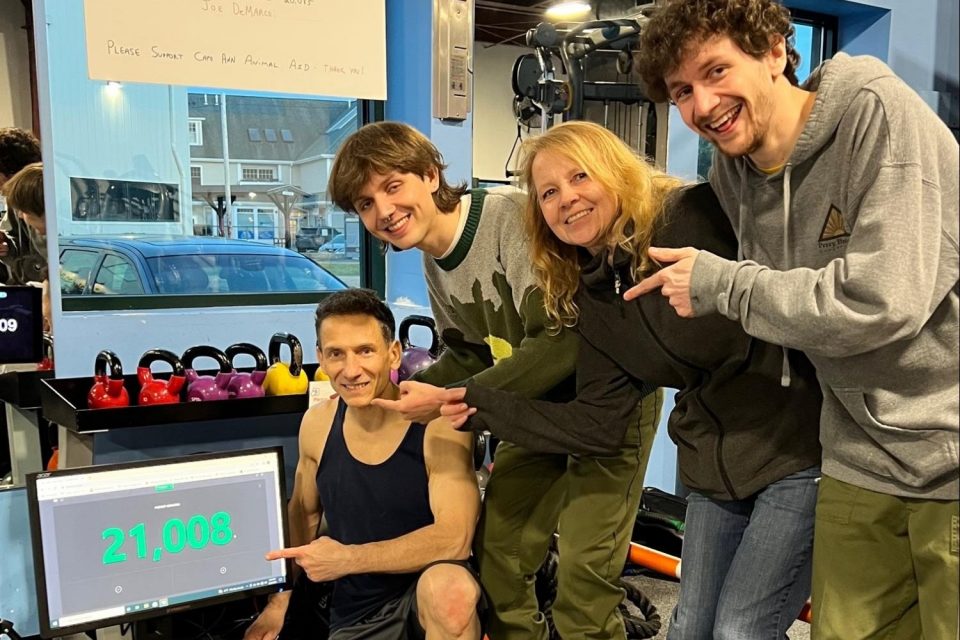 IPSWICH —Most people hitting their 40th high school reunion would be rightly pleased if they laced up the running shoes to compete in a 5K, or did an extra couple of laps at the pool.

But Ipswich resident Dr. Joe DeMarco, a former Revere resident and Class of ‘82 grad, sets a much higher bar, recently breaking the world’s record for most push ups in 12 hours.

“It was a long day, but I did go to work the next day,” said DeMarco, who has a chiropractic business in Manchester-by-the-Sea.

The numbers are pretty mind boggling for anyone who fondly remembers trying to pump out 50 pushups for the President’s Physical Fitness Challenge all those years ago.

On May 25 at MAC Fitness in Gloucester, DeMarco completed 21,008 push ups in 12 hours, beating the old record by just under 100. Along the way, DeMarco also happened to break the record for most push ups in eight hours, completing 15,261 over what would be a normal person’s work day.

Dr. Joe DeMarco in the midst of effort to break 12-hour push up world record.

The world record challenge was a fundraiser for the Cape Ann Animal League, a cause DeMarco said is close to his heart as his pet dog goes through cancer treatments.

“I wanted to do something to raise money for the Cape Ann Animal League and I wanted to try something different,” said DeMarco. “When I first went to them with the idea, I’m not sure they knew what to make of it. But it all worked out and they said it was the best fundraiser they ever had.”

He was an accomplished gymnast at Revere High School and UMass-Amherst and went on to win several major bodybuilding tournaments, including a national championship in 2007 in the over 40 category.

“I retired from bodybuilding after 20 years in 2009, but I’ve always worked, and I’m always looking for new goals,” said DeMarco.

When not training to break a world record, DeMarco said he typically does cardio and weight training for an hour and a half to two hours every day.

But as he trained for nearly nine months to break the push up record, some of those workouts lasted for six or seven hours a day.

“I felt like this would be a good accomplishment and a tough record to break,” DeMarco said. “I’m going to be 58, so a lot of people didn’t think it was possible.”

When DeMarco began his training, the 12-hour push up record had stood for 33 years. While he was training, he found out that someone from

Australia had broken the record, but that only inspired him to work harder and take the record for himself in May.

For those looking for the fountain of youth, or at least the fountain of staying in better shape, DeMarco said the key is to take care of your body through exercise and diet. In addition to his exercise regimen, DeMarco eats a 100 percent plant-based diet and doesn’t drink or smoke.

“I’ve never not eaten healthy and that has a big effect,” said DeMarco. “All those things take a toll on your body and they are best avoided.”

For those looking for a little more detail on exercise, diet, and general healthy living, DeMarco has a YouTube channel, Okramed Health, with over 300 videos.

“We’re trying to get people to take care of themselves,” he said.

Now that the push up record is in the books, pending final verification, DeMarco said he’s already looking forward to the next challenge.

“When I was done (with the push up record), it was almost anticlimactic; the journey is the awesome part,” said DeMarco. “The next day I started plotting out what I was going to do next.”

The next thing just might be trying to break the record for most chin ups in 24 hours, DeMarco added.