Stalemate in Battle For March’s Hill 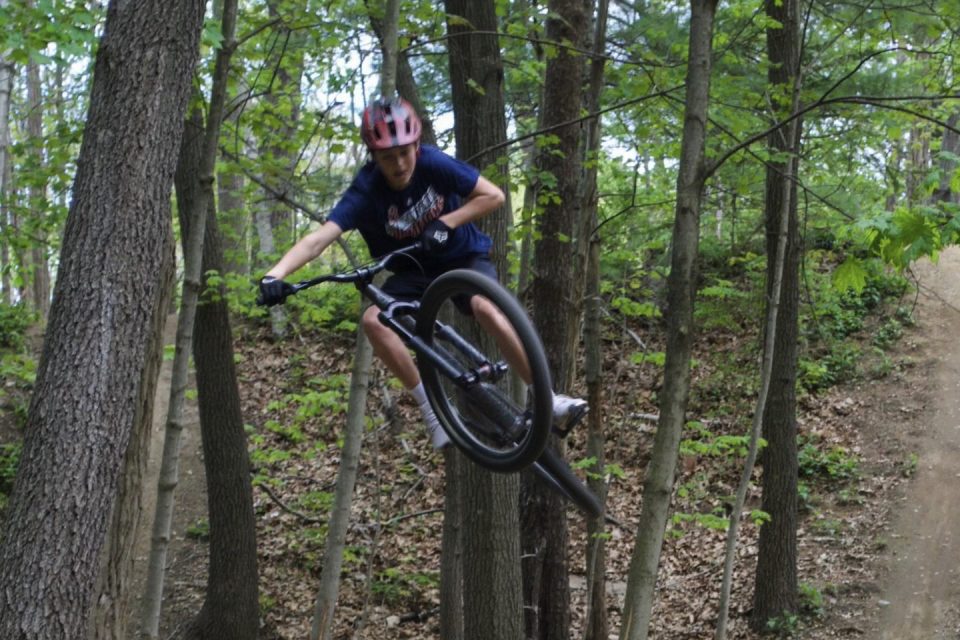 Photo Courtesy Newburyport City Hall. A biker using one of the jumps at March's Hill Park.

NEWBURYPORT — The tense war between neighbors of the 17-acre March’s Hill and mountain bikers who have built trails and jumps in a wooded section was fought to a stalemate last week before the city’s Parks Commission.

The commission, after listening to more than an hour of arguments from the bikers, their parents and the neighbors, postponed approval of a proposed pump track that would be built at the base of the water tower. Commissioners promised to keep looking for a solution to the already existing mountain bike system of track and jumps in the woods nearby.

The tracks and jumps were built and used by the bikers themselves with little supervision and questionable approval from the Parks Commission.

The Parks Department, headed by director Lise Reid, was sharply criticized for its lack of supervision over the bikers’ construction of the tracks and jumps.

“This is not about what the kids have done wrong. It is about what the city has not done,” said a neighbor Steve Mullen, who complained that the bikers’ activities “are totally out of control.”

Parks Commissioner Paul Swindlehurst said, “I think we could have done a better job.”

Reid said it was the commission, not the parks department, that approved the bikers’-built trails and jumps in 2020.

The proposed pump track, a series of hills and turns that allow bikers to propel their bikes forward with minimal effort, would not replace the trails and jumps in the woods.

Chabot was praised by commissioners for designing the pump track, but Swindlehurst called it “the right idea, the wrong place.”

In a note, disagreeing with Swindlehurst, Chabot said March’s Hill is the right place. Other places, including Lower Atkinson Park and the woods near the city dump have been rejected in the past.

Tension between the neighbors and the bikers and their parents boiled over at times during the meeting.

Caleb Barlow, a parent, accused the neighbors of abusing the bikers, including placing threatening notes on the trails and swearing at them. He said he has coached the teenagers how to deal with “inappropriate behavior” by adults.

Paula Katkin, a neighbor, complained that the bikers have made “a large swath of March’s Hill unusable” for any activities except mountain biking.

The bikers, mostly middle and high school boys, were adamant that the city allow them to keep building and riding on the trails. Seb Petersen, one of the bikers, wrote in a note to all of the participants, “I can tell you one thing. You’re not bringing us down.”

In another note, Petersen accused the neighbors of cutting down trees so they could blame it on the bikers. “Too much hate towards us,” he wrote.

Commission president Ted Boretti said he saw no way to stop the bikers from riding. “The more we say no, the more they want to do it,” he said.

Boretti and Swindlehurst, agreed with neighbor Steve Mullen, that the amateur-built jumps were very high and could potentially cause injury to the bikers. “One is super high,” Swindlehurst said. Boretti proposed that the city take a more active role in assessing the safety of the jumps and trails.

In another note during the Zoom meeting, biker Petersen wrote, “Danger is an important part of mountain biking at the level that I and others do it. Damage is always apparent. It is part of the sport. We take care with building the jumps because we care about our safety.”

Reid, following a meeting last week with Mayor Sean Reardon on biking at March’s Hill, said the city solicitor has been asked for an opinion on the liability for accidents in the park.

Reading from a memo based on that meeting, Reid also committed to replanting vegetation that had been removed, providing more supervision of the bikers’ activities and adding more signage that establishes rules regarding the biking.

Previous signs placed in the park by the city were torn down. The signs cited city ordinances forbidding the destruction of park property.

Several of the bikers said building the trails and jumps has created a community among the young riders. Merrick Barlow and other bikers said March’s Hill has become a great place to make friends. Parents said it was better for their sons to be riding rather than being in front of a computer screen.

A female student said she likes the idea of the pump track, which is less dangerous and would attract girls to bike there. She called mountain biking in the woods “a male dominated sport.”

Rachel Mullen, a neighbor, urged the city to conduct a feasibility study on where the best place would be to build the pump track.

Councilor Jennie Donahue, who represents the district that includes March’s Hill, said most people agree March’s Hill is the right place for the pump track. Donahue said feasibility studies are too expensive and doubted the city council would commission such a study.

Rachel Mullen also urged the city to request an opinion of the Public Safety Commission, which includes the fire chief and city marshal, about the impact of the proposed pump track on Coffin Court, the only vehicular access to the water tower. The narrow residential street has no turn-around.

Donahue said she would propose that only residents be allowed to park on Coffin Court. It was unclear if Chabot’s proposal included parking for the pump track.