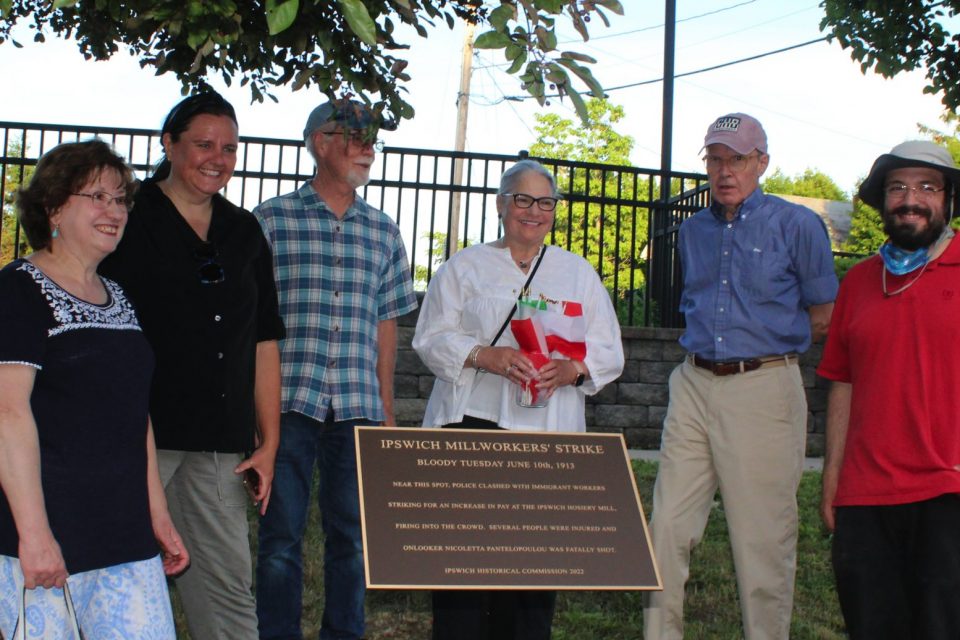 IPSWICH – Last week dozens of people, including descendants of Nicholetta Paudelopoulou, gathered at the corner of Main and Saltonstall streets to unveil a new plaque honoring the 27-year-old mill worker and other bystanders whom police shot 109 years ago to break up a protest here for higher wages and better working conditions.

Initiated and funded by the town’s Historical Commission, the plaque on property owned by EBSCO across the street from the Institution for Savings reminds passersby that Ipswich was the scene of what has become known as “Blood Tuesday, June 10, 1913.”

The bronze plaque reads: Near this spot, police clashed with immigrant workers striking for an increase in pay at the Ipswich Hosiery Mill, firing into the crowd. Several people were injured and onlooker Nicholetta Paudelopoulou was fatally shot.

The ceremony began and ended at the Assumption of the Virgin Mary Greek Orthodox Church. Participants, carrying Greek flags and a workers’ banner, paraded on sidewalks downtown to the site of the plaque on EBSCO property.

Christine Sarantopoulous, Nicholetta’s great grandniece, who helped organize the event, told the crowd her great grand aunt would have been honored for the town to remember her in this way. She is buried in what was called the immigrants’ cemetery, now part of the Highland Annex Cemetery on Fowler Lane.

Paudelopoulou was walking home from her shift at the Brown’s Essex mill in downtown Ipswich. Her great grandnephew, Michael Sarantopoulous, told the crowd that Nicholetta was happy that day. “She was on her way home to celebrate her engagement to be married,” he said.

At Estes Street, she encountered a crowd of mostly Greek and Polish workers striking for a 20 percent wage hike. She stopped to watch the protest, but the primary breadwinner for her mother and younger sister did not join in the protest.

At the time, workers were paid by the piece, and salaries ranged from $2.50 to $6.50 a week. The International Workers of the World (IWW) had called the strike, demanding the pay increase. The mill owners refused.

The owners, supported by the local newspaper publisher and town officials, called out the Ipswich police and officers from other towns to quell the protests. Shortly before 6 p.m., when the crowd did not disperse, the police were ordered to shoot into the crowd. They fired 50 to 100 bullets in five minutes, injuring several protestors and bystanders.

Nicholetta, standing on a porch nearby, was struck in the head and died.

George Kalvas, who held a brick, was shot in the leg. Panagiova Paganus was shot through the cheek because she brandished a club. Archas Parskavas was shot above the knee.

Three other bystanders were also shot. Flora Cornelius, a 36-year-old housewife, was shot above the knee. Satffis Jorokopoulos, an 18-year-old fruit vendor, manning his stand, was shot through the ankle.

Nicholetta’ death was a huge financial and emotional loss to her family. Her fiancé returned to Greece, joined the army and died in World War I.

EBSCO employee Issac Ross became intrigued with the strike and Nicholetta’s death when he learned about it at an Essex Heritage seminar. “I never heard about it in school,” he told the historical commission last year.

“A lot of people have never heard about it,” said Linda Grimes, vice chair of the historical commission. “It has been swept under the rug.” The attack on mostly immigrant workers was “a terrible incident,” she said.

Rachel Meyer, a commission member, said, “It is an uncomfortable subject.”

The town’s historical commission voted unanimously to honor Paudelopoulou and others who were injured with the plaque on the anniversary of the strike. The commission voted to allocate up to $2,100 to buy a 20- by 14-inch bronze plaque. The plaque cost about $1,120 plus shipping.

Ipswich was not a hotbed of radical labor protest in the 20th century. It was a company town. The establishment, led by George Scofield, the publisher of the Ipswich Chronicle and a local politician, opposed the strike and sided with the mill owners, who recruited scab workers on the Boston docks.

Town Selectman Charles Hull read the strikers a “riot act,” ordering them to disburse. Most of the workers, who spoke only Greek, probably did not understand his orders.

Following the violent incident, no police officer was charged. Instead, local town officials and business leaders, including the Ipswich Chronicle, put out false information that disparaged immigrants and the striking workers.

Initially, the police said they were fired on from tenement houses near the factory. Selectman Hull claimed that six shots were fired at police, although at the trial no evidence was produced that the strikers had guns.

The police claimed Paudelopoulou was killed by a bullet fired from the second floor of a nearby tenement. But the local medical examiner ruled that was impossible. From the angle of the bullet that entered her head, she appeared to have been shot by someone standing directly in front of her.

A dozen strikers were arrested and put on trial, but when the evidence against them was insufficient to support the charges, the case against them collapsed.

“History tends to repeat itself – a lot,” said town historian Gordon Harris last year before he spoke about the Ipswich Hosiery Strike at the Essex Heritage symposium. The parallels between 1913 and current events are unmistakable, he said.