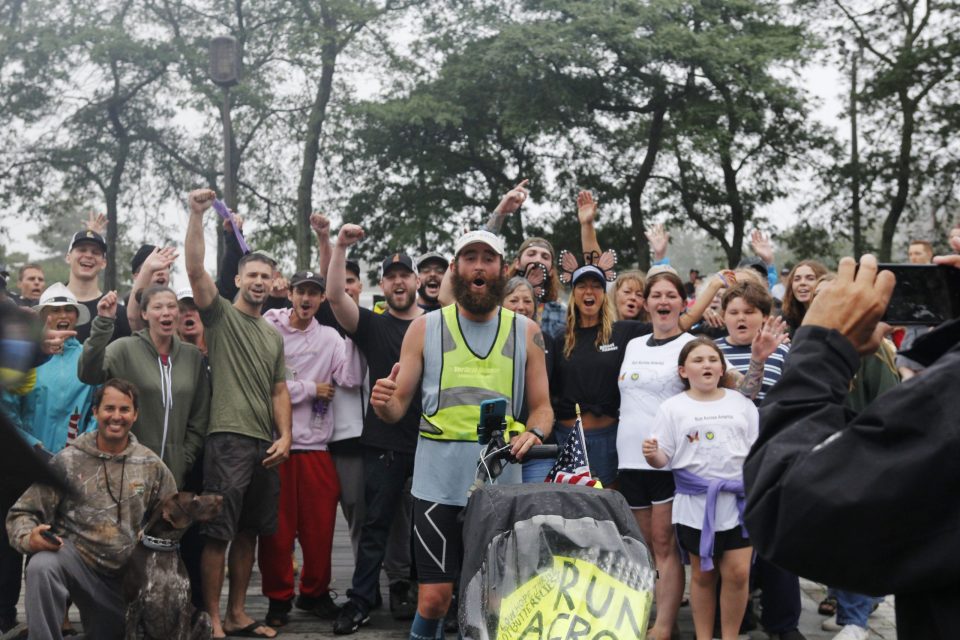 NEWBURYPORT – After running alone for more than 3,000 miles from the west coast, braving extreme weather, packs of dogs and numerous flat tires on his running stroller, Mike Wilson is planning to make the great American crossing on foot again next year.

Wilson plans to leave on March 1, after dipping his toe in the Pacific Ocean, and finishing with a plunge in the Atlantic Ocean on Plum Island months later. He ran on average about 40 miles per day.

He said he also believes, “I can do it better.”

Other runners have made the crossing more than once, he said. “It’s hard to explain, but many people do it again.”

Last year, he left from the Santa Monica Pier in Los Angeles, CA, on May 1, detoured to Bend, OR, when he discovered that running alone across the Mohave Desert was not a good idea, and ran the northern route through the Grand Tetons. He was greeted at 5:20 p.m. on Sunday, Aug. 22 on the Merrimack River waterfront in Newburyport.

Wilson admitted he was “miserable at times” during the months-long run. He did it solo without anyone to talk to in person at night or a support vehicle to carry the food, water and extra running shoes. Last year, he ran pushing a stroller with his gear and food. He worried often that he would not make it to a place where he could buy food or pick up mail that included new pairs of his favorite Hoka running shoes.

Next year, he plans to have a support car to follow him. To stay fit in coming months, he will work as a tour guide for mountain hikers. He also plans to make some timed runs. His first is the 230-mile Bay Circuit Trail, from Duxbury’s harbor to Plum Island.

The current best time is four days when a runner made the trek at a rate of 57 miles per day. Wilson thinks he can beat that time.

The first Run Across America raised more than $22,000 for Lucy’s Bus in Amesbury, which provided therapy for 22 children who had cancer. This year, he wants to raise money and awareness of mental illness. He has not selected an organization to benefit from funds donated.

Beecher Grogan, executive director of Lucy’s Love Bus, said of Mike, “This guy went through four months of hell for our kids. He sacrificed for the kids every day. He got up and kept going when he did not want to. The children knew he was suffering for them. And they knew he was suffering just like they do.”

In turn, the Love Bus children were an inspiration to Mike. Knowing he was tired and lonely running by himself, the children sang to him on Instagram. They sang the song, I’m Still Standing to keep up his spirits, Grogan said.

Mike learned about Lucy’s Love Bus more than 12 years ago when his best friend’s mother was dying of cancer. He volunteered to run the Appalachian Trail twice to raise money.

Grogan said she felt personally responsible for Mike every day as he ran across the country. “I’m so grateful he is home safe,” she said.

The trip seemed destined to failure from the start. The car carrying his gear burned up on a Los Angeles freeway, delaying his start. About 1,000 miles into the run, he felt he could not make it. But he got up and started running again the next morning, overcoming injuries and worn-out shoes.

At the finish line on the Merrimack River boardwalk, about 150 fans, including his best friend, John Cody, welcomed him home. They greeted him with cheers, “Mike, you did it,” plus champagne and a Heineken.

Mike broke into tears, pulling the brim of his hat over his face to hide his emotions.