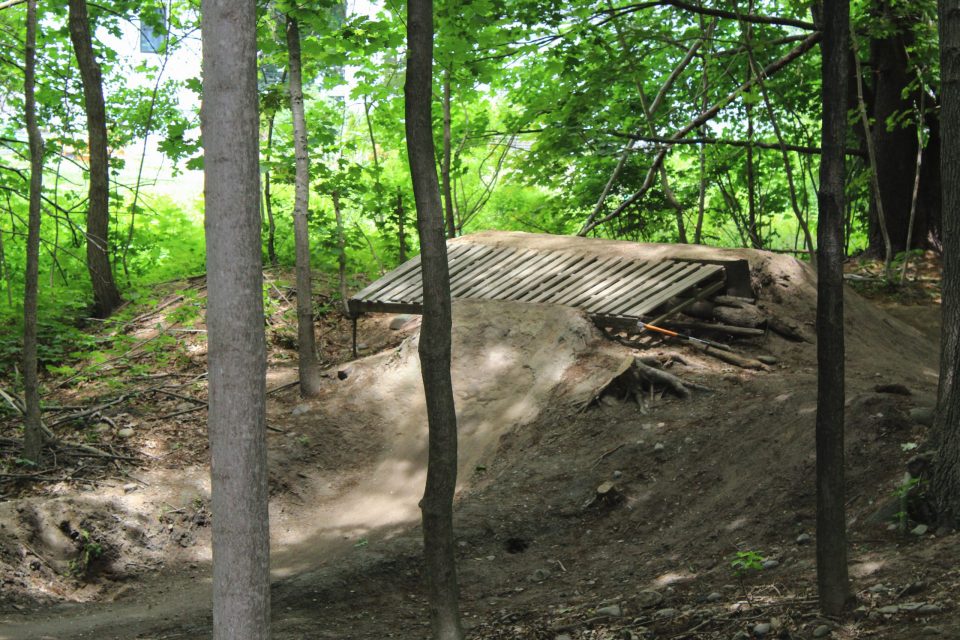 NEWBURYPORT — The 17-acre March’s Hill, one of the highest points in the city, was used during the War of 1812 to watch for British ships on the Merrimack River.

Today, neighbors of March’s Hill still have an eye out. But instead of British warships, they are keeping tabs on middle school and younger dirt bike riders who are building their own jump track in the woods, construction jumps, widening paths into trails and digging holes for dirt to make the jumps, some of which are very tall.

Last month, the Parks Commission voted to approve the trails and jumps, but ordered the bikers not to create new trails, jumps or holes without its approval. The Parks Department also hung signs in the park that banned cutting, removing or harming trees or other plants. “Please use your parks with care,”

The signs have been torn down.

A short walk through the wooded area shows the construction and demolition by the bikers has continued. Last week, after the rains left puddles on their trails, four Nock Middle Schoolers were using a shovel to dig new dirt for fill. An axe lay next to the tallest jump. And a wheelbarrow stood nearby.

In an email to the neighbors, Parks Director Lise Reid wrote: “We are in the process of assessing the site to determine what activity may have occurred at March’s Hill that may violate the Commission’s ruling before we take any steps to revoke any privileges granted.”

March’s Hill has long been one of this city’s jewels. Donated by Audubon member Clara De Windt as a playground, the land, which became a designated park in 1954, is a rare, wooded area in a city where open land is becoming scarce.

In winter, the park off High Street is a popular place for sledding. Because of its tranquil beauty, the city designed the extension of the Clipper City Rail Trail to pass along its eastern edge. Paths from the rail trail that extended into the hilly, treed areas have long been popular for human or dog walking.

Starting a couple of years ago, the dirt/mountain bike riders discovered that the hills in the March’s Hill woods made for a great rough-hewn pump track.

According to residents near the park, the bikers began cutting new, wider paths through the city-owned woods that lead down steep embankments to a series of ever taller jumps, built by the bikers. They use shovels, axes and picks to turn the paths into trails. The jumps they built are of fallen trees, a discarded wooden pallet and dirt dug from holes in the ground.

Regular users of the park complain that they no longer walk the paths because of the hazards and presence of the bikers. “Those trails are effectively unusable to anyone other than extreme BMX cyclists in any practical sense,” more than a dozen neighbors wrote to At-Large Councilor Connie Preston.

“There are children in this very neighborhood who don’t dare to go in (the woods) due to the hazards and general attitudes and behavior of many of the current users of the ‘trails’,” the neighbors wrote to Preston.

One neighbor said that as a biker passed her racing down a hill, he jumped his bike over her dog.

In their letter to Preston, the neighbors said they worry about injuries to the bikers. One teenager reportedly had 16 stitches in his leg from a fall. Another may have had a concussion.

They further complained that the parks department is not supervising the youngsters’ use of the tools. Several neighbors said the bikers are blasting music late into the evening. And when one neighbor asked the bikers to stop building the jumps, the bikers threw rocks at their roof solar panels, he said.

Defenders of the bike riders have been equally outraged at the neighbors for objecting to their children’s activities.

“Let them be noisy, let them be messy. Because even though it can be messy and noisy, this is the beauty of childhood,” wrote Kelly Garbino. “Play is the best way to keep a child away from the poor choices that can hurt a whole community. You know what is even sadder, scarier, more maddening than a busy, noisy town park: A child who is not at the park, isolated, in front of a screen at home, their mental health and connection to community fading away.”

Alicia Tague, a parent, called the construction work for the bikers a healthy activity. She wrote: “This makers space has been an incredibly healthy outlet for kids to plan, build, and experience downhill mountain biking. They are breaking no noise ordinances and have the right to use a public park for their own personal enjoyment.

“The noises you are hearing are ones of celebration, when a beginner biker tackles his first jump, of self-fulfillment when they successfully perform a trick they have wanted to try, of camaraderie for the experiences they are all sharing together.”

The middle school-aged students encountered last week by the Town Common stopped work to complain that the neighbors had stolen $140 of their shovels.

The issue is likely to come to a boil at the next Parks Commission meeting at 7 p.m. on Thursday, June 16, when the commission plans to hear a proposal for a dirt pump track to be built on a piece of flat land near the water tower. The land is owned by the Parks Department and the Water Department.

The proposed track would be circular with dirt bumps and would not require the high starting ramps the bikers have cleared for the existing trail, according to a neighbor Paul Recinos, who met with Jaime Chabot, whose 14-year-old son will present the proposal for the track to the Parks Commission this week.

Recinos said the proposed pump track would be an addition, not a replacement for the jumps and trails in the woods nearby.

One neighbor said Reid told him that when the new pump track is built, the city will not remove the amateur-built jumps in the woods.

Reid told a neighbor by text last week that the commission would hear comments about the jumps and new trails, built by the bikers, but would take no action. It would focus at this meeting on the pump track proposal.

There have been other attempts to create a pump track in the city, including one to be built at Atkinson Park. Neighborhood objections then, similar to the current opposition to building four pickleball courts in the park, doomed that proposal.