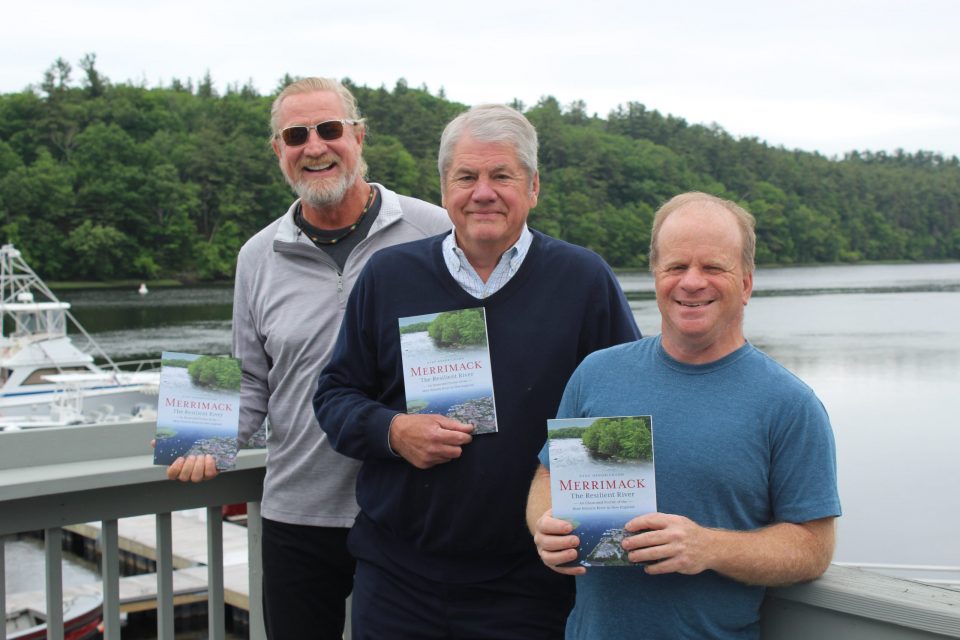 THE MERRIMACK RIVER – As a boy in Merrimacport, Dan Healey fished and played with his friends in what he described last week as “a very smelly” Merrimack River. The water smelled; the fish he and his friends caught smelled, he said.

“When my mother would throw me out of the house, the river was where I played,” the Amesbury businessman, philanthropist and boater said last week.

In the last 25 years, while Healey ran a family-owned, high-tech defense manufacturing company, the river has become a lot cleaner, thanks to government and volunteer efforts.

“There is a long way to go,” Healey said.

The thing that is driving him these days is, “I want my children and local citizens to appreciate the river,” he said.

Healey, who sold ARC Technologies, a microwave absorber and advanced materials company, three years ago to Hexcel Corp., is now stepping up his efforts to raise awareness of the river as a resource and a challenge.

Working with local author Dyke Hendrickson, Healey has created the Dan Healey River Education Program to raise awareness about the health and history of the 117-mile-long waterway.

He purchased several hundred copies of Hendrickson’s book, Merrimack: The Resilient River, and is having them distributed free to local schools, civic groups and volunteer organizations like the Merrimack River Watershed Council, which plans to hand out the book at events.

“Books like this raise awareness,” Healey said. “Awareness is part of the big picture.”

He said he wants to use the book to increase political pressure on municipal, state and federal agencies to do more to clean up the river.

Healey, who owns several boats, including a seaworthy yacht, has a new reason for wanting to help clean up the river. He purchased Larry’s Marina in Amesbury that for decades was owned by Lawrence Kelcourse, father of state Rep. James Kelcourse.

Healey plans to rebuild the venerable marina into “a top of the line” facility that includes a 130-seat restaurant and 30-seat bar, a function room and a members-only club. He has secured a Chapter 91 permit from the state Department of Environmental Protection and permits from the Army Corps of Engineers. He has already replaced the wooden docks and is working with the city for permits to begin other construction.

The new marina, restaurant and club will be ready, he predicted, by the summer of 2024.

“The river is a beloved asset, but it faces environmental challenges,” said Hendrickson, who will administer the program. “The book explains reasons for pollution (in the river) and what steps can be made to improve the water quality.”

John Macone, policy and education specialist for the Watershed Council, said that last year, 822 million gallons of untreated waste were discharged into the Merrimack by Combined Sewage Overflows (CSOs).

CSOs are when storm water runoff is not separated from pipes that bring home and business sewage to treatment plants. In a storm, the excess water floods the sewage treatment plants, forcing the plants to dump the water and sewage into the river.

After storms, the river can be five times more toxic than is safe for humans and animals to swim in it, Macone said.

Some cities like Newburyport and Amesbury have separated their storm water pipes from the sewage treatment facilities. Other cities like Haverhill, Lawrence, Lowell and Manchester, N.H., still have integrated systems.

Healey said CSOs are currently beyond the control of residents. “It’s a Catch 22 situation. We want more people to move to the Merrimack Valley and they are, but as the region grows, it creates more sewage that can end up in the river.”

Macone, whose organization has about 1,000 members in Massachusetts and New Hampshire, said, “We want people to learn more about the river so they can work for improvement. This book will be given out at our events, like kayaking trips or hikes near the river. We want people to know more.”

Starting this summer, a notification system will be implemented to alert users of the river that there has been a discharge from sewage plants into the river. The alerts will appear on web sites, in social media and by direct communication from the sewage treatment plants, Macone said.

But Macone does not believe that system will be sufficient to keep water users safe. What is needed is a buoy system that measures pollution in the river in real time and relays the information wirelessly to web sites, he said.

The Watershed Council is seeking funding for the buoys, which cost about $30,000 each. Macone estimates about 10 buoys will be needed to monitor the water quality of the river.

Healey said he got excited about Hendrickson’s book because it “explains the Merrimack’s history and its current challenges. It could help readers, especially young people, appreciate its value.”

In addition to the Watershed Council, organizations that have expressed an interest in working with the book give-away program include Storm Surge, an organization concerned about rising sea levels, and the Merrohawke Nature School.

If interested in receiving free copies of the book or buying copies of it, contact Hendrickson at dykecarterhendrickson4@gmail.com.