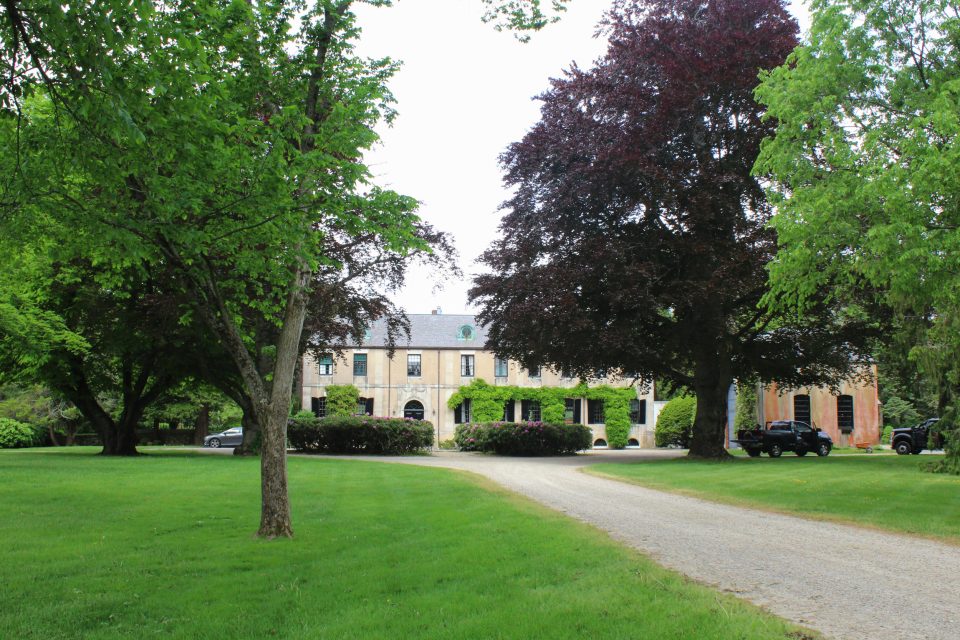 Stewart Lytle / The Town Common. The Mansion at 55 Waldingfield Road

IPSWICH — The Waldingfield estate has undergone major changes since it was first built along the Ipswich River in 1638. Historic Ipswich notes that every hundred years the property has been transformed with relocation, expansion and a devasting fire in the 1920s.

In 2022, change appears to be coming again to the stately mansion, rebuilt in 1929 after the fire. It stands near the Hamilton town line on lush grounds where horses roam in open fields beside Greenbelt’s Julia Bird Reservation.

Ora, Inc., a global medical research company that develops products to combat blindness, has proposed to convert the 40-acre estate at 55 Waldingfield Road into a corporate campus.

The application before the town’s Planning Board is made under the town’s great estate protection bylaw. The company would preserve open space, keep the great house and make large additions to existing buildings near the street under phase one of its plans.

According to a letter from “The People of Ora,” plans are to renovate and restore the existing home, barn and a caretaker’s cottage “with minimal change to the design and a focus on improving building sustainability and energy efficiency.” Ora would also add a guest house for visitors.

The tree-lined driveway with its two cement-dressed fieldstone columns would be removed. A larger entry from Waldingfield Road would be created to allow for the anticipated delivery trucks and car traffic. The gravel driveway would be replaced with a machine-cut stones, pre-cast cement finials and cobblestones.

“The design and improvements will be done with great care and sensitivity to the character of the existing property, and consideration of sightlines,” the People of Ora wrote.

The proposed use has stirred intense opposition from Ipswich residents who believe it will increase traffic, particularly on the scenic Waldingfield Road.

“Waldingfield Road is designated a scenic road and should not be home to a corporate campus,” Amanda Markos of Ipswich wrote in one of dozens of letters from residents opposing the approval of Ora’s plans. “It simply cannot handle the traffic without permanently damaging the integrity of the road, as well as the enjoyment and safety of nearby neighbors and other members of the community.”

“The property itself is one of the most historically significant properties in our town,” Markos continued. “It has existed for generations in its current state and is part of what makes the area unique in its landscape and character.”

In testimony before the Planning Board, Ora’s president and chairman Stuart Abelson said the company needs a place like Waldingfield for its 200 employees in the Boston area to gather two or three days a week.

Ora at Waldingfield will not be a corporate headquarters, he said. It will have a mix of offices, meeting spaces and guest rooms for visiting employees. Outside, it will have horse barns.

“There’s no such thing as a headquarters anymore in a modern, forward-thinking company,” said Abelson, who grew up in Andover and lives in Gloucester.

Ora has operations in China, Japan, Europe and Australia and will soon open offices in South America.

“The concentration of leadership in one place is totally changing now,” he said. What Abelson said Waldingfield will be has got to be “magical. It’s got to inspire. You’ve got to want to go there. It’s got to be a destination.”

He added, “Instead of walks around the parking lot, hanging around the water cooler and drinking crappy coffee to bond, why not go down and throw a line in the Ipswich River? Saddle up a couple of horses?”

In their letter the People of Ora said the company’s organizational design is now ‘remote first’ with our employees working mostly from home.

“Instead of creating an office that is designed around cubicles, we want to offer our employees a place that inspires them to think differently, move freely and to connect with each other through nature, shared experiences, and creativity,” the letter stated.

One issue before the Planning Board is how much land at Waldingfield will be conserved. The town bylaw requires that a Great Estate preserve at least 40 percent of its open space.

John Hardin, an architect for Ora’s plans, said 65 percent of the Waldingfield land will be conserved. Comparatively, two other great estates in Ipswich have similar amounts of land conserved. Seventy percent at Turner Hill and 55 percent at New England Biolabs are protected.

The town’s open space committee has recommended that 77 percent of Ora’s land be conserved. That would leave the company with around 9 acres to work with, Hardin said.

Bryan Townsend, an Ipswich resident, asked in his letter, “At this late stage in the deliberative process, it’s unclear how these challenges, among others, can — or will — be addressed to the satisfaction of the planning board as it looks to vote on this special permit application.”