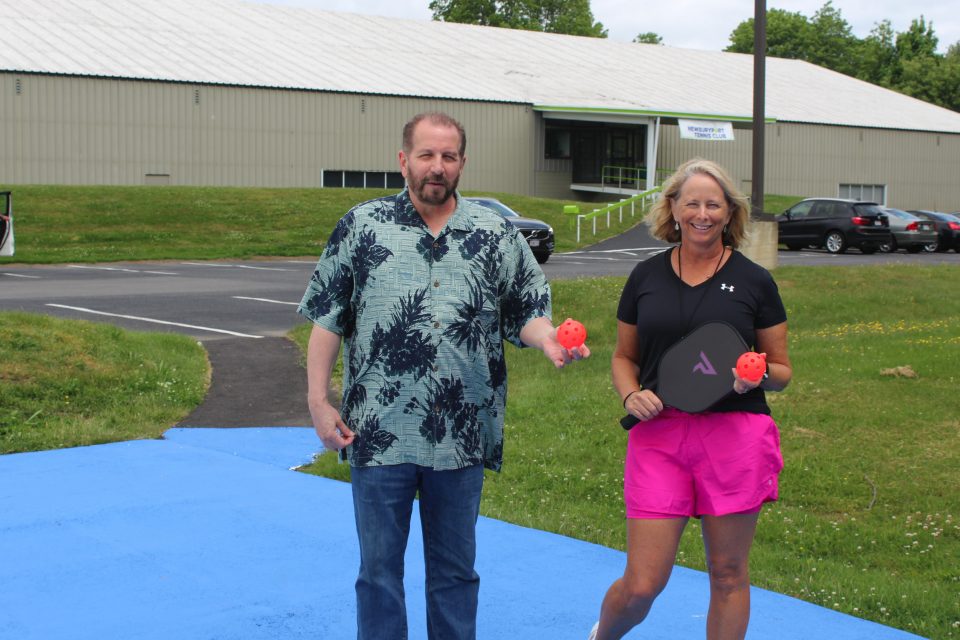 NEWBURYPORT – Pickleball is back at the Newburyport Tennis Club this weekend.

The NTC, which has housed indoor tennis for more than 40 years, has repaved and painted an underutilized parking lot, large enough for three pickleball courts. Play is expected to begin Saturday.

“It was popular,” said pickleball coordinator Deb Binder. “I could not schedule enough courts this winter.”

The club at 178 Low St. paid for upgrading the parking lot. Perrota said the courts will have picnic tables for spectators and players waiting their turn, plus flowerpots and a screen to keep the balls from rolling into the wooded area behind the courts.

The club is scheduling clinics with certified coaches to teach players the skills and how to understand pickleball’s scoring system. There will also be practice times and Tuesday night league play.

Binder said she has a list of more than 500 players that have signed up to play the game in the last 12 months. There were 200 players on her list for play last winter.

“We are beyond excited to add pickleball to Newburyport Tennis Club’s sports roster,” the NTC wrote on its web site. “Our three new outdoor courts opened in 2021 and are open from June through October. Indoor pickleball is available on weekend evenings from November through April.”

The NTC courts may reduce the pressure from pickleballers on the city parks department and on the city council to build four new pickleball courts near the baseball/softball fields at Lower Atkinson Common.

Pickleball is already played on the tennis court at Cashman Park on the Merrimack River and at the Bresnahan School. Pickleball was banned at Perkins Playground after a few weeks when the South End neighbors complained about the increased noise and parking.

Using a $40,000 grant from the Mayor Gayden W. Morrill Charitable Foundation and $15,000 from the Newburyport Conservancy, the city plans to spend $80,000 to restore the basketball court and convert it into a multi-purpose space with three pickleball courts.

But that was before the 600-member Pioneer League, which organizes baseball and softball leagues on the park’s three diamonds, launched a campaign to thwart those plans.

The battle between baseball and pickleball has intensified in recent weeks. Neighbors on Merrimac Street and other streets near Lower Atkinson have also joined the opposition to adding pickleball the park largely because of the noise pickleball creates.

At the tennis club, Binder said, “We don’t have neighbors, and there is plenty of parking.”

Some pickleballers complained at the city council committee hearings on the proposed plans for Lower Atkinson, about having to pay for use of the courts at the private tennis club.

During the summer, Binder and Perrota said the fee would be $5 per person for the outdoor courts. That is comparable to the $3 fee collected at the city’s Cushman Park or at Salisbury’s Lions Park.

To play in the winter indoors at the club cost $10 per player. Tennis players pay $60 per hour to rent a court.

Because of pickleball’s rising popularity, court owners – whether public or private – are raising the fees. The New England Pickleball Club in Rye, NH, charges a yearly membership fee of $540 plus $8 per hour court fees.