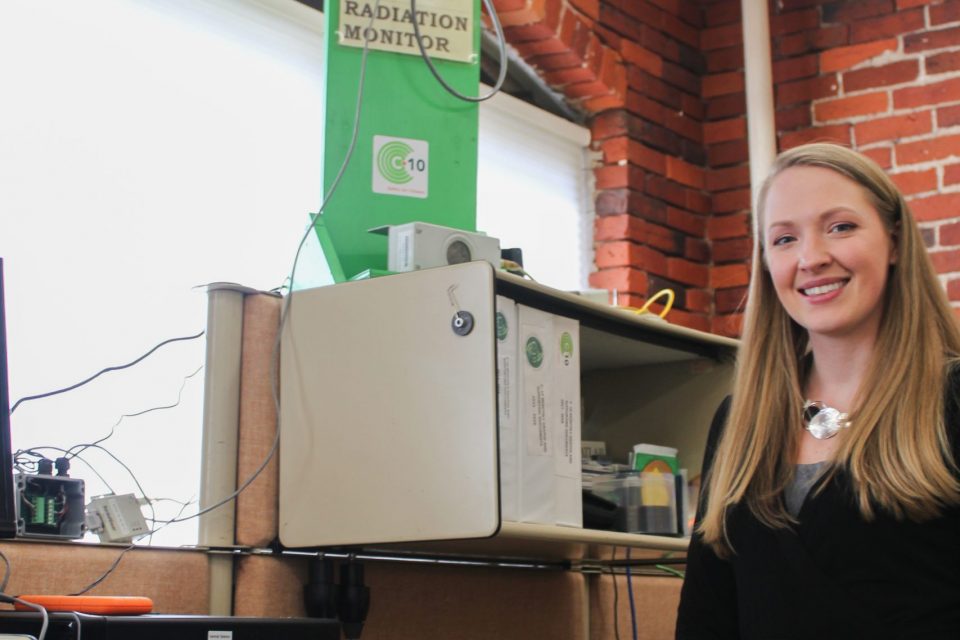 REGIONAL – Sarah Abramson became an environmental activist at age eight when she learned that there was a hole in the Earth’s ozone layer.

Fast forward more than two decades, and Sarah, now the mother of a two-year-old son, has a new worry about the planet – keeping the residents of coastal New Hampshire and Massachusetts safe from potential threats posed by the Seabrook Station nuclear plant.

When Abramson applied to the C-10 Research and Educational Foundation to become a volunteer, she was unaware that the executive director’s position for the organization that monitors the station was open.

After reading her resume, the board and its executive director Natalie Hildt Treat had a different idea. C-10 appointed Abramson to replace Treat, who was leaving to take another position. Abramson assumes the job on June 1.

“We are over-the-top pleased to be welcoming our new Executive Director Sarah Abramson,” wrote Patricia Skibbee, the C-10 board president and a West Newbury resident. “A month of CV (resume) reading, screening phone calls and in-person interviews brought us some amazing candidates, but as soon as we met Sarah, we knew we had found just the right person. She brings strong and varied skills, ideal personal presentation and focused passion for our safety mission.”

Treat, who served as the C-10 head for five years, agreed. “I thought she could be the one.” She praised Abramson’s organizational and communication skills.

The 30-year-old organization works to protect the health and environment of the area surrounding the Seabrook Station nuclear power plant. It monitors in real time any radiation leaks blowing in the wind, and it tracks and reports on any safety and security concerns at the plant, including the station’s concrete deterioration.

“You need a watchdog organization,” Abramson said in an interview. “The NRC is not doing enough.”

In an email, she elaborated, “I have enjoyed the benefits from C-10’s hard work to keep the Seabrook nuclear plant and the NRC accountable for their obligations to ensure that the plant’s activities are safe for our citizens and the natural environment.”

The 33-year-old Abramson, who lives in Stratham, NH within the 10-mile radius of Seabrook Station, wrote, “I have a young son, Miles, who I look forward to raising in Stratham, and as a parent, I will do nothing less than everything I can to ensure his safety and health.”

Citing the organization’s “compelling message,” she said she is excited to join C-10’s efforts at keeping watch over NextEra Energy, the Florida-based owners of the Seabrook Station.

Among the most pressing concerns is C-10’s efforts to monitor and challenge Seabrook Station’s management on the concrete degradation known as alkali-silica reaction.

Last year, C-10 convinced the NRC’s Atomic Safety and Licensing Board to order key improvements to how NextEra measures and monitors the concrete cracking at the plant.

Abramson grew up in Connecticut, the daughter of a submariner who decommissioned nuclear equipped vessels, and moved with her family to New Hampshire at age 12. She attended Purdue University in Indiana with a focus on environmental studies.

She is familiar with government regulation and licensing and described herself as a frequent reader of the Federal Register, the guidebook to the government regulatory process. In her last position in private aviation, she worked with the Federal Aviation Administration and the New Hampshire Department of Transportation.

She said she is not averse to conflict, realizing that being an outspoken advocate for public safety can ruffle a few feathers. “C-10 does work that affects real change,” she said.

A primary objective when she takes over the helm at C-10 is to increase the organization’s support from New Hampshire state government and private citizens. Its financial support comes from a contract with the Massachusetts Department of Public Health, from foundation grants and individual donations.

Abramson also wants to increase the awareness of C-10 and its programs among young people. She plans to provide educational programs, working with area schools and colleges.

For all that C-10 accomplishes, she said she was surprised that C-10’s staff was only two people. The other staff member is Michael Mansir, the monitoring network administrator. The rest of the work is done by volunteer boards.

“I thought it would be a bigger organization,” she said.

She understands that following in Treat’s footsteps will be challenging. “It is no small task for me to be taking over the shoes of a staunch advocate and passionate leader like Natalie,” she wrote. “I know she will be no stranger to the organization as I get my footing in this new role, and her mentorship along with the support from the wonderful and dedicated board of directors, will enable me to continue C-10’s absolutely necessary and valuable work.”

Treat, an Amesbury native, who lives with her family in Salisbury, is leaving C-10 to join the Boston-based nonprofit corporation, Northeast States for Coordinated Air Use Management (NESCAUM), and will continue with C-10 on its advisory board.

“Natalie has been exactly the leader C-10 needed. She has done spectacular work at C-10, and we will miss her profoundly,” Skibbee said. “She has led us into the 21st century on technology, and has established vital and solid relationships with our regional, state and local elected officials and with members of the press. Due to her work, C-10 has become a trusted source for factual and detailed information on the plant’s ongoing operational safety issues.”

As the C-10 leader, Treat oversaw the upgrade and expansion of the Citizens Radiological Monitoring Network, the nation’s only independent field monitoring network at a commercial nuclear reactor. C-10 is currently laying the fully funded groundwork to make the network resilient in the face of climate change by installing a radio communications system as well as solar panels and batteries to mitigate the impacts of power and internet outages

“When I became the executive director and learned about the impact that C-10 has made, I said to myself, ‘Wow. Every person living in the plant’s 10-mile emergency planning zone owes a debt of gratitude to this group for their efforts to keep us all safe’,” Treat said. “I feel that even more strongly today.”