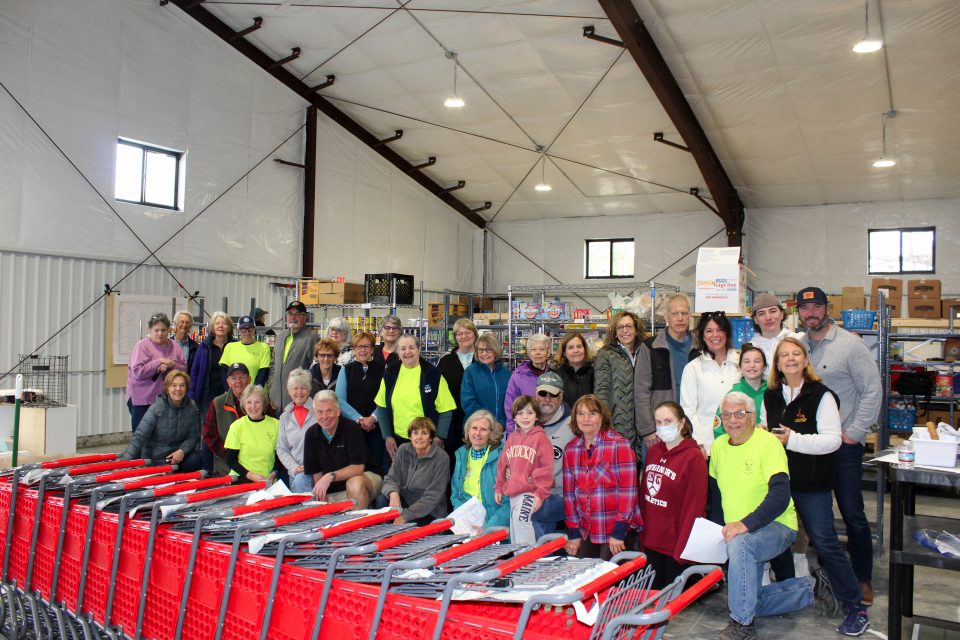 NEWBURY – It had already been a full day at 4:30 p.m. last Friday for the volunteers at the First Parish Church Food Pantry. The volunteers had started early packing bags of food from pasta to peanut butter in cars to deliver thousands of pounds of food stuffs to more than 300 families in the greater Newbury area.

In the early afternoon, the volunteers, which number 140, again loaded bags of food for dozens of other families that drive to the pantry for their food for the week.

Normally that is the end of the day for the volunteers. But not last week.

At 4:30, 35 volunteers began packing food and disassembling the shelves at its temporary Hanover Street location and the move to the new, larger building at the rear of the First Parish Church began.

Saturday morning, Ace Clean Outs arrived to move the heavy freezers and refrigerators and by mid-morning on Saturday, the shelving in the 2,400 square-foot building were installed and tons of food were being placed on the shelves for next week’s deliveries.

“A year ago, we didn’t know where we were going,” said Jane Merrow, the director of the food pantry. “It’s a miracle.”

One beneficiary of the food deliveries wrote: “I am so thankful that I found you. At the end of the month, I run out of money and don’t eat.”

Another wrote, “You are the light of hope for hundreds of seniors, families and individuals in our area. Thank you for all you do.”

The volunteers also expressed their gratitude to the pantry. Katherine wrote, “It’s a real pleasure to work in concert with such friendly, organized people. I loved the fast pace and the way the hours raced by. Thank you for the opportunity to help alleviate the overwhelming amount of food security in our midst.”

Jen, another volunteer, wrote, “I really enjoy volunteering with you and everyone else at the pantry. It’s such important work for the community and everyone is so welcoming and kind.”

And another volunteer wrote a few months ago, “It’s so rewarding to help such needy people. It makes me feel more useful.”

A year ago, in the midst of the Covid-19 Pandemic, the food pantry was out of space. When the church, because of Covid, took its Sunday gatherings remote, the pantry was inspired to move into the unused sanctuary, loading up pews with non-perishable foods and placing large refrigerators at the front of the sanctuary.

Then 11 months ago, as the Pandemic waned, the church wanted its sanctuary back. The church agreed that the pantry could construct a new building at the rear of the property.

In the interim, Mary Jo and Bryce Anderson stepped up and donated a 1,200-square-foot building on Hanover Road for the pantry’s use while the new building was being built. When the Anderson’s lease ran out, they extended it and never charged the pantry a dime of rent.

“It’s amazing all the support we have received,” Merrow said.

Over the last year, the pantry hit its goal of raising $320,000 to build the new food pantry. Major donors included the Institution for Savings Charitable Foundation, which pledged $25,000, and the Andersons, who hosted a fundraising event in their home that raised $15,000.

Significant contributions were also made by the Snell family, the Nun at Heart Foundation, the Taylor and Buckley families, the Howard Benevolent Society, Karen Jones, the Sean Perkins Foundation and New England Bio Labs.

As food and gasoline have grown more expensive, the pantry has been forced to raise more funds and look for new sources of food. The Boston Food Bank, a major contributor, has been forced because of worker shortages at its warehouse to cut back its monthly distribution of food from 20,000 pounds a month to 18,500 pounds a month.

Meanwhile, the pantry has been adding two or three households each month and getting 10 to 15 new volunteer inquiries each month.

The pantry offers to reimburse its volunteers for personal money spent on gasoline for the deliveries, but none of the volunteers have ever accepted it.

The ribbon cutting to mark the  opening of the new pantry is June 5.