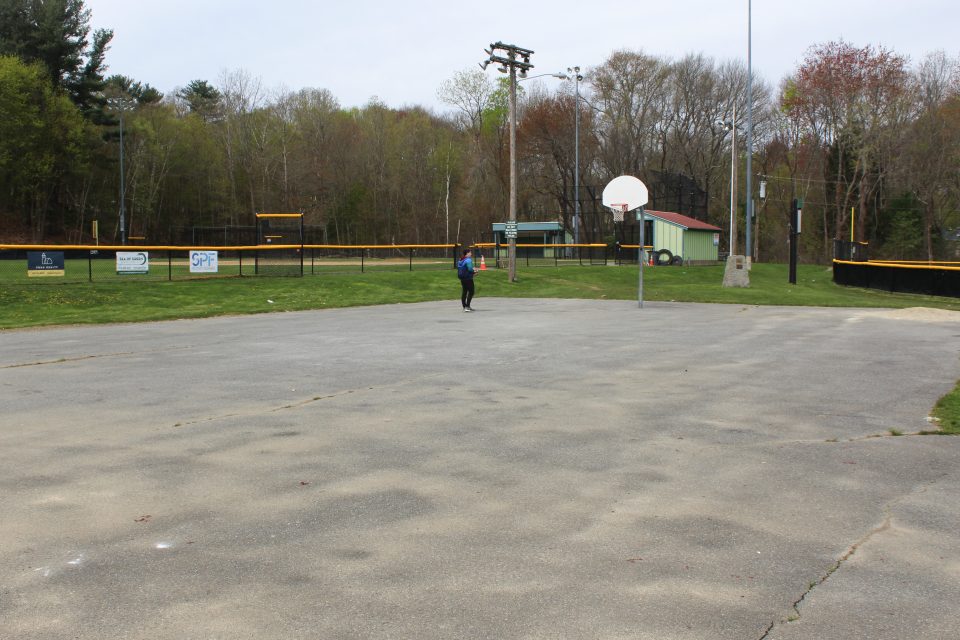 Photo: Stewart Lytle / The Town Common. Where the pickleball courts might go

NEWBURYPORT – It’s a battle between baseball, America’ national sport, which traces its origins to immigrants who brought a game of hitting balls with a bat from the Old Country, and pickleball, the nation’s newest sport, which traces its beginnings to a Sunday afternoon in the mid-1960s when parents were looking for a diversion for their children.

It could also be described as a fight for space between children wanting to play baseball and adults looking for the exercise and socialization.

City Councilmember Connie Preston said, “Every taxpayer has the right to use municipal facilities.”

The battle erupted last week before a city council committee over a plan by the parks department to build three pickleball courts in the middle of the baseball diamonds at Lower Atkinson Park on Merrimac Street.

The city council has already accepted a gift of $40,000 from the Mayor Gayden W. Morrill Charitable Foundation and $15,000 from the Newburyport Conservancy to spend $80,000 to restore the basketball court and convert it into a multi-purpose space with three pickleball courts.

The proposed four courts at Lower Atkinson “will provide more courts that we need,” Hohmeister said.

But the plan created an outcry from the 600-member Pioneer League, which sponsors organized baseball from T-ball to Middle School on the Lower Atkinson fields. A council committee, headed by Christine Wallace is trying to broker peace talks between the baseballers and the pickleballers.

“The parks commission does not appear to be listening, and we ask the council to intervene immediately and reject any plan approved for pickleball and review the park commission’s decision to move forward without the consent of the residents and the thousands of people who already use this park,” wrote the board of the Pioneer League in a letter.

At Lower Atkinson Park, there are three well-maintained baseball/softball fields, complete with fencing and dugouts. The league has solid support from sponsors whose banners are hung on the outfield fences.

Pickleball, one of the nation’s newest sports, is played by hitting a wiffle ball with a solid paddle over a net on a court about half the size of a tennis court. The Newburyport Pickleball Assn. has 220 members, the group said.

The primary complaint, which has rallied several neighbors to the park in opposition, is the noise caused by pickleballers hitting the plastic ball with the solid, ping-pong like, paddle.

There is also a problem with enough parking on busy Merrimac Street. On a Saturday when two baseball/softball games are being played, there were no parking spaces the street or in the new gravel parking lot next to the Head Start school on the corner of Plummer Street.

If pickleball is played on the basketball court, that will add at least 24 to 30 players, most of whom will come in separate cars.

Parking spaces on Merrimac Street has been a challenge for the city for years. Middle of the street signage has helped slow the traffic, but cars have to back out into traffic to exit.

The noise of pickleball has been a problem almost everywhere it is played. It was banned from Perkins Park in the south end when the city received a large number of complaints about the noise.

Tim Greenwood, a neighbor who lives 283 feet from the park across Merrimac Street, said “Noise will be an issue.”

Peter Carzasty, pickleball player, shot back, “If you want silence, move to the country. Noise is not an issue.”

Councilor Preston, who lives next to a park, said, “We live in an urban area.” She said she was not going to complain about the noise the park nearby creates.

In a letter, the Pioneer League board complained that the city parks department is moving quickly to get the pickleball courts approved without consulting it.

“There is no point to a public process where the public is ignored. No alternatives seem to have been considered for the grant money. Review of these meetings clearly indicate there is no consent for this plan. All protests from neighbors, families, and the league have apparently been dismissed.

Pickleball is now played on an underutilized tennis court at Cashman Park and at the Newburyport Senior Center.

The Newburyport Tennis Club built four courts on an underused parking lot last August for a couple of months until cold weather arrived. It then rented two courts on the weekends and Mondays inside the private club all winter.

The club is preparing to build the outdoor courts again for this summer.

Pickleballers, however, complained about having to pay for using the courts at the tennis club, which charges $2 per person to play.

Another issue is that the Pioneer League, which raises money to maintain the fields at Lower Atkinson, has not signed a new lease for the ball fields. The Pioneer League has paid an estimated $27,000 in maintenance fees each year. This includes landscaping, trash removal, park cleanup and updated painting and fencing.

Parks director Lise Reid declined to say why the Pioneer League has not signed its lease.

Pioneer League president Tim DeGraves did not respond to the same question.