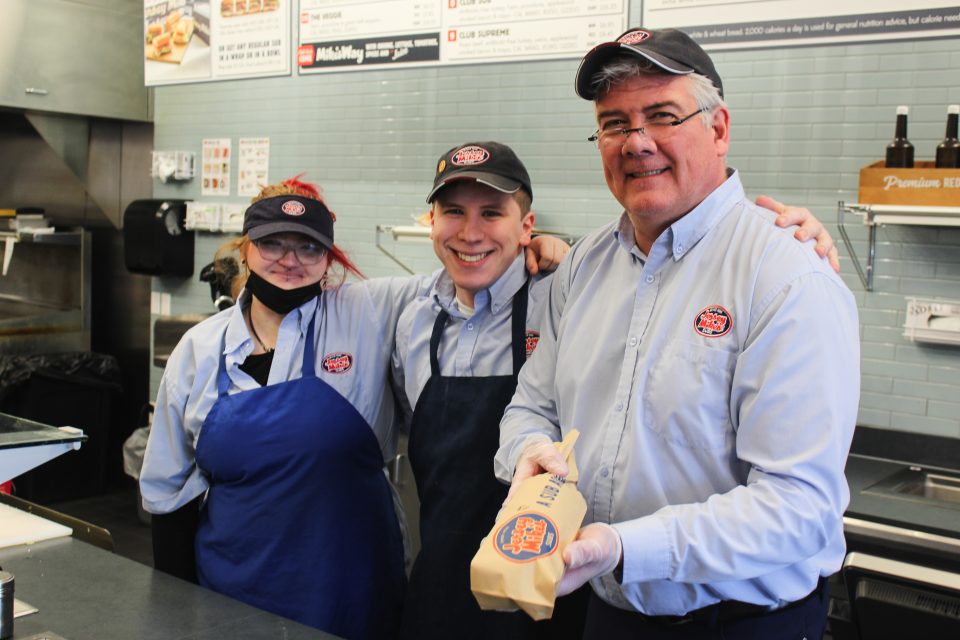 NEWBURYPORT – Last week, Jersey Mike’s 2,200 stores nationwide had its busiest day in company history as it raised $20 million to benefit the Special Olympics program. It was the 12th year the chain of submarine franchises has devoted its sales to a charity.

In the Newburyport shop, which recently celebrated its first anniversary at the location on Storey Avenue, customers bought 798 subs and raised almost $7,500. That was more than double the number of subs sold on the previous Wednesday.

Customers opted to round up their purchases, adding another $900. And the donation bucket collected $155.27 by the end of the day.

“It’s good to be part of a culture of giving where we can make a difference in people’s lives,” said Newburyport store owner, Kane Mosteller. “It was really fun.”

The 31 Jersey Mike’s in the Commonwealth raised $340,811 for Special Olympics. Across New England the shops raised almost $1 million through sales on the last day of March.

“What an incredible and heartwarming day,” said Caroline Jones, Senior Vice President, Jersey Mike’s Franchise Systems, Inc., and daughter of Founder Peter Cancro. “Our customers came out in droves buying subs to help our Special Olympics athletes.  It created our biggest day of sales ever. Thank you to our customers, franchise owners, team members and Special Olympics family for making a difference!”

This fundraising total exceeded the $15 million raised during last year’s campaign. Since Month of Giving began in 2011, Jersey Mike’s has raised more than $67 million for local charities.

“We are beyond humbled by the generosity of Jersey Mike’s and its customers,” said Joe Dzaluk, president & CEO, 2022 Special Olympics USA Games. “I was amazed at the energy and enthusiasm of the thousands of athletes, families and fans who visited Jersey Mike’s stores this month. We can’t wait for this June to display the grit, determination, and bravery of our athletes.”

Mosteller, a Rowley resident, said the first year of his Jersey Mike’s shop in Newburyport has been so outstanding, he is looking for a second location.