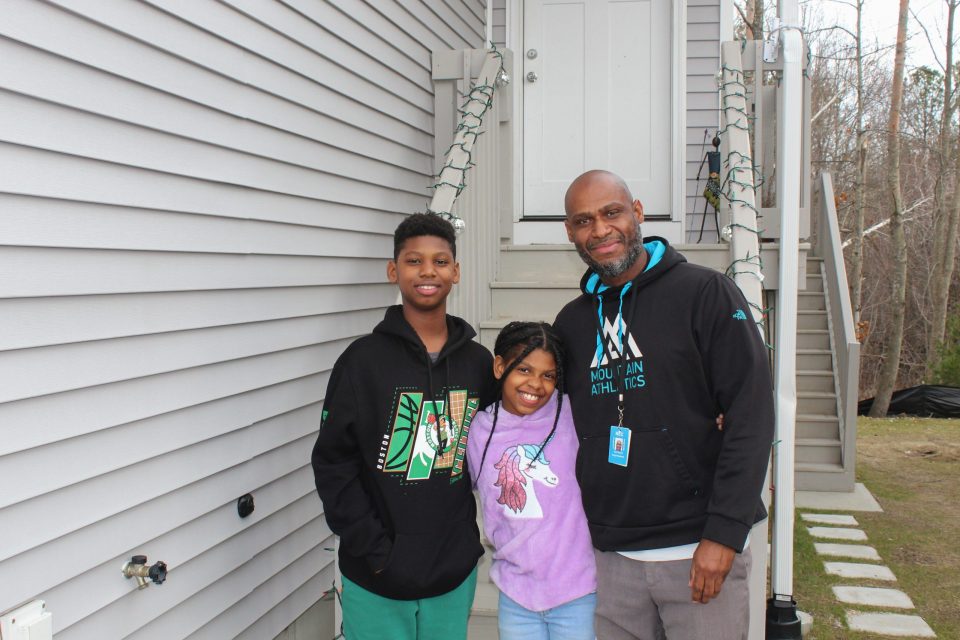 SALISBURY — Jessica Rivera, a single mother of four children, has been homeless two different times. She works 40 to 70 hours per week at three jobs to support her family who lives in a Haverhill apartment, where rent was double what she is paying for her new home.

Amarylis lives in a three-bedroom apartment in Lawrence, where her rent is so high, she has to sublease two of the bedrooms. She and her twin boys slept in one room with a full-sized bed and bunk beds.

Willie Gerrard moved to Mattapan from Haiti in 1991 and became a U.S. citizen eight years later. To escape an overcrowded apartment in a “violent” neighborhood, he and his two children moved to Salisbury.

Maribel, a dentist in her native Dominican Republic, could not practice dentistry in the U.S. She works instead as a personal assistant for the Private Home Care Services, often pulling 10-hour, overnight shifts, caring for elderly clients. She, her 15-year-old son Sebastian and 13-year-old daughter Adelina live in a $1,500-a-month, two-bedroom apartment in South Lawrence. Sebastian’s bedroom is not heated.

Misty, the mother of two, feared being homeless. Their apartment in Seabrook was sold for re-development, forcing them to move into a large multi-family building where drug and alcohol use was common in the hallways.

These families are among the first to move into brand new, 1,200-square-foot, three-bedroom homes they helped and are helping build as part of a new Salisbury neighborhood created by the Essex County Habitat of Humanity.

Habitat dedicated the new homes last week on Old County Road on land donated by the Institution for Savings.

Founded in 1976 by Millard and Linda Fuller, Habitat for Humanity is a global non-profit housing organization working in local communities across the U.S. and 70 countries. Habitat’s vision is of a world where everyone has a decent place to live.

Called “partnership housing,” future homeowners work with volunteers to build quality, affordable houses. The houses are built at no profit. New homeowners’ house payments are combined with no-interest loans, provided by supporters and money earned by fundraising to create The Fund for Humanity.

The Gerrards moved into their home on Dec. 1. Lights from their Christmas decorations still on the banister to the front door were a symbol of their joy.

“I feel like a weight was lifted off my children’s shoulders,” Gerrard said.

Four other homes – two duplexes — are under construction, and Habitat is working with the Town of Salisbury to secure more land for additional homes between the police station and the town trash facility.

The town has declared the property surplus, said Town Planner Lisa Pearson. “We are just waiting on Habitat.”

The first three homes dedicated last week — one single-family and a duplex — were started more than three years ago in 2018. “Habitat is not the fastest builder,” said Meegan O’Neil, executive director of the Essex County Habitat.

The organization uses volunteers, including the homeowners, along with contractors and vendors to build the affordable homes. Construction happens three days a week with volunteers and homeowners doing a lot of the unskilled work, while contractors do the skilled tasks.

Construction of these houses, O’Neil said, was delayed by the Covid-19 Pandemic’s supply chain and labor issues.

The design of the homes, which look similar in design to the surrounding residential neighborhood, was the last project by Jonathan Woodman, a leading Newburyport architect.

Of Woodman, Richard Sumberg, president of the Essex County Habitat board of directors, said, “I don’t know where architects go. Wherever you are, Jonathan, we thank you.”

As Sumberg thanked Woodman, a flock of geese flew over the new homes, surprising the crowd of Selectmen and state Rep. James Kelcourse, plus supporters and contractors that gathered for the dedication of the homes.

In dedicating the homes, O’Neil thanked the sponsors and volunteers and showered extensive praise on the new homeowners. “We are so proud of our families.”

Handing out gift baskets of food and flowers, O’Neil said, “It is the families who will complete the project. Only they can bring that final ingredient that will make these houses a home.”

A common theme in the biographies of each family is how determined they have been to provide a good home for themselves and their children.

Gerrard and members of his family far exceeded the number of hours Habitat requires of the new homeowners. Giving more than 130 hours on the house he now lives in, the father of two teenagers was told when he reached the 93-hour requirement that he did not have to keep coming to work on the house.

Being a homeowner is the “greatest feeling in the world,” he said.

The paraprofessional at the North Shore Academy assembled a time capsule, usually reserved for skyscrapers or new town halls, and placed it in the wall of his bedroom.

“I am 48 years old and a single dad with two children,” Gerrard said in the living room of his new home. “Not in my wildest dreams would I ever think that I would be here. I’m still pinching myself.”

Amarylis works at TD Bank and owns her own cleaning company. She is studying business management at Northern Essex Community College. Her manager at the bank said of her, “Customers love her for her charisma, professionalism and ability to show empathy.”

Her instructor calls her a “dream student. Her work ethic is to be admired and the enthusiasm and energy she brought to the class lifted everyone up and pushed her peers to be their best selves.”

Rivera, who has two children that graduated from high school and two more, Kaishalis Mendez, 16, and Jordan Rivera, 17, headed for graduation, said, “I’m living in the pot of gold at the end of the journey.”

Maribel was called “a woman of strong principals.”

Of Misty, her employer says she is “tireless in her attempts to better her life and those around her. She has a heart of gold that always steers her to what is right.”

For more information on Habitat, including an application to become a homeowner or a volunteer, visit essexcountyhabitat.org.