Flinging Into The Big Leagues 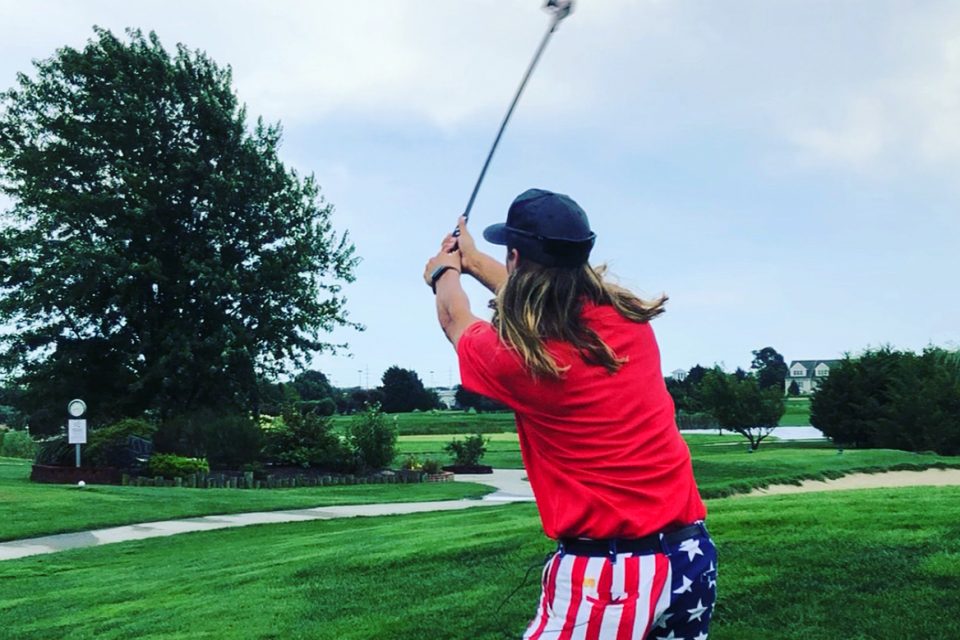 AMESBURY – FlingGolf will take the next step to being a world-class competitive sport this year when its first-ever tournament is broadcast on ESPN.

The New Swarm FlingGolf Open will be held over two days, May 21 and 22, at the American Classic Golf Club in Lewes, DE. It will include a standard golf tournament on Saturday and Sunday morning with the winner having the lowest score. That will be followed Sunday by a longest fling competition.

Winners of the New Swarm Open and Longest FlingShot Championship will take home at least $1,500 each. Players coming in second and third place will also win cash prizes.

ESPN will broadcast the tournament in August. Four sponsors will each get a 30-second advertisement during the broadcast.

“We’ve wanted to hold this tournament for years, but Covid slowed us down,” said FlingGolf founder and CEO Alex Van Alen of Ipswich. “It’s going to be a lot of fun.”

New Swarm FlingGolf, which offices in CIWorks here, combines aspects of lacrosse, baseball and hockey with golf. It is played on golf courses, but unlike traditional golf, players need only one FlingStick to play, not a bag of clubs. The FlingStick replaces the driver, irons and woods, wedges and putter.

To fling the golf ball, simply load the ball into the head of the FlingStick and throw it from the tee until the ball lands on the green. In place of a putter, the FlingStick has a striker pad on the side of the head.

Since 2014, FlingGolf has been played on more than 1,300 golf courses in every state and more than 30 countries. There is a governing body, the World League FlingGolf, which establishes and maintains rules, certifies professionals and courses and promotes events and leagues.

FlingGolf is also being adopted by the military, combat-injured veterans and civilians with health problems and challenges such as autism.

As of last week, more than 30 players from across the country had registered to play in the tournament. Prize money is $1,500 for the winner of each event. The entry fee for those who register before April 21, is $80 for the tournament and $40 for the longest fling contest or $110 for both.

Van Alen called the American Classic “a fun course,” which was one of the early adopters of FlingGolf four years ago. Its lead instructor Austin Ebersole was the first golf professional to teach FlingGolf.

According to the American Classic’s web site, “we do golf a little differently than your average golf course. We have nine holes instead of 18. We name our sandwiches after rock n’ roll kings. We enjoy wearing LOUD clothes. AND we like to deck out our golf carts in American flags.”

The course is fun and challenging with water and sand hazards and an island green on the sixth hole.

American Classic also hosts FingGolf Friday night. “The last few summers here at the American Classic, we have organized a laid-back summer fling league on Friday evenings, and it was nice to see many new people out on the golf course for the first time who wanted to get out but struggled to pick up regular golf. We will be bringing the league back this year and I cannot wait to see everyone out flinging again!” Ebersole wrote.

Van Alen expects the official record for longest FlingShots will be broken in May. “We have a lot of good players who have been putting in a lot of practice time,” he said last week.

Van Alen and his executive team that includes John Pruellage, New Swarm’s president, and Steve Bloom, vice president, are proud of the young company’s partnership with the military, injured veterans and families with challenged children.

After a clinic at the Air Force’s Fort Sam Houston Golf Club, Stephen Escobedo, the director of the San Antonio Chapter of Fairways for Warriors, wrote, “FlingSticks are going to be a game changer for the combat wounded veterans and their family members. Fairways for Warriors will now be able to assist more combat wounded veterans with their adaptive golf needs while making golf fun for the entire family. We are very excited to partner here in San Antonio with New Swarm.”

Dennis Aramanda and his son, Larry, took up FlingGolf after Dennis was recovering from cancer and looking for a way to get exercise and spend time with his son.

“We had been having a wonderful time and while walking up to the greens on the eighth hole, something truly amazing happened. My son, who is very high functioning Autistic, was thinking aloud and sharing how he could see himself and one or two friends going by themselves to play FlingGolf.

It was the first time in his 15 years that he had talked about possible friends, and much less, doing anything with friends on his own. “WOW! How great is that? A sport that he felt comfortable and confident enough in to play and enjoy, and even more so the inference of doing something with friends,” Dennis wrote.