Uni-Sex Restrooms for the Waterfront? 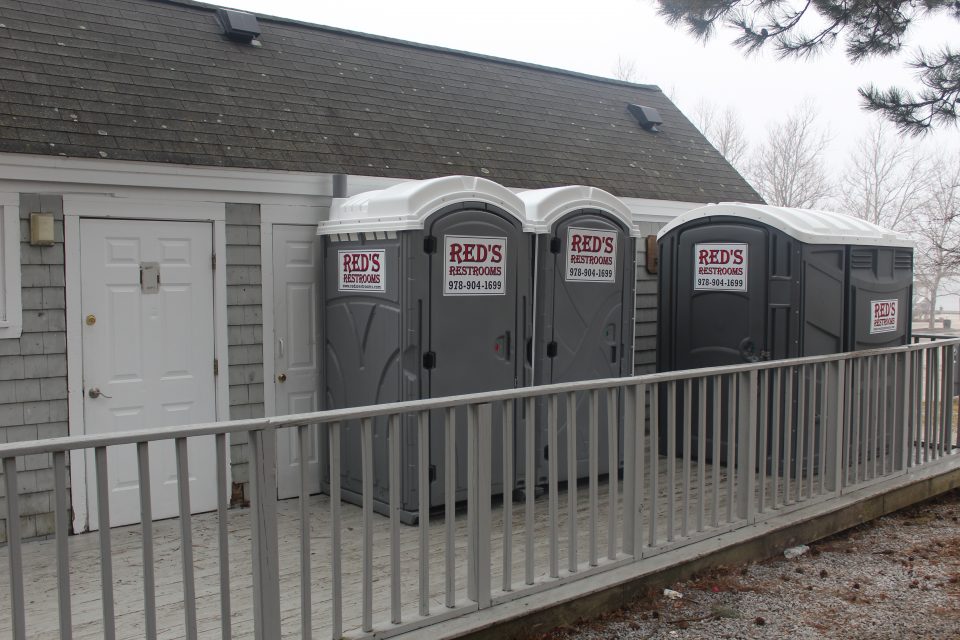 Photo: Stewart Lytle / The Town Common. The Red’s Port-a-potties that are restrooms on the waterfront park

NEWBURYPORT – Designing a public restroom can be tricky these days and may be much more expensive than members of the ad hoc committee on the Newburyport waterfront park expected.

After agreeing on most design issues for the new, 4-acre Market Landing Park on the Merrimack River, the committee last week took up the seemingly easy task of choosing a design for a visitors’ center and restrooms on Merrimac Street.

Everybody loves nice restrooms, but park patrons for years have had to use Red’s port-a-potties. The city built a permanent restroom on the south end at the Harbormaster’s office, but that is the opposite side of the park.

Councilor Ed Cameron noted the importance of having nice restrooms. Visitors who come to Newburyport to shop, dine and attend concerts want nice restrooms, he said.

Sasaki & Associates of Boston, the architectural firm designing the park, presented three configurations for a building on the west side of the park, costing an estimated $1.6 million, that would house a visitors center and restrooms.

There was no disagreement over the visitors’ center. But the five councilors on the committee split three to two on the choice of designs for the restrooms.

The dividing issue was whether the restrooms should be gender neutral. The first of the proposed restroom designs, which garnered the majority of three votes, called for a common area for males and females.

As resident Leslie Eckhardt defined it, did the city want to have young girls using the same toilets as men?

The uni-sex restroom design, which would be the smallest of the three proposals at 1,440 square feet, “would have toilets inside individual full height stalls, and sinks that are open and shared in the room,” said Lan Ying Ip, a principal architect with Sasaki & Associates.

“As per Massachusetts Uniform State Plumbing Code, 248 CMR section 10.10.(18)(b)(1), toilet facilities for each sex shall be provided in the amount specified in 248 CMR 10.10(18) Table 1 for assembly. We would be seeking a variance based on the notion that we are not separating into two separate rooms,” Ip told the committee.

The state plumbing code does not permit gender-neutral public restrooms.  To have uni-sex restrooms, the state plumbing board must approve a variance. The board’s next meeting is April 6, and Sasaki & Associates is preparing an application for the variance.

The board has approved numerous gender-neutral restrooms in facilities, including several buildings at major public colleges and universities, and Ip said she would expect the board to approve the variance for the waterfront restrooms.

The legislature is also considering a bill that would amend the state law governing the Board of State Examiners of Plumbers and Gas Fitters. “Under this bill, the Board is directed to amend the Commonwealth’s Building Code to permit gender-neutral bathrooms in both new construction and repairs or renovations of existing buildings,” Sasaki & Associates presented.

The International Plumbing Code has allowed gender-neutral restrooms since 2018.

The gender-neutral design will be presented to the full council by Councilor Heather Shand, who heads the Ad Hoc Committee.

The third design, which received two votes, was larger at 1,520 square feet. It would eliminate the inside common area and have all toilet stalls accessed from outside, much like the current port-a-potties.

The cost of the proposed restrooms floored some councilors. Councilor Jim McCauley said he was “hoping” that the restroom/visitors’ center building would cost $500,000 to $600,000, well below the projected $1.6 million.

Sharif Zeid was even more blunt about the rising costs of the park. “Are we designing something that we have no chance of building in the next five years? We have run into problems. We have run into a brick wall,” Zeid said.

And the proposed $8 million projected total cost for the park may be low, according to Kate Tooke, a landscape architect with Sasaki & Associates. She pointed to rising costs due to inflation and rising borrowing rates that caused the price for another project to double in cost.