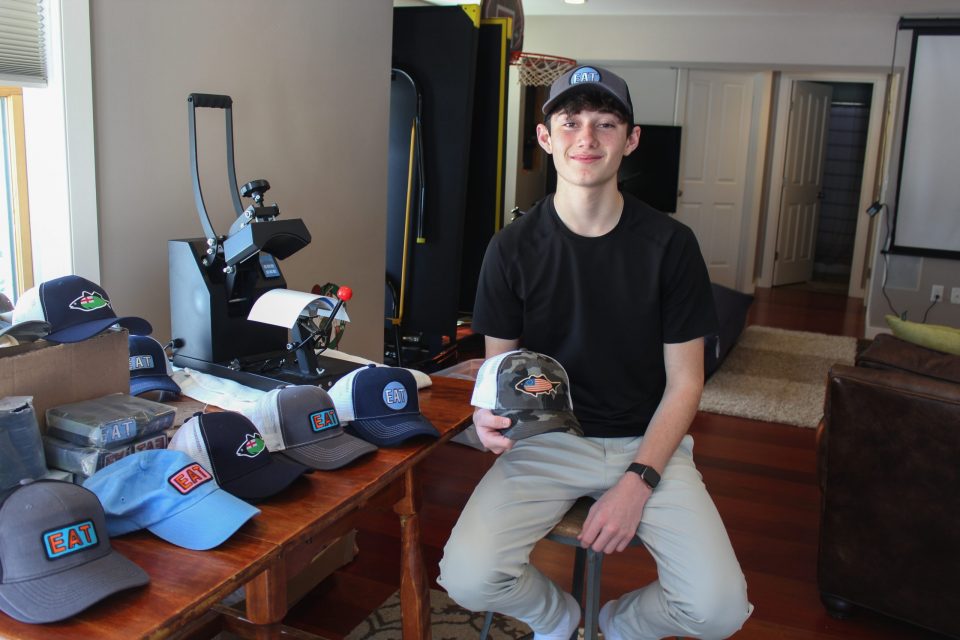 “I wanted to do something useful. I was tired of sitting around at home,” he said.

The 16-year-old Brown enjoyed meeting the people who came to the pantry in need of food and household products and bonded with the other volunteers who came to help.

“I wanted to get more involved,” he said.

From his walk-out basement studio in his parents’ house on High Road, he had created a business that designs and produces products. He started making stickers, such as the Newbury flag inside a fish. He progressed to the Stars and Stripes, with 50 and 13 stars, inside a fish. A big seller was the initials NBPT on a buoy.

The stickers sold well at $2.50 and $4 online and in shops like the Natural Dog, Leary’s Fine Wines and Spirits, Colby Farm and Tendercrop Farm. So, the young entrepreneur expanded, making key chains, koozies and bottle openers he designed. A Colorado company produces many of the products he designs.

But he wanted to do something special for the Food Pantry. The pantry was in the midst of a fundraising campaign in which it raised $320,000 to build a 2,400-square-foot, permanent home that will serve 300 needy people a week. The building is on track to open behind the First Parish Church at 20 High Rd in a few weeks.

Brown designed the logo for the Food Pantry and talked St. John’s Prep into helping raise thousands of dollars in gift cards for the pantry clients. But he knew he had the talent and drive to do more.

The answer was truckers’ hats with a message. His growing series of hats carries the message — EAT — on the front.

What does EAT stand for?

Brown explains on his web site. It is “helping to ensure that the good people in our local communities have the ability to EAT.”  The message, Brown said, is “Everyone should have access to food.”

“I was inspired to create the EAT brand after I was exposed to the incredible impact that that local food pantry had on my community. EAT is a bold way to highlight the problem of food insecurity and at the same time contribute to the cause,” he wrote on his web site, sandandflag.com.

He put the word, EAT, on eight different caps, priced at $20 and $25 each. He designed the hats, he said, to appeal to everyone.

Brown is dedicating 100 percent of his profits on the sale of the EAT hats to the pantry, roughly $14 per hat. To date, hat sales have generated $1,300 to the pantry operations.

He was given a table to sell products during Yankee Homecoming last year. “I sold so much,” he said he could not leave his table.

That produced the first $1,000 he donated to the Food Pantry. With that success, Brown became a regular at local festivals, selling his hats and other trinkets at the Newburyport Brewing festival, Invitation Nights downtown during December and at the Plum Island Taxpayers Assn parties.

“I wanted to get (the message) out there. I want to make an impact,” he said.

What’s next for Chris Brown? He is taking a 3D design course and visiting colleges.

To buy a hat or other Brown-designed products, visit sandandflag.com.