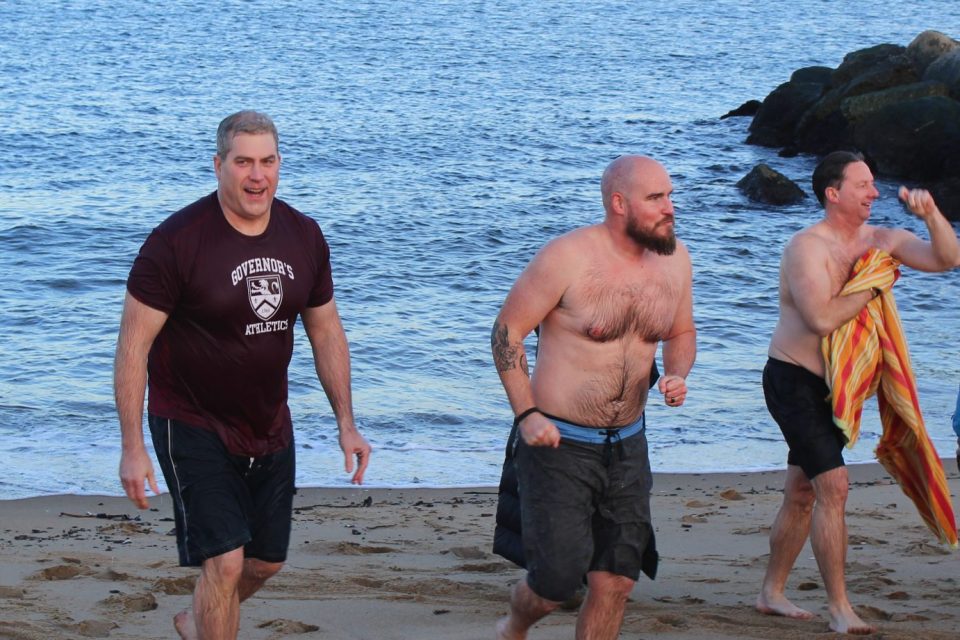 PLUM ISLAND – Normally this time of year, the fish, whales and seagulls have the icy waters of the Atlantic Ocean all to themselves. But lately, humans have been crashing into the waves as if it were summer.

All to raise money.

Last week, on Monday, one of the coldest days of the year, dozens of family members and friends cheered and an Atlantic Ambulance crew stood by just in case, as Nate Allard, president of the Greater Newburyport Chamber of Commerce and Industry and Newburyport Mayor Sean Reardon joined state Rep. James Kelcourse and Dennis Card, a chamber member, plunged into the ocean.

Wet, freezing, but smiling, intrepid quartet came out of the water to announce that their cold plunge had brought in more than their goal of $5,000. Patrons donated $5,404 to the chamber’s foundation to benefit economic development efforts.

If you want to contribute, donations can be made in cash, check or Venmo. Checks should be made out to the Greater Newburyport Chamber of Commerce Charitable Foundation and sent to the chamber office, 38R Merrimac St., Newburyport 01950.

Allard declared the first-time event “a huge success.”  Reardon said, “What fun,” as he made his way to the Sunset Club for a survivors’ after party. Allard confessed days later that he slept like a baby after the plunge. “I think I’ll keep doing it.”

Later in the week of very cold temperatures, Amesbury High School students, teachers, advisors and even the principal plunged into the waters off the Salisbury Beach State Reservation with the temperature just at freezing. They were raising money for the Special Olympics.

The plunge for Special Olympics was part of a statewide effort to raise $500,000. With Amesbury’s and other plunges not included, the campaign had raised more than $455,000 to empower more than 14,000 Massachusetts Special Olympics athletes to train and compete in sports, while creating friendships and celebrating inclusion of individuals with intellectual disabilities on and off the playing field.

The Amesbury High School Student Council had set a goal of raising $2,500 for the Special Olympics program this year. Even before the plunge, it has exceeded that goal by more than $300.

No wonder. Who wouldn’t want to donate to see the school’s interim principal, Dr. Danielle Ricci, dive into the cold water? Ricci was joined by Sarah Luz, the school’s post graduate life skills teacher, and their advisor Jean Brockmyre.

Ricci and Luz committed to stay immersed one minute for every $100 raised, which sounds excoriatingly painful. But Ricci confessed that she swims off the Salisbury coast weekly. “This is normal for me,” she said.