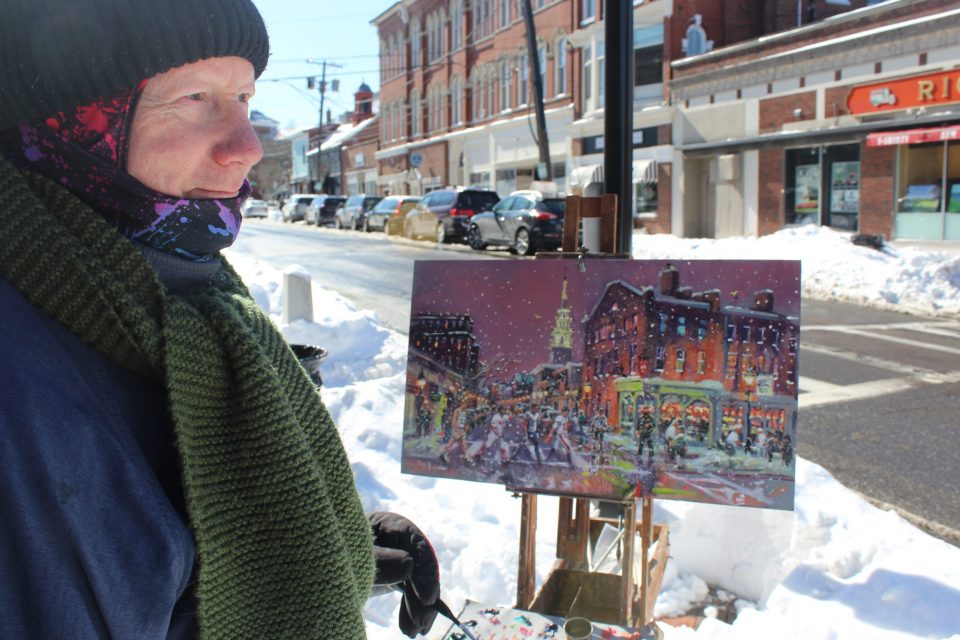 NEWBURYPORT – Several Boston sports luminaries – Byrd, Big Papi, Gronk, Brady and Bobby – showed up in downtown Newburyport last week at the corner of State and Pleasant streets. At least they were there in the imagination of local painter Richard Burke Jones.

The five athletes are depicted in Burke’s 14-inch by 24-inch oil painting, walking across Pleasant Street near the Richdale Convenience Store in the style of the Beatles’ iconic Abbey Road album.

Bobby Orr is painted wearing ice skates on the street asphalt as he watches Larry Byrd, wearing his memorable No. 33 green Celtics jersey; David Ortiz in his Red Sox uniform, Rob Gronkowski and Tom Brady in their Patriots’ jerseys, walk across Pleasant Street.

Jones, a prolific painter of scenes mostly of his hometown, has started adding famous people to his paintings. He painted two former Presidents — Barack Obama and Donald Trump — in a Newburyport scene. The painting sold quickly.

The current painting, entitled State at Pleasant St with Boston Players, is available for $600 on his web site, richardburkejones.com/collections/frontpage/products/state-at-pleasant-st-with-boston-players.

Burke, who is the Newburyport City Clerk, is a familiar figure around town as he paints scenes of local buildings and landmarks. Standing at his easel, braving the weather, he has become something of a tourist attraction as residents and visitors stop to watch and comment on his paintings as well as almost any other subject.

“As I was painting this on State St Newburyport Sunday evening, a family from Indiana asked if I was putting a fourth sports figure in – sort of like Abbey Road. They lobbied for Larry Bird as they grew up near French Lick,” Jones wrote on his web site, describing the painting.

He added the Hick from French Lick, in shorts and a sleeveless jersey on a winter’s day, in the George Harrison fourth position of the Beatles’ cover. Brady leads the group in the John Lennon position, followed by Gronk in the Ringo Starr position. Ortiz is third in the Paul McCartney position.

Some passers-by questioned Jones’ choice of Gronkowski in the company of Byrd, Brady, Ortiz and Orr, he said.

They thought Gronk has not had the level of success that the Greatest Quarterback of All Time, the 10-time baseball All Star, the only defenseman who won the NHL league scoring title and the power forward who led the Celtics to three NBA championships.

In Gronkowski’s defense, he was a major factor in four Super Bowl wins by his teams – the Patriots and Tampa Bay Buccaneers. He is also a five-time Pro Bowl selection, a four-time First Team All-Pro selection and was selected to the NFL 2010s All-Decade Team and the NFL 100th Anniversary All-Time Team.

Jones said some passers-by suggested he should have included Ted Williams, considered one of the greatest hitters in baseball history and to date the last player to hit over .400 in a season. Williams, who also played for the Red Sox, was voted an All Star 19 times All-Star. He hit 521 home runs.

Williams would be worthy of being included, Jones said. And if he were still alive, he would certainly have been welcomed to downtown Newburyport. But, he said, “He didn’t come by.”

For more on Jones and his art, visit https://richard-burke-jones.myshopify.com. There you will find his art on canvases, but also on sweatshirts, pillows, and thanks to Covid-19, facemasks.