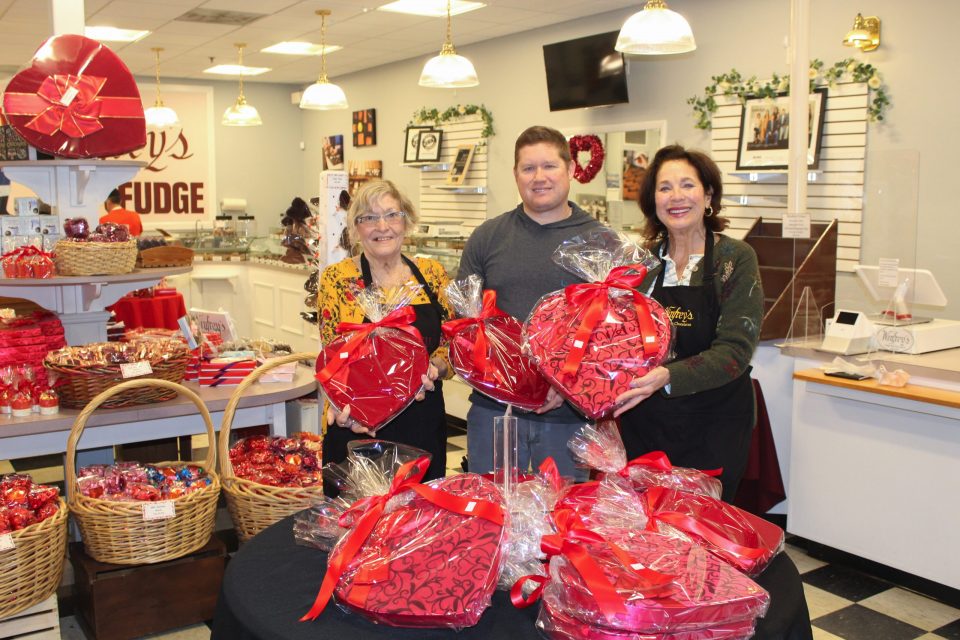 You still have time to make it to one of the Winfrey’s shops or another retailer that sells its chocolates. But don’t dawdle. Like most retailers these days, Winfrey’s is struggling to produce enough goodies to meet the demand during its second busiest time of the year.

Only Christmas is busier for the 42-year-old chocolate maker.

“We keep plugging. We focus on the things we can fix,” said Mark Winfrey, who now runs Winfrey’s with his twin brother, Scott, and sister, Jillian.

Some items, like chocolate covered marshmallows, may not be on the shelves. But don’t worry, the shelves are filled with the most popular items like the wide variety of fudge, guaranteed to bring a smile.

The new generation of Winfrey’s took over ownership of the North Shore chocolate empire from their parents, Christine and Stuart Winfrey, in 2019. That was just a year before the Covid-19 Pandemic struck.

Like other retailers, the Winfreys have coped with shortages in labor to run a second production line, and in finding enough chocolate and sugar. They are currently running production with six employees, down from the usual 10.

“This is the biggest challenge we’ve faced. But we are navigating,” Mark said.

Mark heads the wholesale operations, including shipping. Scott is in charge of production. And Jillian runs the marketing department plus Winfrey’s four stores in Rowley at 40 Newburyport Turnpike, in Stoneham at 41 Main St., in Middleton at 189 South Main St. and in Wenham at 143 Topsfield Rd.

“It’s pretty amazing how understanding everybody has been. Its good,” Mark said. They buy what’s on the shelf, not necessarily what they came looking for.

Winfrey’s started after Chris and Stuart brought home their twins, Mark and Scott, weighing about twice what a large box of fudge does. They decided they needed to be home to care for the boys, so both quit their jobs and started a home business, making fudge on a gas stove in the basement.

“Every time we made a batch of fudge, we realized we also heated our home. We were on a mission to stay warm and conserve our money, so we quickly realized we should make lots of fudge!” Chris wrote in a blog.

As more stores bought their fudge, the one stove in the basement was not enough to keep up with the demand. They converted an old foundry in Danvers to manufacture and store the products. Soon, they were making 500 pounds of fudge a week and selling it in stores, primarily Brighams ice cream and candy parlor.

The wholesale business for Winfrey’s has always been strong, offering Winfrey’s fudge and chocolates in stores across the state that often repackage the chocolates as their own.

But recently the Winfrey’s stores have begun outselling the wholesale business, Mark said.

The chocolate business is seasonal. After Christmas and Valentine’s Day, there are spikes in sales for Easter and Mothers’ Day. But by summer, sales level off, Mark said, which he likes because he enjoys going to the beach in the summer.

Winfrey’s offers more than 23 varieties of its cream and butter fudge, 22 flavors of the saltwater taffy and more than 100 fine chocolates.

If you want to impress your significant other as he or she nibbles on a piece of Penuchi Fudge, tell him/her the name comes from the Mexican word for raw or brown sugar.

Or a Caramello is a layer of vanilla caramel and a layer of fluffy nougatine encased in chocolate.

Fudge is a blend of sugar, cream, butter and chocolate and flavor, cooked over an open flame in copper kettles. Chocolate is made of cocoa butter, cocoa powder, milk, sugar and vanilla.

For those who procrastinate, Winfrey’s is open at 11 a.m. on Sundays. But you would be wise to pick up your box of chocolates before they sell out. The shops are open from 9:30 to 6 p.m. Monday through Saturday.