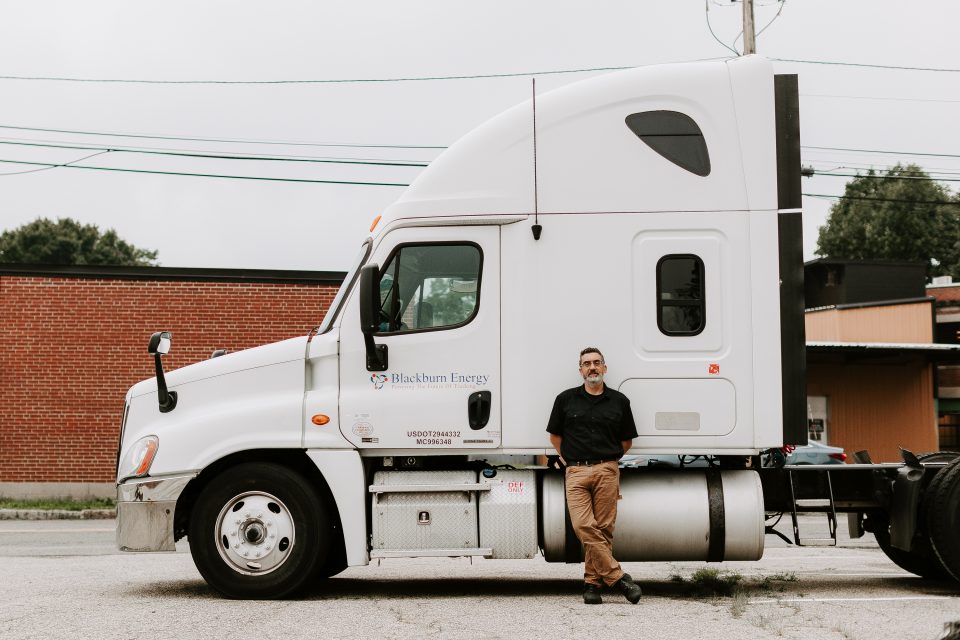 AMESBURY – At a time when there are too few people willing to drive 18 wheelers, when the world is experiencing global warming because of too much carbon in the air and when there is not enough electricity, it is too expensive or not available in remote areas, Andrew Amigo has built an affordable solution.

At CIWorks, a block from where the first electric cars were built, Amigo, the founder and CEO of Blackburn Energy, has created a system to turn “all commercial vehicles into platforms that create, store, use and deliver clean energy.”

Much like a Toyota Prius harnesses kinetic energy from the car to replenish its electric batteries, Amigo has developed a system to capture wasted energy in large trucks. The energy is stored in battery packs and used to electrify diesel trucks without the need for costly infrastructure.

The system was first deployed in the market to power the air conditioning, lights, computer and TVs for drivers overnighting in their cab without idling the engine. Today, Amigo’s system can power everything on a truck including the engine cooling fan, air conditioning and liftgates.

Unlike battery electric trucks, his system does not drive the vehicle, rather it uses the harnessed electricity to make diesel trucks cleaner.

If not needed by the truck itself, the captured power can be plugged into a micro-grid to run a factory, electrify a house or provide refrigeration for a remote medical clinic.

Calling his invention a “paradigm shift,” Amigo caught the attention of one of the world’s most influential companies, Toyota Tsusho America, Inc. (TAI), which has invested millions in Blackburn’s system in recent months and will help sell it to truck fleets around the world.

“We are pretty happy to have them as a partner,” Andrew said. “This new collaboration with Toyota Tsusho is a new beginning for Blackburn and a much-needed jolt for clean transportation.”

His Hybrid Charging system can be used to raise the mileage of a truck from 6.5 to 10 miles per gallon. It makes the truck much more efficient and profitable. And once installed on trucks worldwide, his battery packs will reduce CO2 in the air more than any other green measure, he said.

It began in Amigo’s barn in Essex almost a decade ago. A one-time international attorney, he was taught to drive trucks by his father when he was in his mid-teens. It has been a love affair since.

One day, he sat in traffic next to truck, watching it burn diesel to move and then throw that kinetic energy away every time they stopped. Amigo wondered if he could harness the wasted kinetic energy.

It took him several years of hard work, sleepless nights and dire financial straits to prove, but the answer to his question is yes. The RelGen system he developed can power a truck and much more.

Joel Logan, vice president and division head of Global Parts and Logistics at TAI, said in a news release, “RelGen has robust functionality and is a timely solution for anti-idling and emission reduction, but also creates value by reducing fuel and maintenance costs. We are excited about the future of clean trucking and the possibilities created by this new investment.”

TAI invested $2.5 million in Blackburn’s seventh and latest round of fundraising to bring the RelGen system to the world.

Blackburn is now using recycled nickel-metal hydride batteries from Priuses in its battery packs because they are lighter and last longer, Amigo said.

Knowing it would take a Herculean effort to bring his hybrid-charging system to the slow-to-change trucking industry, Amigo chose to name his company after Howard Blackburn, one of his Cape Ann heroes.

Blackburn, a legend in Gloucester, moved from his native Nova Scotia to become a fisherman in the 1880s. He and his partner, fishing from a Banks dory, were separated from the schooner in a winter storm. Having lost his mittens, Blackburn began to row to shore. On the second day, his partner died, but Blackburn kept rowing for three more days, his bare hands frozen, curled around the oar. When he reached Newfoundland, he carried his partner’s body ashore.

He arrived back in Gloucester a hero, but frostbite took all his fingers, both thumbs to the first joint and many of his toes.

Blackburn opened a tavern, but never gave up going to sea. He twice sailed alone across the Atlantic Ocean, overcoming his disability and setting record times for the crossing. Blackburn died in 1932, but left his spirit and legacy to a future inventor and entrepreneur.

Amigo said bringing the hybrid-charging system was “hard and painful at times.” Out of money several times, his employees stuck with him.

“We had to keep rowing,” he said. “Maybe we will lose a finger or two.”

The Pandemic hit the company hard. “We survived 2020,” he said, but only barely. “This has been a long process. We fought very, very hard to raise money and keep everybody employed.”

Months when there was no money for his salary, he still paid his four full-time employees. “If we hadn’t done that, we wouldn’t have gotten this investment,” he said.

The RelGen system is now patented in 11 countries and more are on the way.

Like Blackburn dreaming of crossing the Atlantic, Amigo has long dreamed of trucks delivering charged batteries to remote medical clinics in third-world countries. Trucks, which ply the roads of every country, could drop off the batteries on the outbound trip, powering the refrigeration for the clinic and maybe even the houses for the villagers. On the return trip, the trucks can switch the batteries out until their next trip.

His dream is fueled by his belief that there is “so much wasted energy in the mechanical world, and we should look to harvest this energy as a renewable resource.”

“At Blackburn, we believe that if you provide people with cost-effective market-based clean energy solutions,” Amigo said, “those people will change the world today building a much cleaner future.”