Above and Beyond to Help Fire Victims 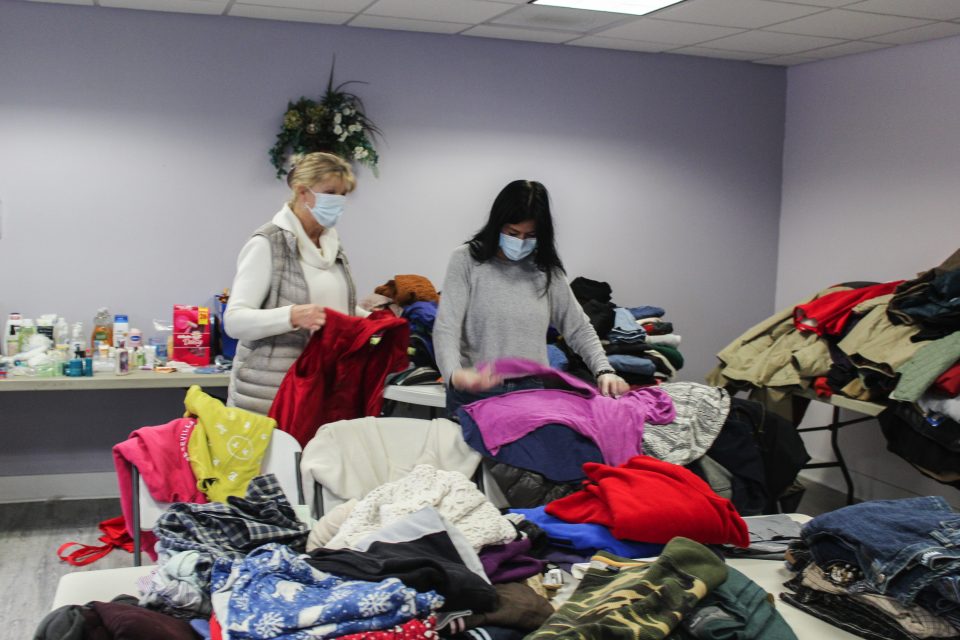 SALISBURY – On the Dr. Martin Luther King Jr. holiday last week, 32 people from 24 families, including a six-year-old boy, two dogs, a parrot and a ferret, came to the Hilton Senior Center in shock and sleep deprived.

They had been roused from their beds after midnight Monday by police and firefighters telling them something that is still hard for most to comprehend — their home was on fire.

“They were in shock. They just wanted a bed,” said Liz Pettis, director of the senior center.

Last week, Pettis, whose normal job is to create fun and interesting programs and provide services for the town’s seniors, was thrust into the role of managing an outpouring of donations and bringing together a variety of agencies to offer help and comfort for those who had lost everything.

“There have been a lot of tears,” Pettis said in the lobby of her office, a few feet away from where one of the survivors was being counseled.

Fire Marshals have not determined the cause of the fire that destroyed Michael’s Oceanside Motel, two apartment buildings and two houses on the edge of the parking lot of the Pavilion, the home of the Blue Ocean restaurant and event center.

According to the firefighters on the scene last Monday, the fire started between the motel on the beach and an apartment house on Central Avenue. The heavy rain and hurricane-force winds destroyed most of the evidence at the scene, a fire department employee said.

“Our top priority throughout the night was to protect the surrounding community from a large and growing fire that had been pushed toward other structures by high wind conditions,” Fire Chief Scott Carrigan wrote in a news release.

“I want to recognize the Salisbury firefighters who fought relentlessly against the threat that this fire posed to lives and property under extremely challenging weather conditions, as well as the many fire departments which provided mutual aid,” Carrigan wrote.

The fire was first reported just before 2 a.m. by a MassDOT employee who called 911 after seeing smoke and flames from the buildings on the beach.

“What we do know,” Carrigan wrote, “is that this fire started, grew and spread in the middle of the night when most people were sleeping.”

The four residential buildings and the motel are considered a total loss, and some nearby buildings, including 27 Central Ave. were partially damaged by the flames.

Carrigan used the worst fire in Salisbury in decades to remind residents to be sure their smoke and carbon dioxide alarms are working. “Whatever you do today, check your smoke alarms. The cost of installing fresh batteries or replacing alarms that are more than 10 years old is a small price to pay compared to the damage we saw at this scene.”

Pettis praised the North Shore communities for coming to the aid of those who were burned out of their homes. “The community has stepped up. The Salisbury community cares, and they have shown it,” she said. “They have gone above and beyond.”

As soon as the stuff comes in, it goes out, Pettis said. The exception is clothes. So much clothing was donated, piles overflowed into the hallway at the center.

Pettis said the center was having to take a pause on accepting clothes.

Pettis set up tables for the clothes in one room of the Hilton center that normally is used by seniors who gather to knit, sew and talk with one another. In the main room, where seniors dance, exercise and enjoy daily and holiday meals, several state and municipal agencies, like Child and Family Services and the Registry of Motor Vehicles, set up resource stations to meet the victims’ needs.

Caregivers, including the Salvation Army and the American Red Cross, were quick to arrive at the Hilton Center. None of the victims stayed overnight at the center. The Red Cross delivered $500 vouchers for motel stays and promised more depending on the individual housing needs.

After food and shelter, the biggest need was to replace car keys, driver’s licenses, prescriptions and phones, all of which were left behind as the residents evacuated.

A Lions Club member opened an apartment he owns to a family of five that includes the child and pets.

After reading about the fire on social media, residents showed up with cash donations and thousands of dollars in gift cards to stores like TJMaxx. One woman, who identified herself only as Lauren, brought a TJMaxx gift card, but when she heard about the dogs, ferret and parrot, she left promising to return with PetSmart gift cards.

Carrigan thanked the more than 100 firefighters and 30 apparatus from surrounding communities and New Hampshire that responded to fight the fire. The Massachusetts of Fire Services deployed specialized apparatus and personnel to support communications and firefight health and safety. The Massachusetts Emergency Management Agency, Cataldo Ambulance, Boston Sparks Assn. and Rehab 5 also assisted.

To contribute to the fire victims, the town has set up a fund. Checks should be made out to: