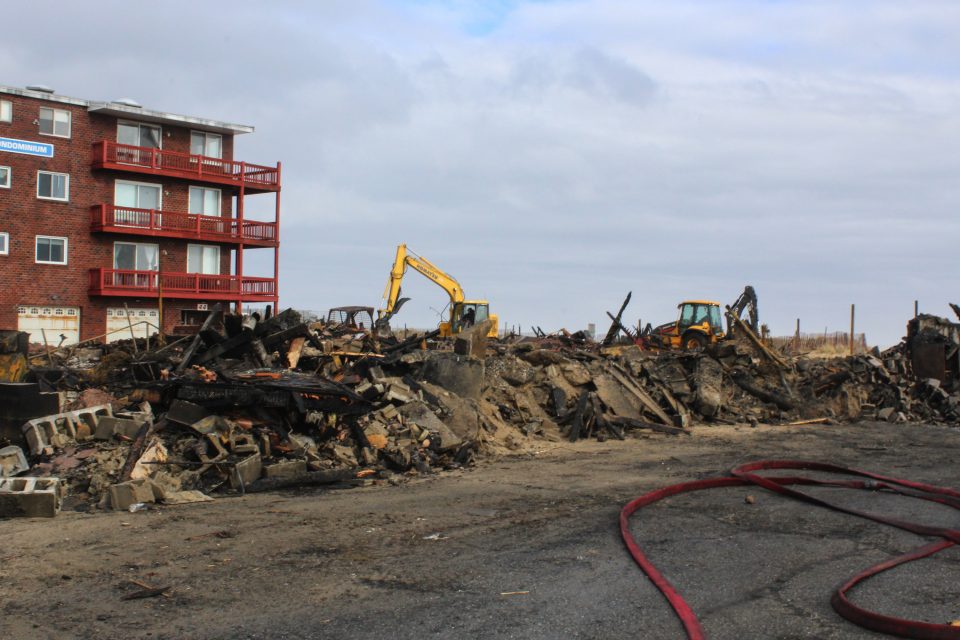 SALISBURY BEACH – On the northern edge of the parking lot of the popular Pavilion events center, Michael’s Oceanfront Motel, an apartment house and three homes, were burned to the ground early Monday morning in a nine-alarm fire that brought firefighters from surrounding communities.

Firefighters, braving cold, rain and 30-mile per hour wind gusts that pummeled sand in their faces, could not save the buildings between Central Avenue and the beach. But they were able to rescue more than a dozen people.

“We got everybody out,” said a jubilant Salisbury firefighter.

The Pavilion, owned by the Capolupo family, houses the Seaglass Restaurant and a concert and event venue. It was not touched by the fire.

Salisbury Fire Capt. Andrew Murphy said, “We had hurricane-force winds. We did everything we could.”

By mid-day Monday, the State Fire Marshals were at the scene and had launched an investigation. The site was cordoned off and onlookers prohibited because it was “a crime scene,” a senior Salisbury police officer said.

The fire apparently started in the vicinity of the apartment building and motel, but no cause had been announced.

The apartment house that has housed a small bakery faced Central Avenue. Behind it on the beach, the two-story Michael’s Oceanfront Motel rented 12 rooms, including five beachfront rooms.

The three homes that were destroyed were adjacent to the Pavilion parking lot.

John McGuirk, a neighbor, was woken up and told to get out of his house. He told WBZ-TV, “An officer pounded on my door and screamed everybody has to evacuate this area. There’s a fire right up the street and it’s coming your way. Everybody’s got to get out of here. I just immediately woke my roommate up, and I got right out of there.

Those displaced were given temporary shelter at the town’s Hilton Senior Center and are being cared for Salisbury Emergency Services and the Red Cross.

The Pavilion property sits on the site of the former Shaheen Amusement Park, which once included The Beach Club, a popular nightclub that in its heyday featured nationally renowned entertainers. The Capolupo family, which is dedicated to improving Salisbury beach, purchased and renovated the properties in 2009.