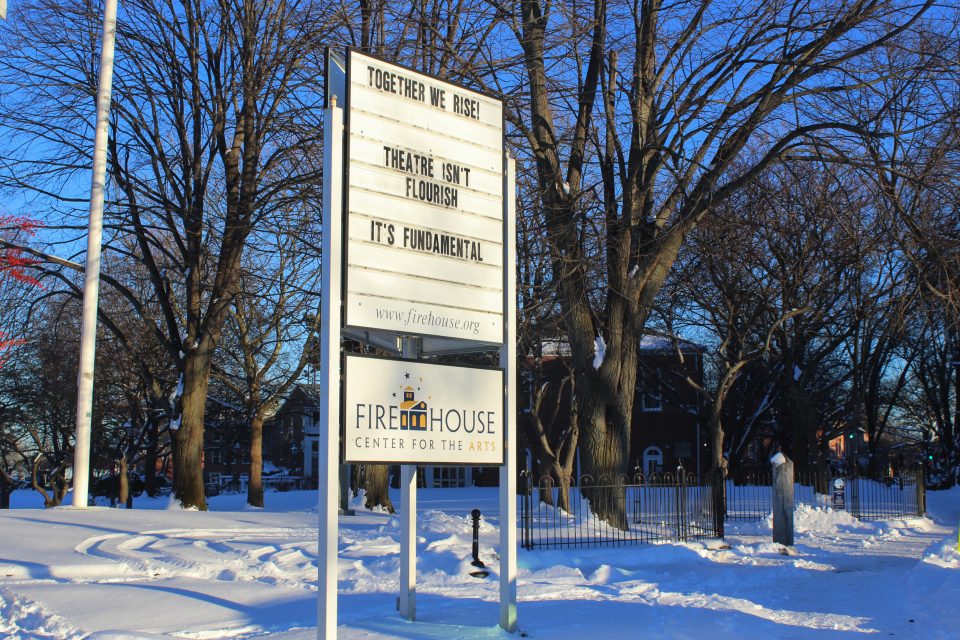 Photo: Stewart Lytle / The Town Common. The billboard outside The Firehouse Center for the Arts.

NEWBURYPORT – When Marc Clopton was living in California, he discovered the artistic community of Laguna Beach. The Pacific coastal town was hard to get to, but to Clopton’s surprise, people flocked there to enjoy its galleries, performing arts venues and museums.

The town is, as the Laguna Beach Arts Alliance calls it, an “axis for artistic expression.” And while all those tourists walked around the small community, they shopped and dined and bought tickets to events, nourishing the local economy.

Thirty years later, Clopton, the president of the Actors Studio here, never forgot Laguna Beach. Now he and other leaders of Newburyport arts and cultural organizations are on a mission to brand this Atlantic coastal city for residents and visitors as another axis of artistic expression.

Last fall, they formed the Newburyport Arts Collective (NAC) “to preserve and expand our organizations’ arts and cultural offerings through advocacy, integrated promotion, and a free-flowing exchange of ideas, knowledge, and resources.”

John Moynihan, executive director of the Firehouse Center for the Arts and a leader in forming NAC, said having a strong arts community is good not just for the city’s image, but also for the bottom line of local shops, restaurants and hotels.

Studies show that patrons of the theater, museums and art galleries during their visit spend $32 each in addition to their tickets and purchases. Moynihan estimates the arts and cultural organizations contribute about $3 million to the local economy.

And an arts-friendly image can also help economic development, Moynihan said. When a company is looking for space to expand or relocate, one of the most key factors it considers is the arts in the community, he said.

With more than 100 arts and cultural organizations in the city, Newburyport has a vast and diverse arts community, Clopton said. Even before the Pandemic struck, those organizations “are all in the same boat,” he said. “We are all trying to survive and thrive.”

Asked how NAC is progressing, he said, “The spirit of collaboration is alive and well in Newburyport. That’s not a surprise. We have all been working together for years. We have lots of talented volunteers.”

Each of the arts and cultural organizations need space for rehearsals, performances and exhibits. They need storage space for equipment, costumes and sets. They also need to leverage each other to bring in more customers.

And because each non-profit group in this relatively small community is asking the same potential donors for money, NAC will help coordinate its members’ fundraising efforts.

Seven or eight years ago, Newburyport was designated as an arts and cultural organization. “That caused a lot of excitement,” Clopton said. “We held a celebration at the Actors Studio. But then nothing happened.”

The NAC hopes to change that. By combining forces, the young organization hopes to attract more visitors to the city and persuade the city government to provide more support for arts organizations. Already NAC is talking to School Supt. Sean Gallagher about using school buildings for rehearsal space.

Mayor Donna Holaday’s office has been good for the arts, Clopton said. Moynihan hopes for the future, the city will designate a staff person to work directly with the arts and cultural organizations.

The Greater Newburyport Chamber of Commerce has joined NAC, and president Nate Allard is dedicating more time working with the non-profit organizations that are chamber members.

NAC plans to capitalize on the community’s history, live theater venues and art galleries. The city has the Newburyport Literary Festival and the Newburyport Documentary Film Festival. “There is so much to build on,” Clopton said.  “We need more.”

If you are looking for fun activities in Newburyport this winner, the members of the arts community have designed the perfect winter weekend for families in Newburyport. Visit www.newburyportartscollective.org/posts/create-a-family-holiday-weekend-in-newburyport.

To join or support the Newburyport Arts Collective, visit its web site www.tinkerhaus.com