Historic Carousel Returning To The Beach 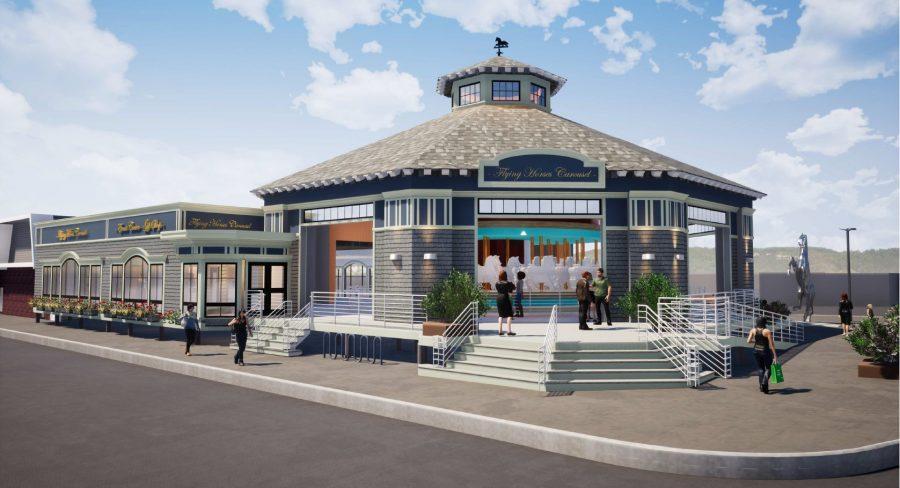 SALISBURY – For six decades of summers, families from throughout the East Coast flocked to the beach here to enjoy the sand, sun and crashing waves. But if asked what they remembered most about Salisbury Beach, many beachgoers would likely say the Broadway Flying Horses.

The horses, hand-carved by the master German carver Charles I. D. Looff, are long gone and the lure of the once popular beach has waned. The Salisbury Beach Partnership is trying to bring back Salisbury’s glory days, notably by filling the void left by the departure of the Broadway Flying Horses with a new, historic 44-horse carousel.

The town’s Planning Board last week approved the construction of a new 6,600-square-foot pavilion at 7 Broadway to provide a permanent home year-round for the carousel. Several of the horses were on display last month at the SeaFestival of Trees.

The partnership began clearing the once-vacant site weeks ahead of the board’s vote.

“Now, this stunning 112-year-old piece of history is here, and we are poised to build its forever home,” said Wayne Capolupo, president of the beach partnership and a leader in the town’s efforts to restore the beach to glory. “The new landmark all-season attraction will create a better, stronger must-see destination for future generations, and bring more visitors and revenue to the region.”

The building, owned by ABCAP Properties, will be constructed “to look authentic both on the inside and outside,” Capolupo said. Historic carousels were house in an octagonal-shaped building with a witch hat roof and cupola on top. “That is exactly what we’re going to build here,” Capolupo said.

Hand-carved in 1909, the wooden carousel was purchased by the Salisbury Beach Partnership in 2019. It was brought to Salisbury from Pennsylvania and reassembled for the day, when it is expected in the spring of 2023 to take its first riders for a spin.

The carousel building will be across the street from the Welcome Center and Comfort Station, now under construction, and next to Gracie’s Bar and Grill.

“It’s going to set the tone that Salisbury Beach is back, and very family oriented as it once was. If we’re going to come this far, we might as well go that extra mile and make it really top shelf,” Capolupo said.

On about a quarter acre, donated by the Capolupo family, the new building is also designed to provide space for events and a “micro branch” of Newburyport Bank, which gave the lead gift of $250,000 to the partnership.

In its announcement of the gift, Newburyport Bank said the “virtual branch will provide the amenities of a full-sized financial institution in a smaller footprint with an emphasis on high-tech interactions. By incorporating the latest technology, the micro branch will offer secure face-to-face virtual meetings with a bank representative in a relaxed, convenient space.”

Looff was a German master carver who created carousels and amusement rides in the Coney Island style. After immigrating to the U.S. in 1870, Looff built the first carousel at Coney Island in 1876. During his lifetime, he built over 40 carousels, several amusements parks, numerous roller coasters and Ferris wheels, and built California’s famous Santa Monica Pier.

The Broadway Flying Horses were initially located at Coney Island until 1905. They were relocated to Salisbury Beach in 1914. In 1976, they were sold and moved to Seaport Village, San Diego, CA, in 1980, according to the Wikipedia page on Looff.

Salisbury Beach Partnership will continue to raise up to $1 million in funds to house and preserve the carousel.

The Partnership, which creates and promotes initiatives to revitalize Salisbury Beach Center and realize the vision of a new Salisbury waterfront, has launched an Adopt A Horse program for local businesses, organizations and families to sponsor a carousel animal for 20 years.