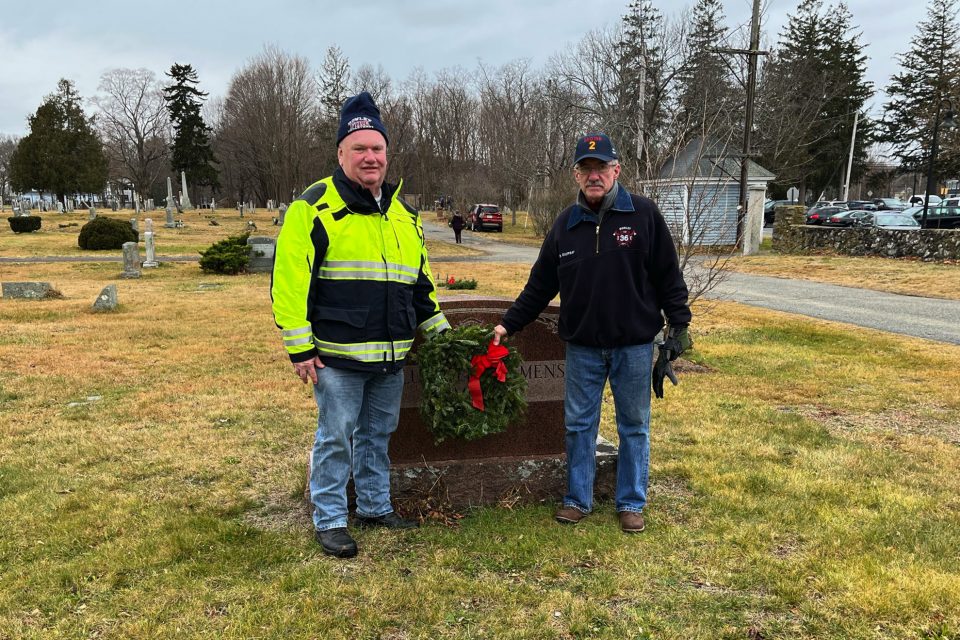 ROWLEY – A week before Christmas, dozens of volunteers gathered in the Rowley Burial Ground next to Town Hall and the Library to remember and honor 500 veterans who are buried there with a wreath and a kind word.

The event was also designed to teach the next generation about sacrifice and honor and the value of freedom, organizers said.

The first year for the event in Rowley was one of more than 3,000 held nationally by Wreaths Across America where millions of Americans gathered to remember and say thanks.

“The freedoms we enjoy today have not come without a price. Lying here before us and in cemeteries throughout this nation are men and women who gave their lives so that we can live in freedom and without fear,” said Tammy Garron, co-coordinator of the event along with her husband, Ron, and Jennifer Gately, a veteran herself.

In its first year, the Rowley’s Veteran Committee, chaired by Bob Braker, retired U.S. Coast Guard Senior Chief, working with the Rowley Volunteer Fire Protection Assn., collected about 600 wreaths to place on the graves of 500 veterans buried in the Rowley cemetery.

That means the committee has about 100 wreaths stored for next year’s event.

Also on Saturday, the Newbury Scout Troop 44 for the third year placed wreaths on veterans’ graves in Newbury, Byfield and Newburyport. The ceremony was held at 9 a.m. at the Byfield Community Arts Center and was followed by the wreath placements.

“Today, more than ever, we reflect on our nation’s veterans and active-duty service members who have had and continue to fight to protect the innocent and oppressed,” Ron Garron said. “This nation has always been the first to stand up for the freedom of people from around the world. Many of you here today have answered that call and served your country well. For this, we say, “Thank you, and we are honored to know you.”

National Wreaths Across America Day, whose mission is to remember, honor and teach, coordinates wreath-laying ceremonies at Arlington National Cemetery and at locations in all 50 states, at sea and abroad.

Wreaths Across America is a national program honoring the fallen veterans that began in 1992, when Morrill Worcester, owner of Worcester Wreath Co. of Harrington, Me. had a surplus of wreaths at the holiday season ended. Remembering a visit to Arlington National Cemetery when he was a 12-year-old paper boy for the Bangor Daily News, he offered the extra wreaths through U.S. Sen. Olympia Snowe to honor veterans at the national cemetery in Virginia.

Sgt. David MacMullen with the Rowley Police Dept. asked each volunteer who placed a wreath on a grave that they call out the veteran’s name and thank them for their service. “It’s a small act that goes a long way toward keeping the memory of our veterans alive,” McMullen said.

“Remember, we are not here today to ‘decorate graves,’ McMullen said. “We are here to remember not their deaths, but their lives. Each wreath is a gift of appreciation from a grateful America. These live balsam fir wreaths symbolize our honor to those who have served and are serving in the armed forces of our great nation and to their families who endure sacrifices every day on our behalf.”

Saying it was an honor to be at the event, Tarr said, “We will not forget our obligation to these men and women.”

Tammy Garron, who also thanked the town of Rowley police and fire departments, the highway department and the cemetery and grounds department, told the crowd, “Our Nation stands as a shining beacon of liberty and freedom to the world. We thank those who gave their lives to keep us free, and we shall not forget you. We shall remember.”