Clemenzi Family Turns It Up For Christmas 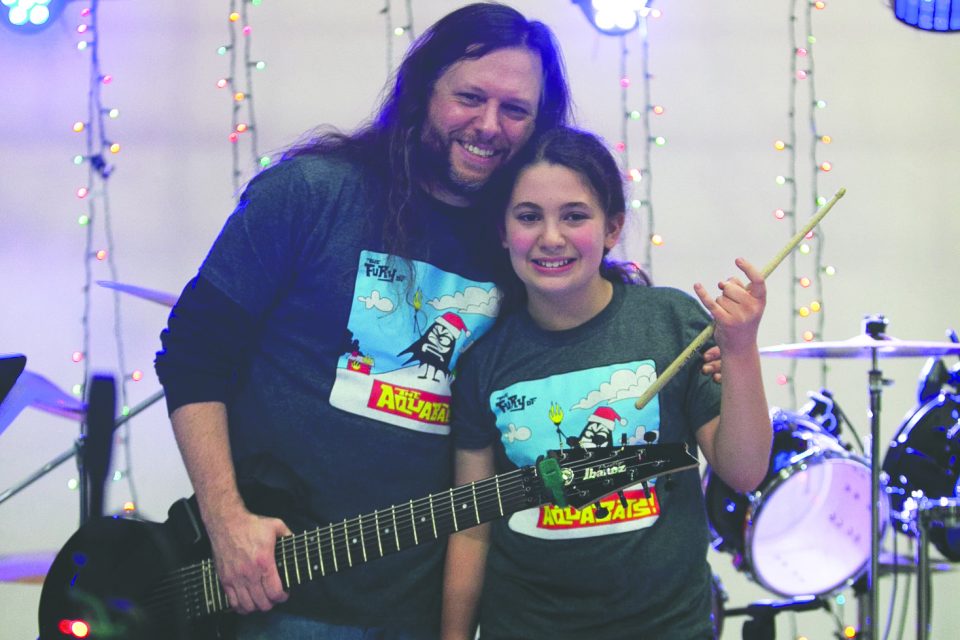 Photo: Libby O'Neill / The Town Common. Father and son Eric and Xavier Clemenzi, 12, stand together after the Christmas Benefit concert.

GEORGETOWN – Through the pandemic, lockdowns, and the assorted ups and downs of the past two years, Georgetown music teacher Eric Clemenzi and his son Xavier have never let the music stop.

In fact, over the past several months, Eric and Xavier, 12, have turned things up to 11, releasing a rocking new Christmas album and playing a benefit concert at the Georgetown Youth Community Center over the weekend.

Eric, an accomplished guitarist who has played in bands such as the Eagles tribute band Dark Desert Eagles with several members of Extreme, is a Berklee graduate with a love of teaching who runs Clemenzi music in Georgetown.

Xavier was practically born with a pair of sticks in his hand and masters prog, metal, and other classic drum tracks at a wicked pace.

“I’ve been teaching since I was like 15,” said Clemenzi. “I started out at my folks house teaching, and then I was hired in Newburyport at a studio over there for a few years, and then in 2004, I just started doing my own thing.”

Eric teaches about 80 to 90 lessons a week, mostly out of his studio at the Eagle Building in Georgetown.

“Then the other time is spent with Xavier, and we started working on (the Christmas album) in June,” said Eric. “We kept working on it, and finished it in mid-October.” 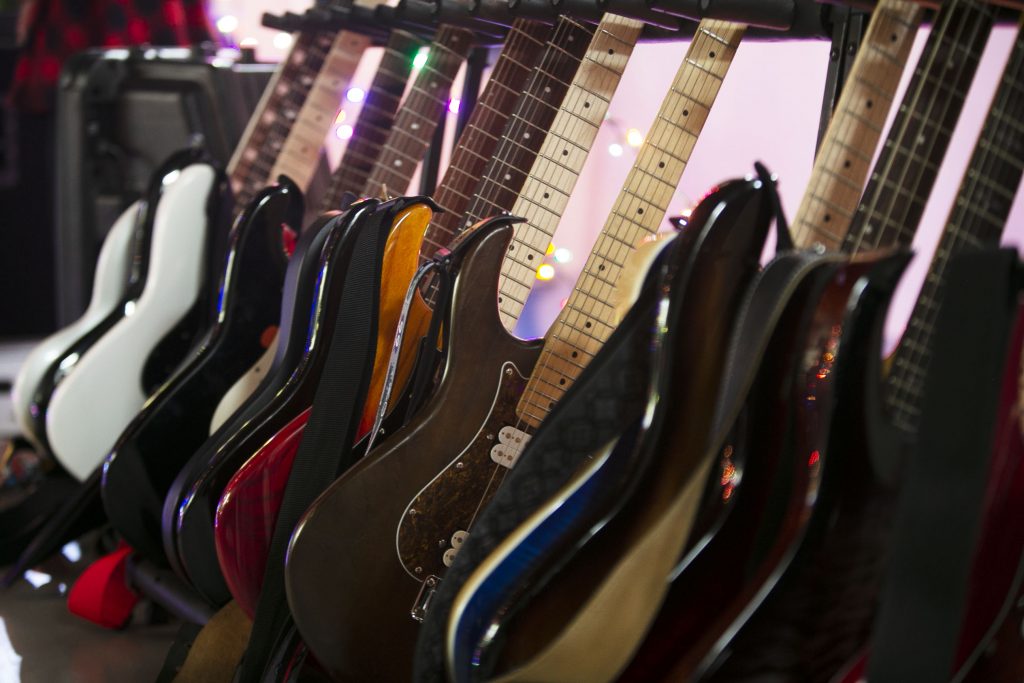 Guitars of all the performers lined up before the show began. 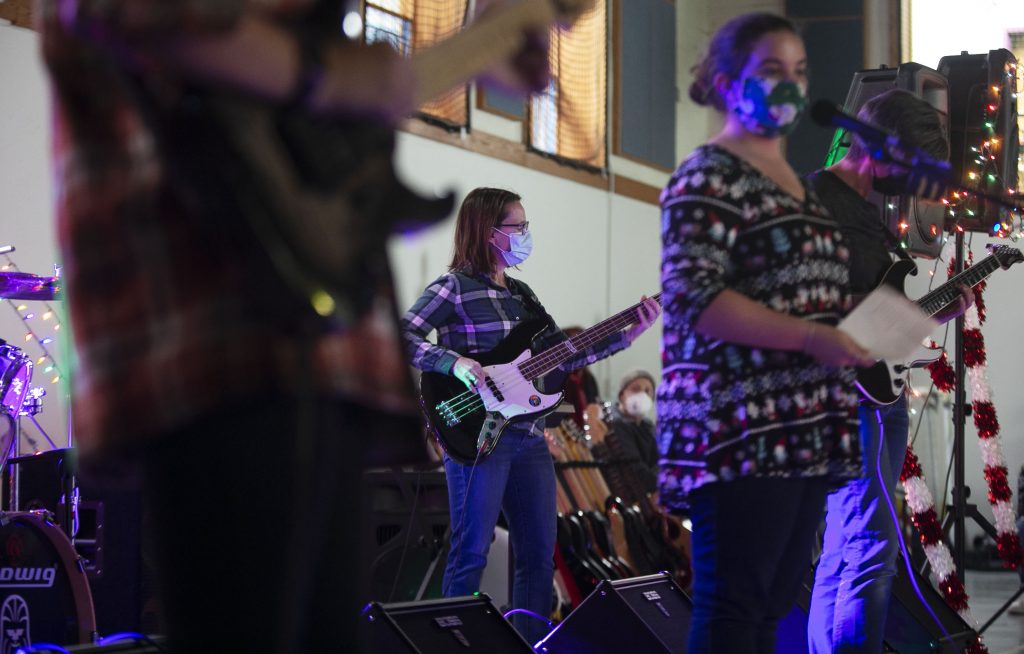 Lisa Colbert rocks out on the bass. 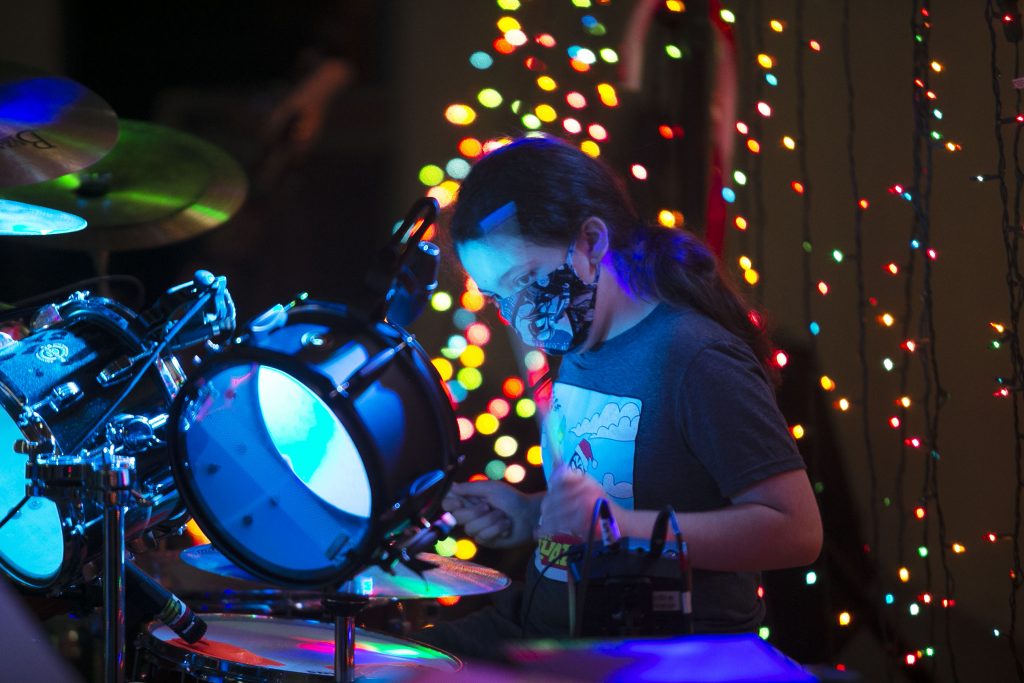 Xavier Clemenzi fills his duty as the one and only drummer during the concert, keeping the beat for the entirety of the show. 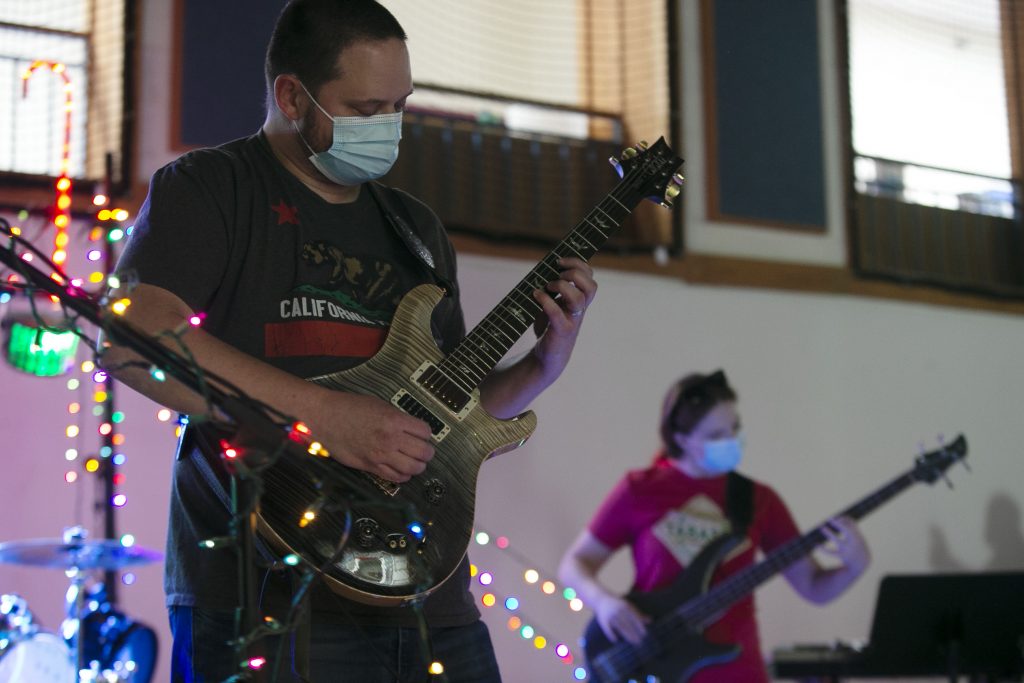 Husband and wife, Erik Golobic and Eilis Karr, show off their musical talents. 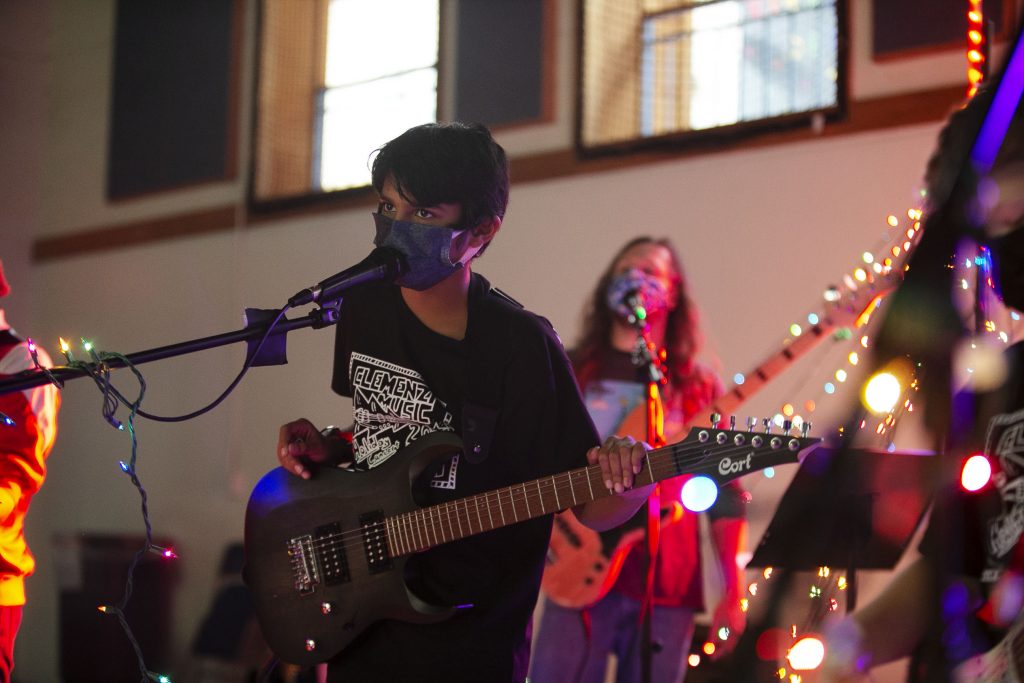 Shah (12) takes center stage doubling as lead singer while also playing guitar along with his peers. 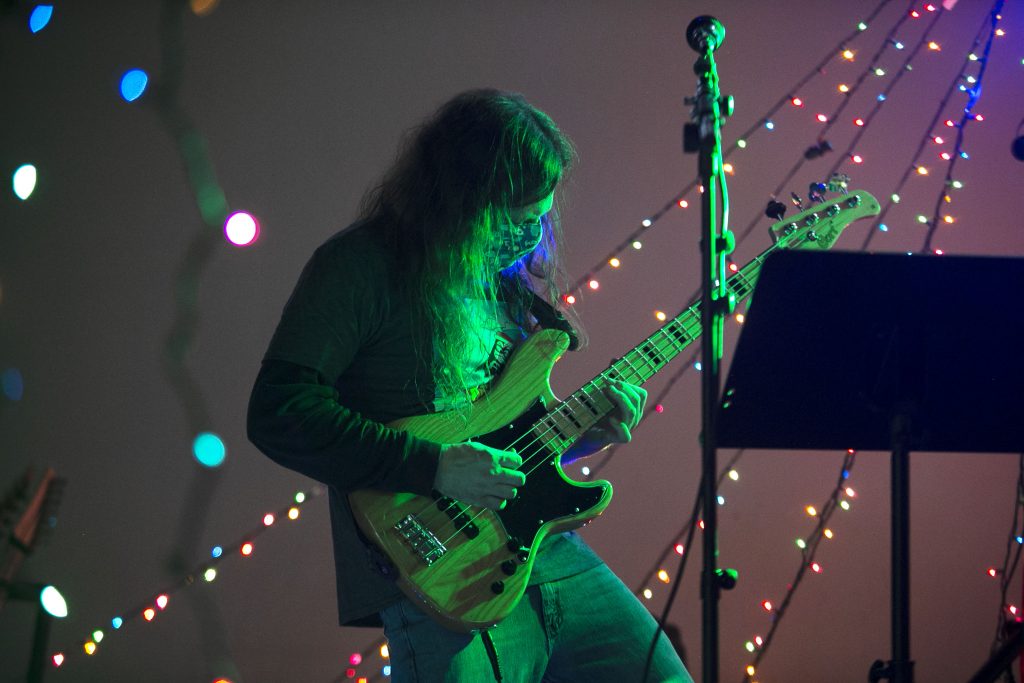 Eric Clemenzi concentrates as he plays background for one of the rock band groups.

The album, Clemenzi Christmas, is available through the Clemenzi Music bandcamp page at clemenzimusic.bandcamp.com, and features a number of traditional holiday tunes fired up in some decidedly non-traditional arrangements, including a fist-pumping, arena-rocking O Tannenbaum. In addition to Eric’s guitar and bass and Xavier’s drumming, the album also features some vocals from the junior member of the family, 7-year-old Olivia. Half of the net profits from the sale of the Christmas album are being donated to the Georgetown Youth Community Center.

The gateway to a life of loving, playing, and teaching music was opened by a bunch of daydream believers.

“The thing that got me into guitar was actually seeing the Monkees on TV,” said Eric. “Then when I was in sixth grade, some guys came over to the school from the Triton High School Band and they played a song by guitarist Eric Johnson, Cliffs of Dover, his most famous song. I knew that was what I needed to do; that literally pulled the trigger.

“That got me into music, and I never looked back from the age of 12, that was what consumed me and my life.”

When he was attending Berklee, Clemenzi had already been teaching guitar for years and knew that was what he wanted to continue to do.

“I was doing the music education program and I realized partway through it that I just wanted to teach guitar,” said Eric. “You had to play saxophone, trombone, violin and piano, and I have no interest in those instruments. So it was really difficult because when I was at Berklee I was coming home on weekends and teaching.”

With the help of a sympathetic professor, however, Eric said he was able to continue teaching through his final year at the school while completing a final project to earn his degree.

From the beginning, Eric said all his experiences in music are centered on how it will help his teaching, from playing before over 1,000 people at the Hampton Beach Casino with Dark Desert Eagles, to a regular gig playing a preschool music class with Xavier at the Ipswich Public Library, to recording albums with family and students.

“All these experiences add up to what you can bring to your students,” said Eric. “For me, the one thing I love about teaching is the immediate response that you get from a person.”

While it took Eric until he was in sixth grade or so before he knew he was going to dedicate his life to music, for Xavier, the signs were there from even before the beginning.

“I’ve been drumming since before I was born,” said Xavier. “I hit stuff when I was little, I had a small drum kit and some sticks and we would put on Rush songs and I would just smash everything around.”

The part about Xavier laying down the percussion since before he was born is no lie, said Eric.

“Before he was born, I would take my guitar and I put it on my wife’s stomach so he could feel the vibrations, and you could feel him kicking me whenever we played music,” said Eric.

Over the years, Xavier’s drum kit got a little bigger and the playing a little more complex.

During the pandemic, Xavier has released a series of YouTube videos where he rips through classic rock tracks from the likes of Rush and Freak Kitchen, an experimental rock band from Sweden that’s big in Europe. Xavier’s playing of the Freak Kitchen songs has even gotten him high praise from the band’s fans and the band members themselves.

With the exception of the world being put on pause for the pandemic last year, and one year when his studio flooded, Eric said he’s been organizing and playing Christmas benefit concerts since 2008.

“For this concert, I was approached by the Georgetown Youth Community Center and they said we really want to try something with you, is there anything you can do to help bring people to our center?” Eric said. “Since things were kind of lightening up a little bit with Covid, I said okay, how about this, let’s start a Rock Band program.”

Although Eric had been teaching students of all ages for years, he said he had always been hesitant to start a Rock Band program because having a good drummer onboard is integral to the process.

“So we had a good drummer right here, and I said, Xavier, what do you think?” Eric said.

With Xavier giving the okay that he was willing to lay down the beat, Eric then divided the program into four groups, with seven- to nine-year olds, 10- to 13-year olds, 14- to 16-year olds, and an adult group.

“Each group put together songs and they were the headliners of the show,” said Eric. All his other music students also had the opportunity to play one song apiece.

As the house drummer for all the bands, Xavier had to learn a staggering 32 songs for the show.

Xavier said the toughest song he had to learn for the show was Subdivisions by Rush, a song where the classic rock/prog band decided to throw a little bit of a new wave curve into the proceedings.

“That one, it’s like a disaster, that whole song,” Xavier said.

In addition to playing behind all the bands and students, Xavier also took over vocal duties on some Iron Maiden songs, another one of his favorite bands.

“He knows all the lyrics, so yeah, he said he’d sing all this crazy stuff and do the drums at the same time,” said Eric. “So, it’s a great experience for him, but I think it’s also been great for my students. All the kids, all the people who are playing, everyone has gotten so much better.”