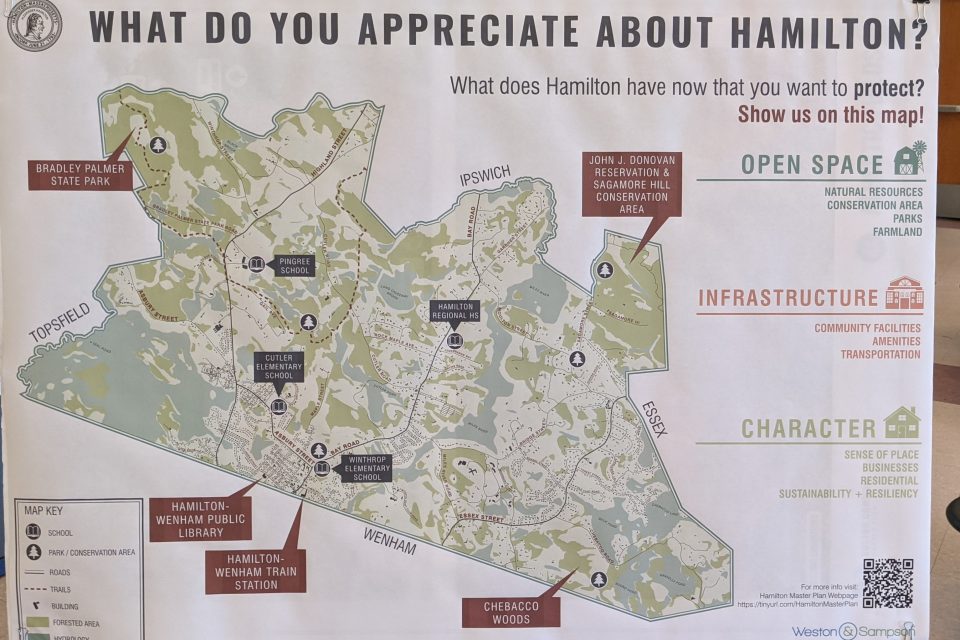 To keep it that way, and to balance growth with protection of its abundant natural resources, takes work — and that’s what residents are being asked to do as the town undertakes an update to its Master Plan.

On Saturday, Nov. 13, about 60 residents, town officials, and consultants attended a Master Plan visioning session at the Miles River Middle School. During the session, residents broke out into small groups to brainstorm over what they would like to see enhanced in the town, from natural resources and open space to transportation and utility infrastructure; and how they would like to see the town grow.

The town’s Master Plan, a document that sets a vision and planning tools and principles to achieve that vision, was last updated in 2004.

“It’s time to republish again and take stock of where we are as a town and what our vision is for the future,” said Selectman Rosemary Kennedy.

The master planning efforts got underway in June, when the Master Planning Steering Committee and Weston and Sampson, the project’s consulting firm, began planning the elements that will make up the final plan. In September, the initial public engagement phase, which included the Saturday visioning session, began.

The project timeline runs through September of next year, when there will be a public event to present the final plan. Over the next several months, the steering committee and Weston Sampson will be taking the public input to include in draft elements of the plan. Several public input and review sessions are planned during the spring and summer of 2022.

Master Plan Steering Committee Chair Jack Lawrence said the role of residents in the process should not be underestimated.

“We want to hear from you and what you value and what you don’t like,” said Lawrence. “You, as the citizens, run this town; the Select Board is not a collective mayor, it is getting its marching orders from the voters at Town Meeting. By the same token, showing up is not just welcomed, but encouraged.”

The goal of the process, Lawrence said, is not to write a document that will be placed on a dusty shelf, but to present a distillation of the thoughts and suggestions of the residents as the basis for a strategic plan going forward for the next decade.

A master plan is a guidance document that helps residents understand what they want to do as a community, said Jim Riordan of Weston and Sampson. He said it is a tool that can be used by developers, local leaders, and boards and committees to help understand the community vision for the future.

A master plan lays the groundwork for all the policy documents informed by it, Riordan said.

Some of the more popular responses to what residents said they would like to see protected included the town’s participatory form of government, open space such as Appleton Farm, water resources, maintaining a small town feel and rural character, and keeping low density in the town while also having an active downtown area.

Resident John Despic said that in addition to may of the areas that were brought up before him, he was interested in knowing if there was a way that Hamilton residents could take a look at development and growth that abuts its boundaries.

“For example, there is a controversial project going into Ipswich right now, an office park,” said Despic. He said it might make sense to have at least some kind of informal, more regional opportunity to address issues and express views on growth that impacts more than one community.

One of the main themes that came up when discussing the growth of Hamilton was the need to balance conservation and development.

“We’re people who feel development comes at a price, you don’t want too much of it, but some of it might be required,” said long-time Hamilton resident Bob Woodbury.

Shelby Thompson said her breakout group focused on environmental and multicultural planning and vision when it comes to growth in Hamilton.

“Specific goals we had centered a lot on sustainability, the lofty goal of becoming a carbon-neutral town,” said Thompson. “We talked a lot about solar, green energy, a dream of having the downtown utilities underground. We talked about bike culture and fostering bike culture with bike lanes and people feeling safe doing that.”

For those who couldn’t make it to the Nov. 13 visioning session, there are still plenty of opportunities for Hamilton residents to get involved in the process.

Weston and Sampson has a website with plan updates and the event calendar available at tinyurl.com/HamiltonMasterPlan. There is also a followup survey that was sent out following the visioning session to every Hamilton household, according to Lawrence.