‘Bodies’ Found Where Former Selectman Wants to be Buried 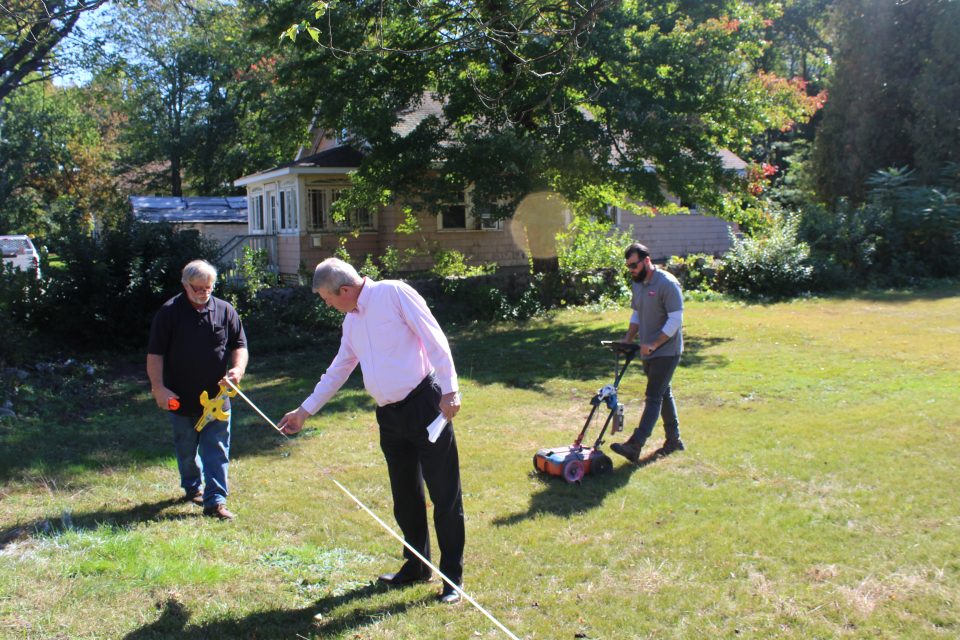 SALISBURY – Former town selectman Charles Geary’s 20-year quest to be buried among the town’s founders in the historic Colonial Cemetery may have come to an end.

The town appears to have discovered four “objects,” probably the bodies of earlier Salisbury residents or North Shore visitors, are already in the gravesites that the 85-year-old Geary selected and may have paid for.

A ground penetrating radar, a machine that looks like a small lawnmower, found what appears to be caskets buried in the northeast corner of the cemetery at Ferry and Beach roads.

“I consider this aspect of the matter to be moot at this point,” wrote Town Manager Neil Harrington to the Town Common. “I spoke with Mr. Geary about these findings and informed him that as a result of the underground radar testing, the Town would not be able to fulfill his request to be buried where he purchased his ‘plot’ about 20 years ago.”

Geary could not be reached for comment whether he plans to pursue the matter. Earlier in an appearance before the town’s Cemetery Commission, he said, “For 20 years I have planned for that to be my final resting place.” Asked why he wanted to be buried in the old cemetery, Geary said, “I feel that it is a place I’d like to be.”

The town has offered him two burial plots in the town-owned Long Hill Cemetery, which cost $900 each today, but Geary said earlier he would accept those plots “only as a last resort.”

The town spent $900 hiring GPRS, a company that specializes in finding objects such as utility pipes below ground, to see if bodies were already in the gravesites where Geary wants to be buried.

“As you can see from the image, there are four ‘objects’ in the area that was tested, one of which is clearly in the same area where Mr. Geary wishes to be buried, and two more objects are not that far away,” Harrington wrote. “Without excavating the areas where these objects appear on the radar, we don’t know exactly whether these are unmarked grave sites, but from the shape of the images and the fact that we are talking about a graveyard, the Town’s position is that it is most likely that they are.”

The controversy began earlier this fall when Geary asked Lisa DeMeo, the town’s public works director, who oversees maintenance of the cemetery, about installing headstones on the gravesites he was having made on the gravesites.

When told there was no record of his purchase, Geary brought a map of the two gravesites in the northeast corner of the cemetery that he said he purchased. The map, dated March 20, 2000, was drawn by hand on a piece of stationery from the town’s public works department.

The problem is that the town believes the old Colonial Burial Ground has been closed to new burials since 1908, but Harrington has not found a vote by the Board of Selectmen or a Town Meeting closing the cemetery to new burials.

Town officials said they have no record of the sale, and Cemetery Commission Gordon Frost said he has never seen a deed for a burial plot that looked like the one Geary submitted. The records may have been destroyed when the basement of Town Hall flooded several years ago, he said.

Tom Tatro, chair, and Connie Hellwig, vice chair of the town’s Historical Commission, believe the town closed the cemetery in 1908, shortly after the Long Hill cemetery was opened.

“I thought this would be grandfathered,” Geary told the Cemetery Commission.

Geary, who has lived in Salisbury for 40 years and served as selectman for 14, asked Don Lesvesque, then the town’s public works director, if he and his wife, Barbara, could be buried in the Colonial Burial Ground.

Laid out in 1639, the cemetery at the corner of Beach and Ferry roads was known as the First Cemetery, Old Burying Ground and Old Corner Burying Ground. It is the oldest cemetery in town and the resting place for several of Salisbury’s founders, including Major Robert Pike, one of the town’s first residents and first ministers.

It may also be the final resting place of at least three pirates who washed ashore on Seabrook, NH, beach and were buried in Salisbury’s cemetery.

Lesvesque, who retired as DPW director several years ago, told Harrington that he sold Geary two 4-by-10-foot gravesites for $750 on March 21, 2000.

“Don shouldn’t have sold any lots in there,” said Frost, who chairs the cemetery commission. DeMeo said Lesvesque did not have the authority to sell any burial plats in the closed cemetery.