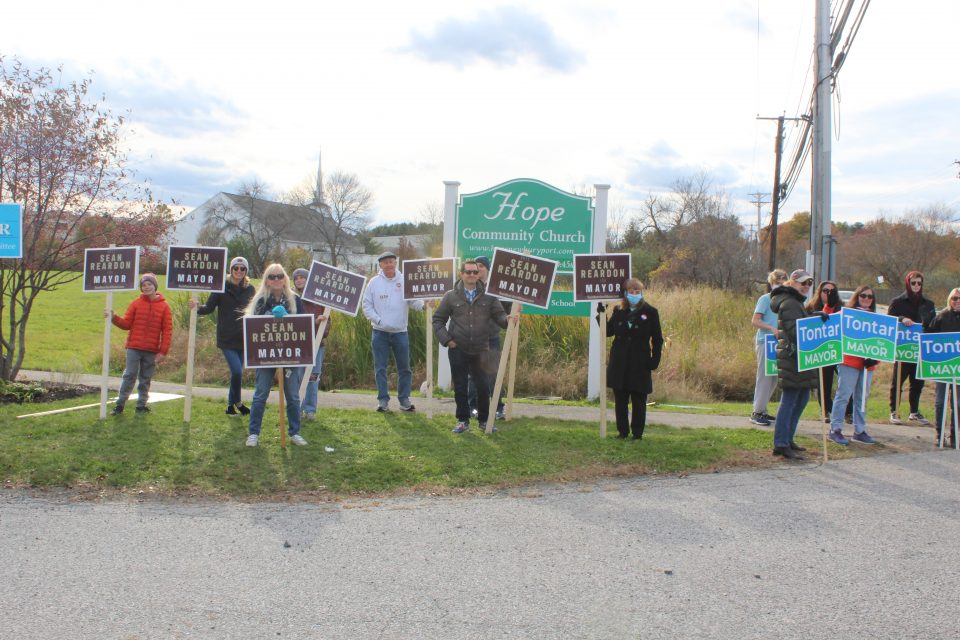 Photo: Stewart Lytle / The Town Common. Outside the Hope Church in Newburyport.

REGIONAL — The two cities in the region will be led by Sean Reardon for four years and Kassandra Gove for another two years. Both were elected last week in somewhat unexpected victories.

Reardon, who will replace 12-year-Newburyport Mayor Donna Holaday, defeated veteran city councilmember Charlie Tontar, who led by 22 votes the three-person field in the primary earlier this fall. Reardon received 3,204 votes to Tontar’s 3,182, about half of the 12,000 voters in the city.

City Clerk Richard Jones said Tontar has not asked for a recount.

In Amesbury, Gove, who was running for reelection to her second, two-year term defeated state Rep. James Kelcourse by more than 1,000 votes – 3,611 for Gove to 2,307 for Kelcourse.

Gove improved her victory margin over the popular state legislator, defeating him by more than 1,300 more votes than she beat then-Mayor Ken Gray in 2019.

In the race to fill the vacant seat by retiring Rep. Brad Hill, Topsfield Democrat Jamie Belsito and Rowley Republican Bob Snow are set to face off in a special election Nov. 30 for the seat that represents Hamilton, Ipswich, Manchester-by-the-Sea, Rowley, Topsfield and Wenham.

Hill resigned in September to join the Massachusetts Gaming Commission.

Gove received 3,611 votes to 2,307 for Kelcourse, according to unofficial results. The mayor also improved her margin of victory compared to her win over then-Mayor Ken Gray in 2019. The former head of the Amesbury Chamber of Commerce won her first term as mayor by less than 200 votes.

Kelcourse will remain as the state representative for Amesbury, Newburyport and Salisbury. He has been in the legislature since 2015.

In Newburyport, Reardon will oversee the final stages of the Market Landing on the waterfront, including raising at least $8 million for construction. The city council has approved the preliminary design for the park.

Another campaign issue is repairing streets and sidewalks that have been neglected for lack of funding. Other issues include the perennial Newburyport issues of negotiating with New England Development regarding the future of Waterfront West and addressing problems related to the jetties and Plum Island erosion.

Gove has the opportunity to attract new businesses to town, including the Maples Crossing sports and lifestyle center.

If she runs for reelection again in 2023, she will be seeking a four-year term, not just two years. The lengthy term was approved this year on the ballot question by a vote of 3,965 to 1,794.

The second ballot question was approved 4,255 to 1,396 and will make the School Committee chairmanship a position elected by the committee. Now the mayor automatically serves as chair of the school committee, which Reardon will in Newburyport.