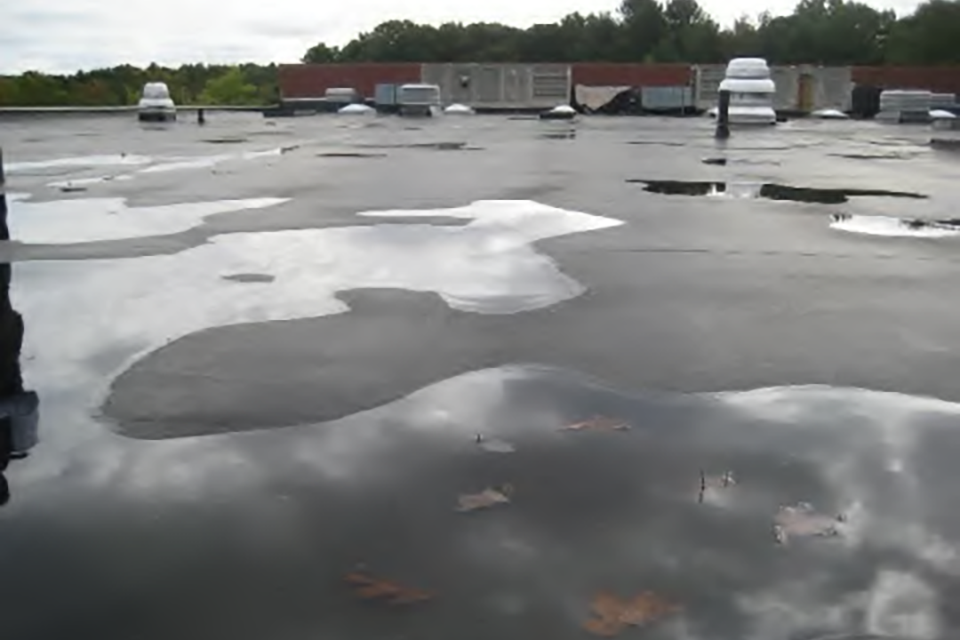 TRITON REGIONAL SCHOOL DISTRICT – After a rainstorm like the Nor’easter that rolled through last week, a Zamboni-like machine the size of a riding lawn mower scrubs and squeegees the floors removing water in sections of the Triton High School/Middle School.

The windows, particularly on the north and east sides of the building, leak badly. They were installed in concrete in 1971, when the school was built, and cannot be replaced.

Some days a second-floor music room might be used as a swimming pool. An electrical panel, rebuilt during a renovation in 2000, also can no longer be repaired. During electrical outages, the school must call specialists wearing arc suits to keep from being electrocuted while make repairs.

The acoustic tiles in classrooms are stained and sagging. The parking lots, sidewalks, patios and driveways are cracked and have large puddles. The nine rooftop air handling units use R-22 refrigerant cooling, which stopped being produced almost two years ago.

The high school and middle school building in Byfield, which celebrated its 50th anniversary this year, is falling apart. It requires extensive and expensive patches such as repairs to the rubber membrane roof that has cost the school district hundreds of thousand of dollars in recent years, Superintendent Brian Forget said last week.

An updated study of the 286,000-square-foot building by Habeeb & Associates Architects of Worcester concluded that repairs to the building would total $61.5 million and are increasing about 4 percent per year.

Forget told the District Communications Committee (DCC) last week that the major systems in the building are obsolete, having exhausted their life expectancies. Making piece-meal repairs “is throwing good money after bad,” he said in an interview with the Town Common.

Although the three Triton towns – Newbury, Rowley and Salisbury – have known about the worsening building issues since before the Pandemic, talks between the school and town leaders have intensified in recent weeks. The question is whether Triton should apply to the Massachusetts School Building Authority (MSBA) for help in making repairs to the existing building or replace it with a new, more efficient building.

The reaction from the towns and school committee to the hefty price tag for repairs has ranged from “shock and awe” to an acceptance of reality. “No one likes it,” Forget said.

“To get to a good place, we have to go through some dark spaces,” he said.

The Rowley Board of Selectmen voted last week to ask the MSBA for help. Forget meets with the Newbury Selectmen and Finance Committee on Nov. 9. No meeting has been scheduled with the town of Salisbury. Wilma McDonald, the vice chair of the Salisbury Select Board, said the town wants to hold a select board workshop before it meets with the Triton superintendent.

The DCC meets again on the building Nov. 18.

The good news is that the current building is debt free. The district paid off the mortgage on a 1998-2000 expansion last year. And if Triton is selected by MSBA for either a new or repaired building, the independent state agency, which is funded by 1 cent of the state’s sales tax, would pay for at least half of the costs. The towns would have to pay the balance.

The MSBA paid 54 percent of the costs to rebuild Pine Grove Elementary School in Rowley. Selectman Joe Perry said partnering with MSBA was “a lucky thing” for the town, which picked up the balance of the costs.

A new building might be smaller than the current one. Triton, like most North Shore school districts, has watched its student population decline in recent years. When this building opened its doors in 1971, Triton welcomed 1,700 students. Today, enrollment is about 1,000 students.

“MSBA may come back to us and say it makes more sense to build a smaller building,” Forget said.

Triton’s application must be submitted between January and April next year. The agency would take six to eight months to decide if it will welcome Triton to apply for funding. That means Triton would have to wait until December to learn if it was selected.

In the interim, Triton students and staff must continue to live with the current conditions of the building.