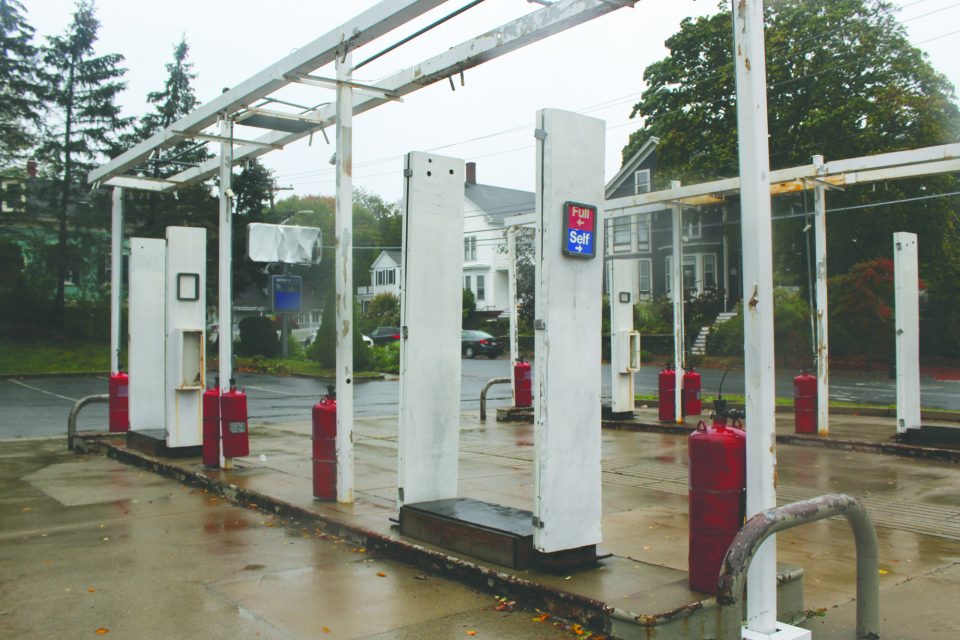 Jeff Roelofs, the attorney for Global, pointed the finger at ExxonMobil, which operated the gas station for decades and still operates a thriving station on Storey Avenue. In its deed of sale to Global in 2010, Exxon Mobil banned any residential use for the gas station property, he told the council in a special hearing.

The gas station, which shut down in May 2018, is what one neighbor called “an absolute horror” and “an eye sore” on a gateway to downtown Newburyport. It is on the same street with some of historic Newburyport’s most admired mansions, many of them built for wealthy sea captains, ship builders and maritime business owners.

Neighbors complained that the grass beside the station had not been mowed until recently, snow and ice were not removed for the last several winters, trash cans overflowed, the station’s sign on a tall pole might fall, and the property has become a haven for “suspicious activities.”

The city council is considering declaring the property a nuisance or a danger to the neighborhood and taking action that ranges from forcing the sale of the property, altering it or regulating its management.

Global with headquarters in Waltham operates gas stations and convenience stores as well as oil pipelines and storage terminals.

Roelofs, a Newburyport environmental and land use attorney, asked the council to delay taking action against the company for 30 or 60 days to allow Global to make repairs and maintain the property. “We want to be a good neighbor. We are committed to turning things around,” he said.

Global has contracted with a company to have the grass mowed and the snow removed, he said. It is installing aluminum covers for the tall sign to dissuade motorists pulling in to buy gas. The company has already installed Jersey barriers to try to prevent parking on the lot or drivers cutting through to avoid the traffic light. And he promised Global would do more.

When the Town Common visited the site Tuesday, the Jersey barriers blocked only the driveways on High Street. There were no barriers on the two State Street driveways and no signs banning parking or drive throughs. Three cars were parked on the property.

Tests of the underground storage tanks have uncovered a relatively small patch of dirt that is contaminated with residue from leaking storage tanks. The attorney promised that the contaminated dirt would be removed before the property is sold. Trees that are dying will also be taken out.

The company would also investigate any other complaints to the city, including one regarding a rock wall that neighbors complained is deteriorating.

After an hour of debate, the council postponed consideration of action on the station until its meeting at 6 p.m. on Nov. 29, which gives Global more than a month to make improvements at the station.

The future of the property was less clear.

According to Roelofs, when ExxonMobil sold the gas station to Global in 2010, it added a provision in the deed that prohibited the land from being converted to residences, which is generally believed will be the most likely use of the property. That provision in the deed can only be removed with ExxonMobil’s consent, which in effect gives the giant oil company veto power over any plans to sell the property to a residential real estate company.

Jaclyn Harrison, communications and public relations director for Global, told The Town Common that Exxon put the deed restriction in to manage its environmental liability. “There is a higher level of cleanup standard for residential use properties that will need to be achieved in order to convert its use,” she wrote in an email.

“The biggest obstacle (to selling the property) is ExxonMobil,” Roelofs said.

Mayor Donna Holaday said there has been at least one offer from a residential developer to buy the property.

“It is going to take time,” Roelofs said. “There are lots of details that have to be worked through with Exxon.”

Roelofs said a development plan that the city would be willing to approve would need to be completed and submitted to Exxon for its approval.