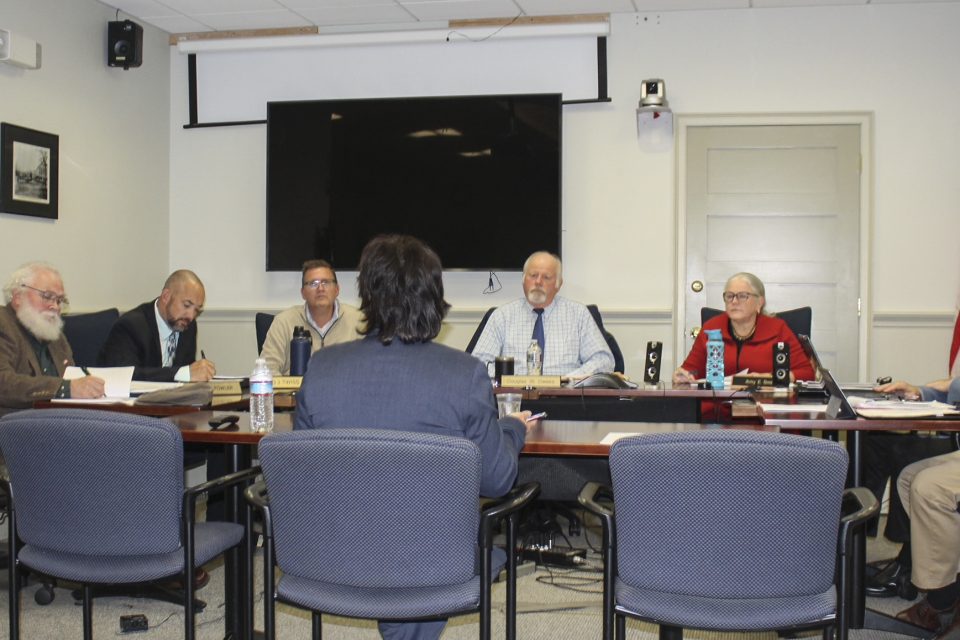 GEORGETOWN – The Board of Selectmen voted four to zero Wednesday night to make a conditional offer to Orlando Pacheco, the town administrator in Lancaster, who would replace Mike Farrell, this town’s administrator since 2010.

After 20 years working in municipal governments, Pacheco, 43, would arrive in Georgetown with a history, including a drunk driving arrest after a bachelor party in 2011 that “got out of hand, at least for me.” He said he wishes he “could go back and change” the incident and promised the select board, “You don’t have to worry about that happening again.”

A former Lancaster selectman was quoted in 2017, praising Pacheco for his “forward thinking mentality,” but did not shy away from saying the decision to hire him a second time as the Town Administrator was “a controversial decision.”

Pacheco was first appointed Lancaster’s Town Administrator in 2005, but his contract was not renewed by the Board of Selectmen nine years later for reasons Pacheco said he was never told. After two of the selectmen were recalled in a town election, Pacheco was invited to apply for the position again in 2017. In the interim, he was Haverhill’s purchasing agent, energy manager and facilities manager.

More recently, Pacheco had a tiff last summer with the three-member Lancaster selectmen over their negative evaluation of his performance. His job evaluation in July by the Lancaster Board of Selectmen gave him an overall rating of 2.3 out of 5, which is called “woefully unfair.”

The Georgetown offer is conditional subject to the town and Pacheco reaching a contract agreement and following a review of an independent background check on Pacheco.

Pacheco, who lives in Rockport, was the fourth candidate to be interviewed for the job. When Chairman Douglas Dawes asked the other selectmen if they had a first choice, Select Board Members Amy Smith, Peter Kershaw and Gary Fowler each said, “Number 4,” which was Pacheco. Dawes agreed. Selectmen David Twiss, who is a long-time friend of Pacheco, abstained.

Pacheco, a graduate of the University of Massachusetts-Amherst, earned a master’s degree in public administration from the University of New Hampshire. He has served as an aide to former Mayor David Hildt in Amesbury and in various positions with the town of Andover. He was awarded the bronze and silver congressional award and is a two-time Ronald E. McNair scholar, which seeks to increase graduate education for students from underrepresented segments of society.

As Lancaster’s town administrator, he completed construction of municipal offices, secured large grants for public works projects and green communities projects. Under his leadership, Lancaster is one of the only government entities in the state that has fully funded its employee retirement fund, he told the board. He also increased the town’s stabilization funds and free cash levels to achieve an Aa rating from Moody’s Investor Service, according to his letter to the Select Board members.

He is also certified in Leadership in Energy and Environmental Design and counts as major accomplishments some energy efficiency and renewable energy projects.

Pacheco said that he is particularly adept at securing grants, which he described as “picking pockets.” During his career, he estimated that he has secured about $6 million in grants.

He wrote to the board that “My greatest asset over my 20 years in municipal government has been the support and good working relationships developed amongst department heads, staff and vendors.”

Criticism of his job performance by the Lancaster Select Board members included delivering necessary information at the last minute and the nature of his communications and his schedule. The evaluation praised him for his ability to solve problems and find solutions, according to an article in the Worcester Telegram.

Pacheco was quoted in the article as saying the score on his evaluation was unfair and that it was “particularly shocking” to have his financial management skills criticized when he had obtained “hundreds of thousands of dollars” of grants, had clean audits and set up Lancaster to be one of the only towns in the state to fully fund the employees’ retirement account.

He said there were “contradictions” in the evaluation and some criticisms had nothing to do with him or his job description, according to the article.

It was also reported that in the past, Pacheco has been criticized for inappropriate comments to female employees in addition to being arrested by police for being intoxicated and passed out on his car, which made national headlines.

After his arrest, Pacheco issued an apology. “I sincerely regret the events of the evening that led to my arrest, this lapse in judgment is very out of character for me,” he said. “I have learned a lot from this incident and am participating in the alcohol education program prescribed by the court. I have resolved this incident, which happened in August of 2011, and received the same punishment as most first-time offenders. This has been a difficult lesson for me.”

Pacheco was quoted as saying the incident had not affected his job performance or productivity.

“I deeply regret how these actions have reflected on me and my family,” Pacheco said. “I am, and always have been, 100 percent committed to making sure the duties of my office are performed under any and all circumstances, and that Lancaster remains a well-managed, innovative, and efficient local government. I am grateful to my fellow town officials in Lancaster, who have offered me support throughout this difficult time, and appreciate their confidence in my abilities as the town administrator.”

When his contract was not renewed by two Lancaster selectmen in 2014, residents launched a successful recall of the two elected officials. But he was not restored as the Town Administrator, Pacheco told the Georgetown Select Board, because the town had already hired another administrator, which closed the chance for Pacheco to return to his job, until there was a vacancy three years later.

Former Lancaster Select Board Member Mark Grasso was quoted then as saying, “For our board it would be easier to have (the other candidate for Town Administrator) in that position, but Orlando is more capable of executing the vision tomorrow.”

The change in jobs would cut Pacheco’s daily commute from Rockport. To Lancaster, he said, he drives about an hour and a half each way. To Georgetown, his commute would be about 40 minutes.