Will Bike Riders Slow Down in the Waterfront Park? 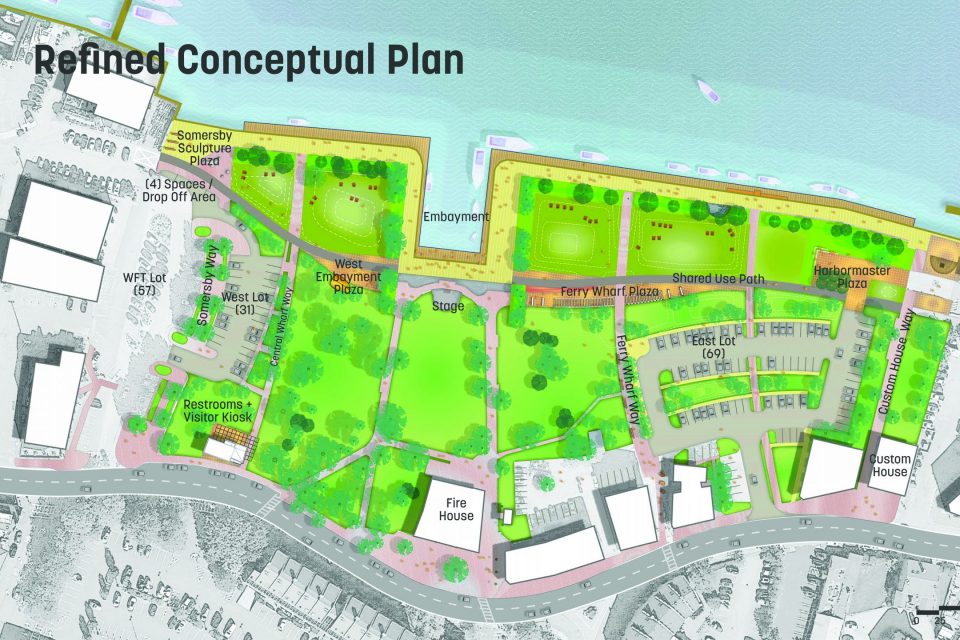 Graphic courtesy of The City of Newburyport

NEWBURYPORT – Will bicycle riders use the 12-foot shared path across the proposed Market Landing Waterfront Park as a superhighway to get a workout, as one city councilor described it? Or will they go slow or even walk their bikes across the park?

That is the question the City Council is likely to grapple with at its meeting on Oct. 25, when it could vote on the future design of the park by the design firm Sasaki & Associates.

Four of the 11 city councilors, who served on a 15-member Ad Hoc Committee focused on the proposed $8 million waterfront park design, voted to support a straight path across the top of the embankment close to the Merrimack River. The alternative design would have the path run in a loop close to the Firehouse Theater.

The four-acre park, a major attraction for tourists and residents alike, stands between the Newburyport and Salisbury rail trails, popular with bicyclists and pedestrians. The city is hoping that bicyclists crossing the park will slow down, particularly when pedestrians are there.

City Engineer Jon-Eric White told the Ad Hoc Committee that if bicyclists race through the park, the city could put up signs. The city erected signs on the Hines bridge across the Merrimack River, instructing bicyclists to walk their bikes across. But from casual observation, that sign is largely ignored and unenforced.

There are a few other points of concern about the current park design, including commercial fishermen, who want to make sure they are not blocked from getting to their boats on the waterfront. But as the design progressed, the major issue has been the shared path route.

“It’s impossible to make everyone happy,” said Matt Pieniazek, vice chair of the Waterfront Trust, which manages the four-acre park, and voted unanimously for the design with the straight path.

Council President Jared Eigerman said, “I do think it would be criminal to go back (to the drawing board) at this point.” Saying the current proposed design has “minimal points of conflict,” the council president supports the straight path.

Eigerman argued that when there are crowds on the waterfront, bicyclists “will not be able to fly through there.”

Council members Sharif Zeid and Heather Strand, both cyclists, also supported the straight path. “That design makes sense,” Zeid said. “I look at this as more a way to transit through, but not really a superhighway for bike riders getting a workout,” he said.

Council member Jim McCauley questioned whether the path should be wider — 15 feet, instead of 12 – to avoid conflicts between park goers on foot and those on bicycles. Kate Tooke with Sasaki Associates explained that the path would have two-foot-wide shoulders, reinforced grassy areas that could support bicycles.

City Planning Director Andy Port in an email to The Town Common wrote that he initially shared the concern about the potential conflict between bicyclists and pedestrians. But he agreed with Eigerman that crowds of people in the park would naturally slow down bicycle riders.

“One response given to concerns about pedestrian conflict at the central embayment was that pedestrian congestion would naturally slow bikers down, thereby effectively negating that concern,” Port wrote.

The Ad Hoc Committee did not seem to feel that the path alignment would conflict with the overall park space though it does bifurcate the area somewhat rather than hugging the outside edge of new park space,” Port said.

The straight path would also avoid removing some large trees and require less grading, he wrote.

Besides, he wrote, bicyclists would probably ride straight across the park anyway. He wrote: “Finally, one primary argument for the Sasaki alignment was that this would be a more natural path for bikers to use year-round, whereas days/weeks/months during the year with heavy pedestrian congestion are more limited” to the summer months. Some felt that a longer outside alignment would simply be avoided by bikers attempting to follow a more natural direct east-west path across the boardwalk at the central embayment, resulting in the same ‘traffic pattern’ anyway.”

If the city council approves the current design, Sasaki will spend the next two months finalizing the design. If funded, construction of the new park could begin in the spring of 2023.