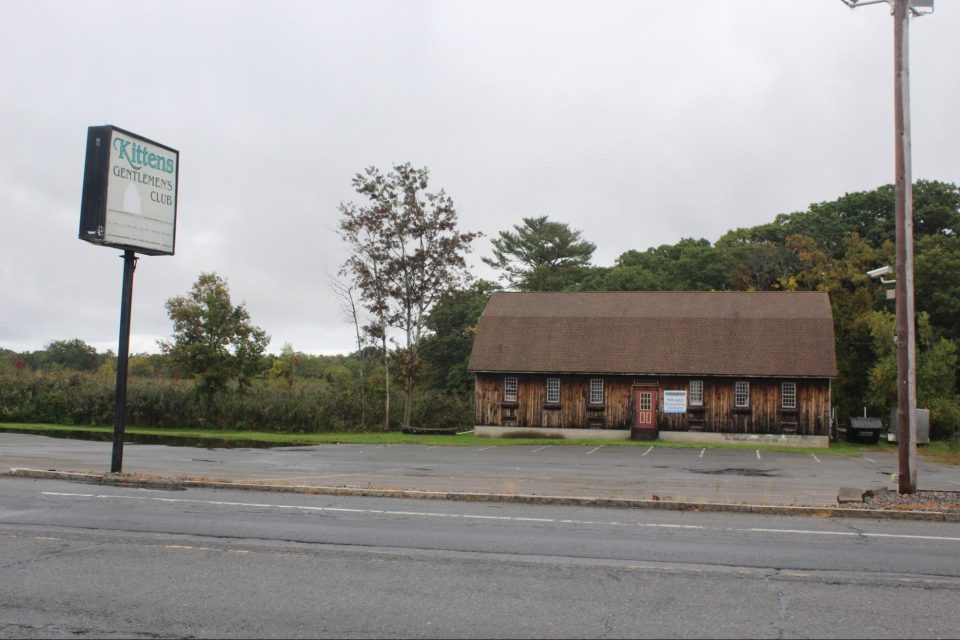 The building next to the Kittens Gentlemen's Club on Route 1 in Salisbury. Stewart Lytle / The Town Common

SALISBURY – When you drive north on Rte. 1, you may have chuckled at the sign in front of the Kittens Club, advertising upcoming performances by strippers with colorful names. The 14-year-old club with its green façade and pink sign says it provides “non-stop entertainment by the hottest all-nude dancers on the east coast.”

But what is the wooden building a few hundred feet away at the rear of the property used for? Is it part of the club? A large, two-story building, built in 1950, with more than 5,000 square feet inside, it looks from the highway like it is unoccupied.

That building, which was once owned by Kittens and used to store extra tables and chairs, has been a warehouse and distribution center for various companies. A Newburyport artifact importer currently leases the building for storage.

Since the early summer, it is in foreclosure and up for sale.

Veteran residential and commercial Realtor Frank Bertolino, who heads the North Shore Realty Group, accepted the challenge in August to try to sell the building next to a strip club. The for-sale sign is strategically placed on Rte. 1 with a red arrow pointing toward the building, making it clear the club is not up for sale.

Bertolino, who was Realtor of the Year in 2020 and is president elect of the area Realtor association, discovered how much of a challenge it is when a friend stopped him at the grocery store to ask why he was patronizing Kittens. The friend had spotted Bertolino’s distinctive black Jeep parked in what he thought was the Kittens Club lot.

After having to explain why his car was in the lot to his friend, Bertolino now parks, when he shows the building to prospective buyers and a curious newspaper reporter, on the southern edge of the lot, as far away from the club as possible.

The building is owned by Crowd Lending Fund in Boston, which bought it for $443,000 from Seacoast Game Distributors at auction earlier this summer. The land is valued at $435,800 and the building is assessed at $158,900.

Bertolino has listed the property at $529,500, but expects it will sell for less.

The building, which is divided into rooms inside and has a large loading dock, sits on an acre lot surrounded on the side and rear by wetlands, which limits its expansion.

Bertolino said he has had several inquiries, including from a non-profit group that needs a large space for rehearsals and performances of plays. But so far, no firm offers have been made.

If you have a possible use for the building, Bertolino would love to hear it. He can be reached at 978-255-4735 or FrankHomeTeam@gmail.com.