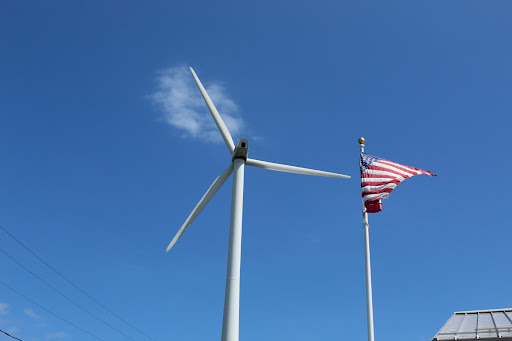 NEWBURYPORT – Veteran City Councilor Barry Connell admitted the idea came to him in “a fever dream.” It envisioned two or three wind turbines spinning a welcome to visitors and residents as they drive north on Interstate 95 to enter this historic seaport city.

“What better introduction to Newburyport,” Connell said, than being greeted by wind turbines or possibly a field of solar arrays. “It would demonstrate the city’s commitment to energy efficiency.”

Several colleagues on the City Council, members of the city’s Conservation Commission and the Planning Board thought Connell’s dream at a meeting last week might better be described as a nightmare.

Stephen Moore, the Conservation Commission vice chair, said, “I don’t know that it is the welcome I want to Newburyport.”

The long, linear stretch of undeveloped land on the east side of I-95 hosts a popular nature walk during the day and, according to Connell, parties for teens and college-age students at night.

Joe Teixeira, Conservation Commission chair, who prefaced his remarks noting that he drives an electric car and has solar panels on his roof, said this site would not be “a great place” for the wind turbines or solar panels. The site has several wetlands, which include the headwaters of the Little River and a beaver swamp.

The nature trail is popular, particularly among birdwatchers, said planning board member Anne Gardner, a self-styled birder. She and others feared that spinning turbine blades would decimate the bird population along the trail.

Planning Board Chair Bonnie Sonntag said she did not have enough information to make a decision. She asked planning director Andy Port to create a more detailed map of the site, indicating where the wetlands are and how close the windmills might be to houses.

Port said it appears that there is room on the publicly owned land for two or three wind turbines or a solar field near Hale Street at the southern end of the tract without harming the wetlands. Private landowners in the Hale Street area may also be interested in leasing land for wind turbines or solar farms.

Another concern that the group voiced was that the turbines might cause light flicker for nearby residents. There has been a long-standing feud in the city over the flicker created for the neighbors of Mark Rickey Woodworking’s turbine near the Rte. 1 Rotary.

Connell said there is a misunderstanding about wind turbine flicker. It is a factor only for those who live east and west of the turbine when the sun is low in the sky, he said.

After almost an hour of discussion, the group proposed scheduling a site walk through the undeveloped land. The next meeting will be held on Sept. 15.